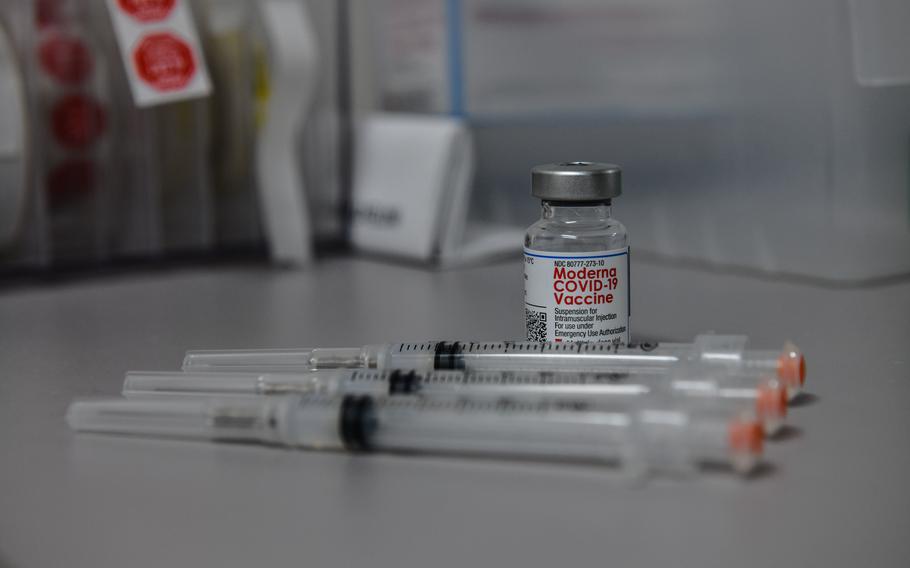 COVID-19 booster shots at U.S. Army installations in Europe will be given only to people in high-risk categories for the remainder of the year. Boosters for all eligible people 18 and up are expected to become available at the bases in early 2022. (Alexander Riedel/U.S. Air Force)

NAPLES, Italy — U.S. Army bases in Europe will defer most COVID-19 booster shots until early 2022 as the service instead prioritizes unvaccinated personnel and high-risk people.

In a statement Monday, Army health officials in Europe said booster shots will be given in the near term to seniors 65 and older, those at risk of serious illness and mission-essential workers. Immunizing unvaccinated service members and children is also part of the revised focus, the statement said.

Gino Mattorano, a spokesman for the Army’s Regional Health Command Europe, said that “very early in the new year,” all eligible people 18 and older are expected to be able to receive boosters at Army medical facilities.

The Army’s statement comes amid new federal guidelines announced Friday recommending COVID-19 booster shots for adults who were fully vaccinated with the Pfizer or Moderna shots at least six months ago.

While the Defense Department has mandated that military members and civilian workers must be fully vaccinated, booster shots remain optional.

Even so, demand for the shots appears to be high at some U.S. military hospitals in Europe, including those in Germany and Italy.

Americans can get a booster shot in parts of Germany without having to go through the military. Various German states are offering mobile COVID-19 immunization stations or reopening vaccination centers, and officials say Americans are welcome.

The U.S. naval hospital in Naples was accepting appointments Monday for people 18 and older who were fully immunized at least six months prior, but by mid-afternoon, available appointments were fully booked through Dec. 10.

Naples is offering all three vaccines for booster shots and had given about 650 jabs since Monday, said Lt. Cmdr. Megan Potter, a spokeswoman for U.S. Naval Hospital Naples, on Tuesday.

Potter said the hospital monitors the online appointment site daily and opens additional slots based on demand and clinic and staff availability.

“As COVID-19 boosters are provided in multi-dose vials, appointments are released in grouped sets to prevent and minimize vaccine wastage,” Potter said.

The hospital at Naval Air Station Sigonella in Sicily had Moderna and Johnson & Johnson boosters available by appointment only at its two clinics, according to the base web page.

However, service members assigned to the base’s flight line clinic could get the shot on a walk-in basis, the web page said.

Navy hospital spokespeople for Sigonella and Souda Bay in Crete were unable to respond Monday to requests for more information.

At Aviano Air Base in Italy, officials announced on Facebook that booster shots using only the Pfizer vaccine were available Monday for all adults at its walk-in clinic. Later in the day, they announced that the shots also would be available Tuesday and Wednesday.

All three vaccines will be available starting Nov. 29, and walk-in booster shot administration will be offered every Friday starting Dec. 3, the base clinic said Monday on Facebook.

"During the first few weeks, we do expect a large number of people to come in, so if you only recently became eligible, it may be best to give it a few weeks before coming,” Dr. Mark Lamson, medical director for allergy and immunizations at Aviano, said in a separate post Friday.

In preparation for booster availability, officials there were encouraging online sign-ups through the the Defense Health Agency portal, said Capt. Marie Ortiz, a U.S. Air Force spokeswoman at Lakenheath.

At Ramstein Air Base in Germany, medical officials were limiting booster shots.

Only service members 18 and up, Defense Department teachers, seniors 65 and older and people who live or work in high-risk settings and were fully immunized six months ago or longer were eligible, said Lt. Col. Will Powell, a spokesman for the 86th Airlift Wing.

Because of high demand, the base no longer will offer walk-in clinics for boosters. At one such clinic Friday, about 750 doses of both Moderna and Pfizer were administered, he said.

Booster shots will be given by appointment only to ensure priority for active-duty and essential personnel, he said, adding that an online appointment link will be posted to the base’s COVID-19 page as soon as it is available.