US, China issue joint pledge to slow climate change in the next decade 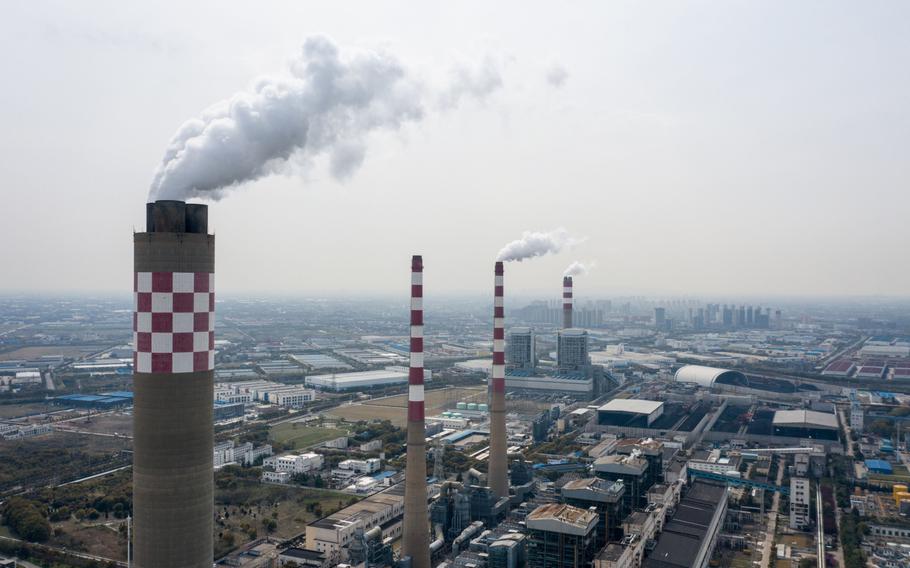 GLASGOW, Scotland — Jolting United Nations climate talks in their waning days, the United States and China issued a surprise announcement on Wednesday pledging the two countries would work together to slow warming during this decade and ensure that the Glasgow climate conference ends in success.

The declaration was short on concrete deadlines and commitments, and parts of it simply restated efforts that were already underway. But its timing and tone seemed intended to grease the Glasgow negotiations as they entered their crucial final stretch. Wednesday night was the first evening of negotiations that promised to drag into the late hours. And the pledge to work together on climate from the world's two biggest emitters — bitter rivals in so many other arenas — was a sign they wanted to carry the fractious talks to the finish line.

U.S. special climate envoy John F. Kerry called the declaration "a step we can build on in order to help close the gap" on emissions.

"The United States and China have no shortage of differences," he added. "But on climate, cooperation is the only way to get this job done."

Speaking just ahead of Kerry, China's special climate envoy Xie Zhenhua said the two countries would reiterate the importance of the Paris temperature goal of limiting warming to well below 2 degrees Celsius, with a goal of not exceeding 1.5 degrees.

With just a few days remaining to reach a COP26 agreement, he said the countries were focused on developing transparency regulations for reporting and tracking emissions and developing rules for a carbon market.

"Both sides recognize there is a gap between the current efforts and the Paris agreement goals," Xie said told reporters.

As the world's two superpowers, he continued, the U.S. and China have a special obligation to work together on keeping the world a peaceful place.

"We need to think big and be responsible," he said. "We need to actively address climate change and through cooperation bring more benefit to our two peoples and to people around the world."

Both envoys on Wednesday said the joint declaration was a product of nearly three dozen negotiating sessions, with diplomats from China and the U.S. meeting in person and virtually over the course of the year.

Pressed by reporters, Xie would not say whether China would accept the portion of the conference draft that says the world should accelerate reductions in coal use over the next decade.

China has 890 gigawatts of renewable power — 32% of the world total.

The surprise declaration was a boost to talks that are still teetering on the edge of failure to reach an agreement. Chinese President Xi Jinping declined to travel to Glasgow — a blow to ambitions to achieve a far-reaching deal to reduce greenhouse gases and avert disastrous levels of global warming, as China is the world's biggest emitter.

The two countries "declare their intention to work individually, jointly, and with other countries during this decisive decade," the statement said, "to strengthen and accelerate climate action and cooperation aimed at closing the gap."

In a tweet, U.N. secretary general Antonio Guterres said he "welcomed" the agreement.

"Tackling the climate crisis requires international cooperation and solidarity, and this is an important step in the right direction," he wrote.

Few details were immediately available about the implications of the declaration. For example, it did not identify an early date at which China's carbon emissions will peak. Currently the country has said it plans to start decreasing emissions by 2030, or earlier if it can.

Nor was it clear whether a promise to cooperate on renewable energy meant that the United States was considering lifting trade measures against Chinese-made solar panels and other green technology, a significant irritant in the relationship.

Kerry said there were many discussions about accelerating this transition. "We peaked on peaking," he said.

But, Kerry said, China did commit to rapidly develop a plan to reduce its methane emissions and to phase down coal "as fast as is achievable."

That commitment would not usher China into a joint U.S.-European effort to reduce methane emissions by nearly a third by 2030, but it was a first recognition from Beijing about the importance of methane in driving up warming.

This was China's biggest splash at a conference where it has not had a major presence over the past 10 days. Other high-emissions countries, such as India and Brazil, have had high-profile speaking engagements and can easily be spotted wandering national pavilions in the exhibition area of the conference. Chinese negotiators have been more active behind-the-scenes, policymakers said.

One European negotiator said that the significance of the U.S.-China accord was no guarantee that the broader talks in Glasgow would succeed.

"It doesn't mean they found a deal on all problems already," the negotiator said in a text message, speaking on condition of anonymity because the official was not authorized to speak publicly.

But the emphasis on action within the decade was significant, said Harjeet Singh, a senior adviser for Climate Action Network International.

The proceedings in Glasgow have been criticized for the number of long-term pledges not followed up by short-term commitments. An analysis published by U.N. researchers Tuesday found that "net zero" pledges pegged to the middle of the century would appear to limit warming to about 1.8 degrees Celsius, if achieved. But when only countries' official emissions-cutting pledges for 2030 were considered, the Earth looked on track to warm 2.5 degrees Celsius.