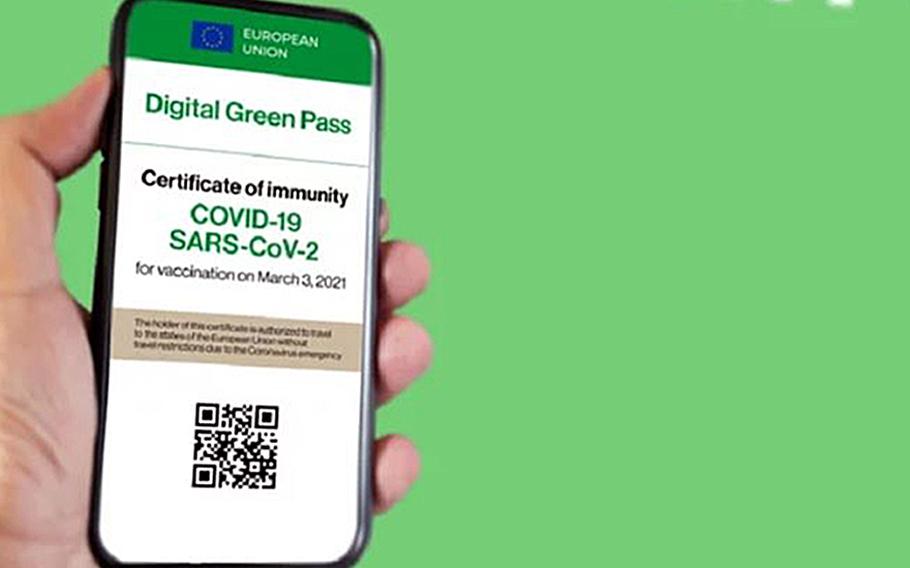 People assigned to U.S. military installations in Italy qualify for the Italian digital green pass, easing travel as well as entry to indoor restaurants, museums and other venues, according to officials at Naval Support Activity Naples and U.S. Army Garrison Italy. (suedtirol.info)

Active-duty service members, civilians and dependents assigned to U.S. bases in Italy who have been vaccinated now qualify for an Italian “green pass,” military officials have said.

Capt. James Stewart, the Naval Support Activity Naples commanding officer, made the announcement in an email this week.

“This is a voluntary process for those 12 and older but having a green pass will likely make travel within Europe easier and will make it easier to dine in restaurants, go to movies, shop in stores, etc.,” Stewart said in the Tuesday email, which went out to tenant command leaders. “This is currently the only process for Americans to get a green pass here in Italy.”

People who want to apply for the pass can go through their respective commands, Stewart’s email said. They will need to share with the Italian government their birthdate, the type of vaccine they received and other personal information. Submissions could begin as early as next week, the message said.

People will eventually receive a QR code allowing them to engage in activities that may not be accessible without the green pass under Italian law, Stewart said.

U.S. Army Garrison Italy made a similar announcement in a video posted Thursday to its Facebook page. Maj. Gen. Andrew Rohling, the senior Army officer in Vicenza, said U.S. military members and civilians would now qualify for a green pass.

“But I have to be honest. This is going to take some time,” Rohling said. “Italian officials are not yet sure how fast they can implement that green pass system across Italy.”

It wasn't clear from the video how the post will gather information from people who want a green pass or when it will begin accepting the information.

Italian authorities agreed to recognize the U.S. Centers for Disease Control and Prevention vaccination card as equivalent to the green pass. However, some Americans have said that businesses did not recognize their CDC cards and turned them away.

Green passes mostly have been used to ease travel between European Union and Schengen Zone countries.

Faced with a surge in COVID-19 cases fueled by the delta variant of the coronavirus, Italy passed restrictions in July requiring a green pass for entry into restaurants, pubs, gyms, sports arenas and other venues. The restrictions took effect Aug. 6.

The U.S. has several military installations across Italy, including Aviano Air Base and Naval Air Station Sigonella in Sicily.