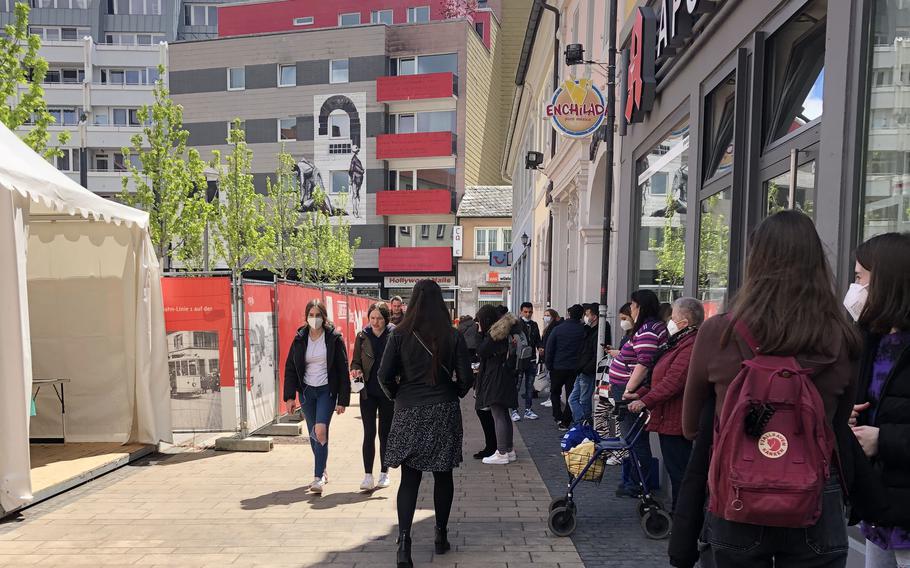 Buy Photo
People wait in line for a free coronavirus antigen test in Kaiserslautern, Germany, in May 2021. Although Germany will end free coronavirus testing for residents in October, the U.S. military in the country will continue offering coronavirus tests at no cost to eligible beneficiaries. (Karin Zeitvogel/Stars and Stripes)

“The not-so-good news is that the speed of vaccination has declined significantly,” Merkel said after a Tuesday meeting with the country’s 16 state governors, The Associated Press reported.

Beginning Aug. 23, a negative test, proof of recent recovery from coronavirus, or proof of vaccination will be required for access to indoor restaurants, hairdressers, hotels, hospitals, gyms and other facilities in Germany when average weekly new infections exceed 35 per 100,000 residents, according to regulations agreed to this week by the federal government. That requirement had previously been lifted in areas where weekly new cases averaged less than 50 per 100,000 inhabitants. 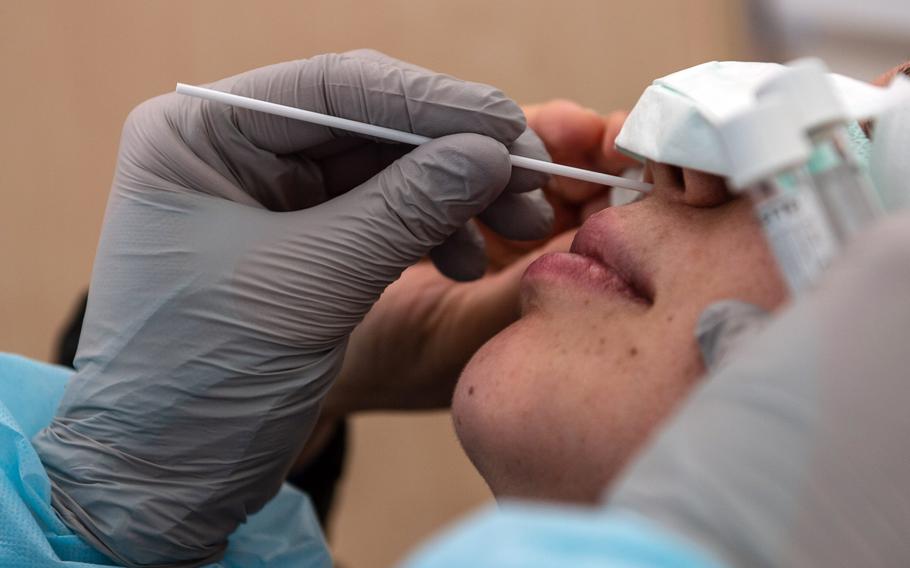 Buy Photo
A patient is tested for the coronavirus at the COVID-19 clinic at Landstuhl Regional Medical Center, Germany, in 2020. Although Germany will end free coronavirus testing for residents in October, the U.S. military in the country will continue offering coronavirus tests to eligible beneficiaries. (Brian Ferguson/Stars and Stripes)

Rapid antigen tests will continue to be free in Germany for people under 18, pregnant women and others who currently can’t be vaccinated for medical reasons, AP reported.

Army and Air Force clinics and hospitals, including Landstuhl Regional Medical Center, test military community members experiencing coronavirus symptoms, those who have been exposed to the virus and those traveling on official orders.

The tests are free for military members, civilians and their families, and that isn’t expected to change, Air Force and Army officials in Germany said Wednesday.

Local national employees may be tested for free under certain circumstances, such as for employment or on-the-job exposure, said Gino Mattorano, a spokesman for Regional Health Command Europe.

Ramstein has provided more than 6,000 self-test kits free to local nationals since early May, in accordance with German law, base officials said.

Military officials said they do not have the capacity to test people prior to unofficial travel, and they have directed Americans who needed a prior coronavirus test for that purpose, or for restaurant dining or shopping, to use antigen testing centers off base.

Free antigen testing centers are prevalent across much of Germany.

Antigen testing usually returns results in 15 minutes to an hour and is less expensive than molecular testing, which requires lab analysis. The German government has subsidized the cost of at least one antigen test per person, per week since March.

On Wednesday, Germany had a seven-day average incidence rate of 25.1 new infections per 100,000 residents, according to the Robert Koch Institute, the country’s disease control agency. Data showed the number of confirmed cases in Germany increased by 4,996 cases and 14 deaths since Tuesday. Germany’s rate is considerably lower than the United Kingdom, France and much of Western Europe.