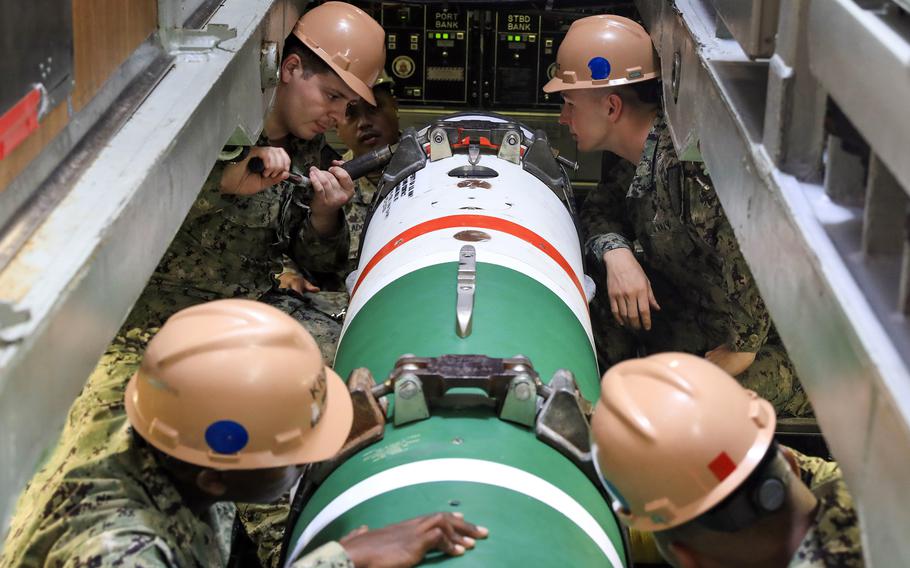 Sailors load a submarine-launched mobile mine aboard the USS Annapolis, May 4, 2022. (Zachary Grooman/U.S. Navy)

Canberra is accelerating plans to buy high-tech underwater weapons to protect ports, trade routes and communication lines from "potential aggressors," according to the Australian Defence Department.

The plans, reported Monday by national broadcaster ABC and the Reuters news agency, were confirmed by the department Tuesday in a statement to Stars and Stripes.

“A modern sea mining capability is a significant deterrent to potential aggressors,” the statement said.

Smart, modern sea mines are designed to discriminate between military targets and other types of shipping, according to the department.

“While mines might historically be associated with indiscriminate land mines or ground mines, these are a very different capability,” the statement said. “The Australian Government continues to work to deliver the advanced capabilities Australia needs quickly and effectively.”

The department did not provide further details but the Sydney Morning Herald newspaper, citing defense industry sources, reported Monday that Canberra would spend up to $698 million to buy "a substantial number" of sea mines from a European weapons supplier.

Australian Prime Minister Anthony Albanese would not "pre-empt those national security issues," he told ABC television for a Monday report.

Australia has laid the groundwork to boost its defenses in recent years. In 2021, the country joined the AUKUS defense pact with the U.S. and Britain and through it agreed to acquire nuclear submarines.

In March, leaders in Australia and New Zealand reacted with alarm after the Solomon Islands announced a security pact with China that many saw as a possible precursor to a Chinese military presence in the South Pacific.

China’s ties to the Solomons strengthened under the pact, which included training in China for island police and an agreement for Chinese police to deploy to the Solomons in an emergency, The Australian newspaper reported Nov. 11.

A Rand Corp. report released last month, China’s Global Basing Ambitions, rates Timor Leste, just north of Australia, as a highly desirable location for a Chinese base. Fiji and Papua New Guinea, also close to Australia, are rated as moderately desirable but all three countries have low feasibility ratings, according to the report.

Australian sea mines would raise the cost of Chinese power projection, Paul Buchanan, a U.S. security expert based in New Zealand, said in an email Tuesday.

“The potential of a [Chinese navy] base in the Solomons is also a consideration, as the mines can be used to blockade … forward port access there and elsewhere,” he said.

Maritime approaches to northern Australia through the Indonesian archipelago and passageways in the Western Pacific where Chinese warships might be deployed are places where Australian sea mines might be employed, according to Carlyle Thayer, an emeritus professor at the University of New South Wales and a lecturer at the Australian Defence Force Academy.

“In addition, smart sea mines could be deployed at Australia’s major ports to deter submarines and unmanned underwater vehicles,” he said in an email Monday.

Smart mines can be delivered by a variety of means, including by ship, submarine or by air. They can be placed on the ocean floor and activated and deactivated as the circumstances dictate,” Thayer said.

“Their placement poses huge risk for a would be aggressor transiting a strait where mines were laid,” he said.

“Advanced sea mines are a relatively cost-effective way of boosting Australian deterrence and complicating the planning and operations of any hostile power both within Australia’s immediate approaches and elsewhere throughout the Indo-Pacific as Australian and allied planning may require,” he said in an email Tuesday.