Prime Minister Fumio Kishida of Japan will meet with President Joe Biden at the White House on Jan. 13, according to a news release on the White House website Wednesday.

Biden looks forward to Kishida’s visit “to further deepen ties between our governments, economies, and our people,” according to the statement from White House press secretary Karine Jean-Pierre.

They will have much to talk about, including Japan’s plans to bolster its armaments with purchases of Tomahawk missiles from the United States, part of Japan’s record-breaking $51 billion military spending plan approved in December by the Cabinet; and the persistent presence by the navies of China and Russia in the seas around Japan, including the southward-stretching Nansei Island chain that includes Okinawa.

“They will also discuss a range of regional and global issues including [North Korea’s] unlawful weapons of mass destruction and ballistic missile programs, Russia’s brutal war against Ukraine, and maintaining peace and stability across the Taiwan Strait,” Jean-Pierre said in the statement.

North Korea’s drumbeat of ballistic missile tests in 2022 included an intermediate-range weapon that arced over northern Japan, prompting “take cover” warnings in parts of the island nation before it splashed into the Pacific Ocean.

The two allied leaders crossed paths regularly throughout 2022. It will be their first meeting since mid-November at the G-20 Summit in Bali, Indonesia. They also met informally Nov. 2 at the COP26 conference on climate change in Glasgow, Scotland, and Sept. 12 on the sidelines at the U.N. General Assembly in New York, according to media reports and Japan’s Foreign Ministry.

Biden traveled to Japan in May and met for more than two hours with Kishida in Tokyo.

“President Biden will reiterate his full support for Japan’s recently released National Security Strategy, its presidency of the G7, and its term as a non-permanent member of the United Nations Security Council,” the statement said. 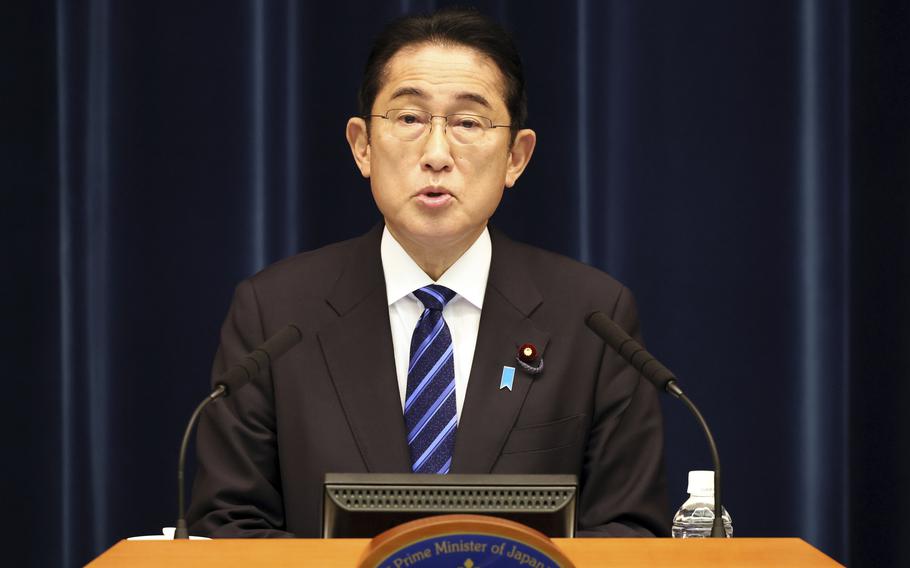