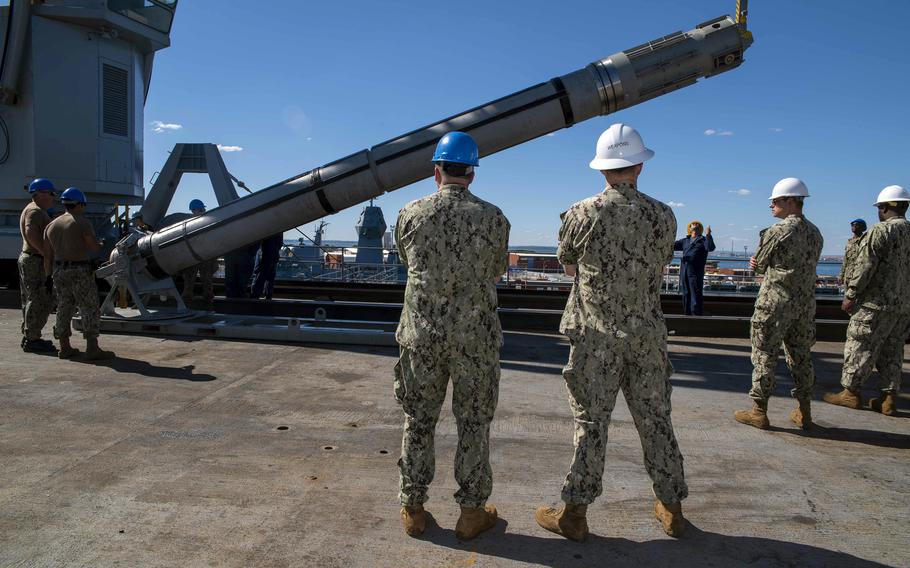 Japan is considering new defensive measures that may include purchasing Tomahawk missiles, seen here being offloaded from the USS Frank Cable on April 24, 2022. (Charlotte Oliver/U.S. Navy)

TOKYO – Citing concern over its challengers’ growing military might, Japan’s Cabinet on Friday approved the nation’s largest-ever defense budget for next fiscal year, a drastic increase over this year’s budget.

This is the 11th consecutive increase in defense spending for Japan, according to the budget document released by the Ministry of Defense. It is also the first defense budget composed after three significant policy statements were adopted Dec. 16: National Security Strategy, National Defense Strategy and Defense Buildup Program.

The revised policies state that Japan’s defense spending should be increased to “fundamentally enhance defense capability in the next five years” as Japan faces increasing security threats in the region and adopts new ways of fighting.

Starting next year, Japan plans to increase its defense spending to a total of 43 trillion yen, or about $324.2 billion, over the next five years. That sum is about 1.6 times current five-year total spending, according to the Defense Buildup Plan.

The increase is necessary, the budget states, to cope with new threats surrounding Japan, such as China’s attempt to unilaterally change the regional balance of power by force, North Korea’s record-breaking run of missile tests this year and Russia’s invasion of Ukraine, along with its increasingly frequent military activities in the Far East.

Next year’s budget follows the Defense Buildup Program, which aims to fundamentally strengthen Japan’s multi-domain defense force, which includes space, cyber and the electromagnetic spectrum, according to the budget.

The approved budget includes funds for stand-off defense, such as 211.3 billion yen, or $1.59 billion, to acquire Tomahawk missiles; and 127.7 billion yen, or about $963 million for development and mass production of improved surface-to-ship guided missiles.

The budget allocates 828.3 billion yen, or about $6.24 billion, more than three times the previous year’s budget, to acquire ammunition for continuous unit operations, it stated.

It also allocated 896.8 billion yen or about $6.76 billion, again more than three times the previous year’s budget, for research and development, such as development of next generation fighter jets and research for stand-off defense capabilities.

Japan’s drastic defense policy review and increased spending comes as neighboring countries in the region have strengthened their military powers.

North Korea in October launched an intercontinental ballistic missile over Japan for the first time in five years. China and Russia are sending military aircraft and vessels into the airspace and waters surrounding Japan. The two started a weeklong joint naval exercise Thursday in the South China Sea, for example.

During a meeting with President Joe Biden in May, Japanese Prime Minister Fumio Kishida committed to fundamentally strengthening the nation’s defense and increasing its defense budget.

Although Japan has gradually increased its defense spending in recent years, it had the lowest ratio of defense expenditures to GDP among its G-7 partners the United States, Canada, France, Germany and Italy, as well as Australia and South Korea.