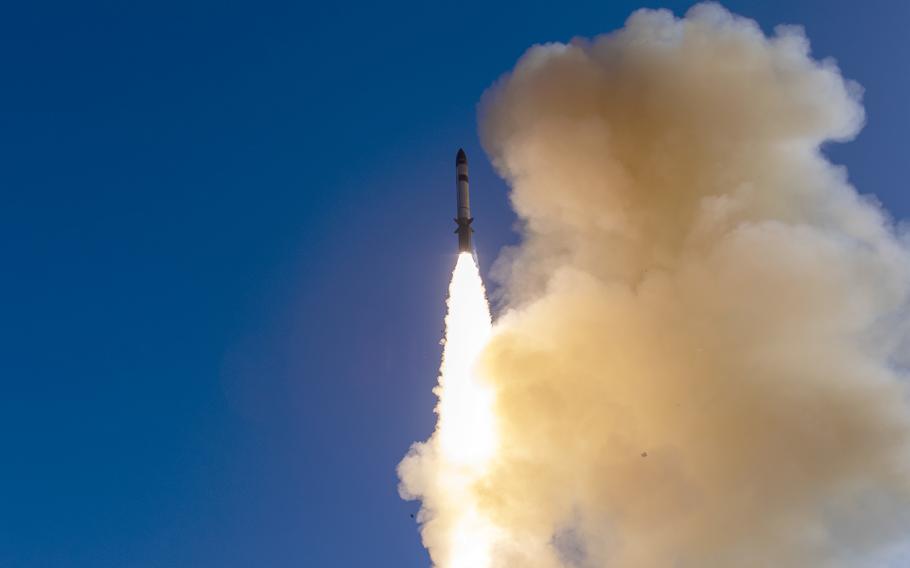 New Japanese and U.S. missiles have the potential to overwhelm China’s powerful and rapidly growing navy in a conflict, according to a U.S. security expert.

Although China has grown its navy to more than 350 vessels and continues to build more, the two allies can produce many more missiles to strike at them, retired Marine Col. Grant Newsham, a senior researcher with the Japan Forum for Strategic Studies in Tokyo, said in an email Thursday.

“The Chinese positively churn out ships these days, but it’s a lot easier to make a missile than a ship, and you can make (or buy) a lot more of them,” he said. “China might run out of ships before Japan (and the US) run out of missiles.”

A defense budget for the coming fiscal year totaling 6.82 trillion yen, or $51.4 billion, the nation’s largest ever, was approved Friday by Japan’s Cabinet. It includes 211.3 billion yen, or $1.59 billion, to acquire U.S. Tomahawk missiles and 127.7 billion yen, about $963 million, to develop and manufacture improved surface-to-ship guided missiles.

Japan is developing a stand-off missile unit capable of long-distance strikes, a spokesman for the Ministry of Defense said in an email Tuesday. As part of a recently unveiled national defense strategy, the ministry is emphasizing standoff defense capabilities, particularly a strengthened air and missile defense.

Units of Japan’s Self-Defense Forces will field the made-in-Japan Type 12 surface-to-ship missiles now under development that can launch from the ground, air and sea. Units will also deploy U.S.-made Tomahawk missiles and new, hypersonic guided missiles, the spokesman said.

“We believe it is necessary to strengthen standoff defense capability… to effectively prevent invading forces,” the ministry spokesman told Stars and Stripes. Some Japanese government officials are required to speak to the media only on condition of anonymity.

The new missile force could sink any enemy ship within 500 to 700 miles of Japanese territory, Newsham said.

“You can make it a very long afternoon for Chinese or Russian ships trying to cross through the Nansei,” the southern island chain that includes Okinawa, he said, “or even up north of Hokkaido.”

Japan is working to extend the range of Type 12 missiles from slightly over 60 miles to about 600 miles, putting North Korea and China’s coast within range, according to an Aug. 21 Yomiuri newspaper report.

The Tomahawk is “a precision weapon that launches from ships and submarines and can strike targets precisely from 1,000 miles away, even in heavily defended airspace,” manufacturer Raytheon states on its website.

A pair of Japanese destroyers shot down targets with the Standard Missile 3 Block IIA, commonly called the SM-3, at a missile range off Hawaii last month, the U.S. Missile Defense Agency said Nov. 21.

The tests demonstrated the capability of the new SM-3 Block IIA missiles, which operate as part of the Aegis missile-defense system, to defeat medium- and intermediate-range ballistic missiles, according to the agency statement.

The exercise proved that SM-3 surface-to-air missiles are capable of a long-distance strike from Japan’s Aegis-equipped destroyers, Riki Ellison, founder of the Missile Defense Advocacy Alliance, said in an email Nov. 28.

Japan will also likely employ SM-6 missiles launched from trucks, which the U.S. Army does already, Ellison said in an email Thursday.

Manufacturer Raytheon touts the SM-6 on its website as “the only weapon that can perform anti-air warfare, ballistic missile defense and anti-surface warfare missions.”

The number of personnel assigned to operate Japan’s new standoff missiles, where they will be based and the timeline for deploying the weapons is undecided, the Defense Ministry spokesman said.

However, Japan plans to deploy the first of them in fiscal year 2027, he said.

A challenge for Japan will be recruiting personnel to operate the missiles but there has been a psychological shift away from pacifism in the country, Newsham said. The Japanese public supports the move and more defense spending, he said.

Japan’s government on Friday announced that it will spend around $324 billion on defense over the next five years. By fiscal 2027, Japan’s defense spending will represent 2% of its gross domestic product, double its what it spends now.

“Long range missiles are for one purpose only...and that’s to kill people and destroy things,” Newsham said. “The people and things don’t even have to get all that close to you. And you can reach them a thousand miles away (in the enemy’s country) if you’ve got the right kind of missiles -- and the targeting systems and the like.”