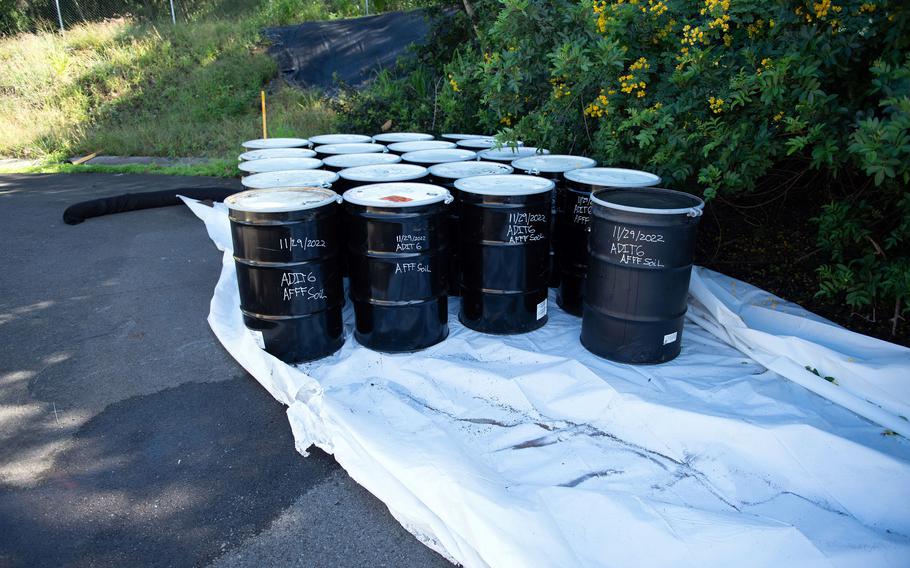 JOINT BASE PEARL HARBOR-HICKAM, Hawaii — The hundreds of gallons of toxic firefighting foam spilled Tuesday in the Red Hill fuel storage facility in Hawaii is a “setback” in draining its tanks, the rear admiral in charge of that job said Wednesday.

About 1,100 gallons of Aqueous Film Forming Foam, or AFFF, was released from a tank near the top level of the vast underground facility.

Workers toiled through the night digging up soil contaminated with the foam, which contains PFAS, or perfluoroalkyl and polyfluoroalkyl, a class of hazardous chemicals commonly used in manufacturing and fire suppressants.

The Navy is in the midst of a two-year project to drain roughly 104 million gallons of fuel from the tanks before the facility is permanently closed. One year ago, a fuel leak from the facility contaminated drinking water for thousands of residents on and near Joint Base Pearl Harbor-Hickam.

“This is a setback, but the bigger picture here is that we've got to remove this fuel from the tanks above our aquifer,” Rear Adm. John Wade told reporters during a news conference Wednesday at the joint base. “That is the threat.”

“The Department of Defense is taking this inadvertent release of AFFF extremely seriously,” Wade said.

Up to 50 workers at a time labored through the night to remove soil soaked with AFFF, as well as tearing up asphalt and concrete that may have absorbed the foam, Rear Adm. Stephen Barnett, commander of Navy Region Hawaii, said at the news conference.

About 250 cubic feet of soil was put into 131 drums and removed as of Wednesday afternoon, Barnett said. 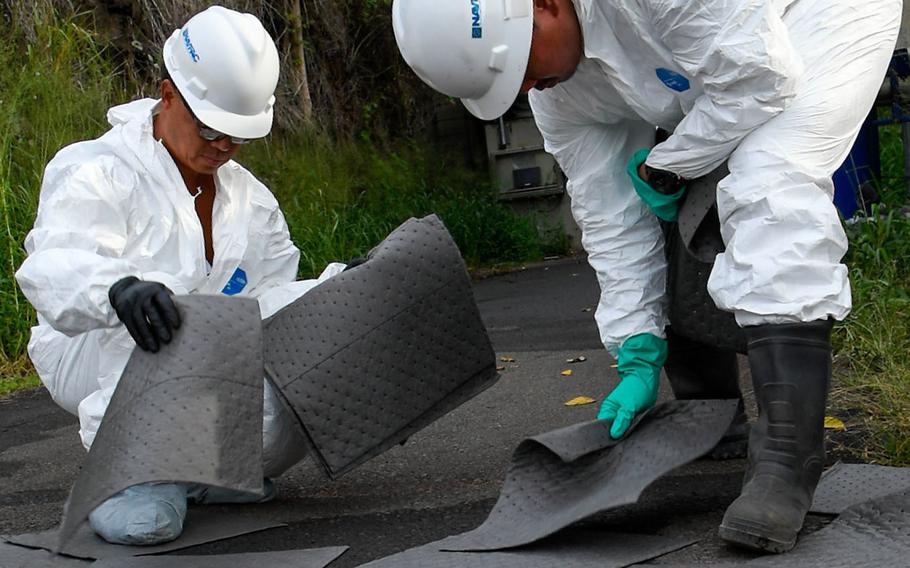 Navy contractors place absorbent mats at the site of a spill of toxic firefighting foam at the Red Hill underground fuel storage facility on the outskirts of Honolulu, Hawaii, Tuesday, Nov. 29, 2022. (U.S. Navy)

The Hawaii Department of Health said in a news release Wednesday that it had notified the Navy it would require the service to test for PFAS in the soil and groundwater. It is also requiring the Navy to contact the manufacturer of the foam to identify specific PFAS components in the AFFF.

“There continues to be no evidence of impact to surface water or drinking water,” the Health Department said.

Ernest Lau, manager and chief engineer at Oahu’s Board of Water Supply, expressed exasperation with the Navy during a news conference Wednesday, at one point struggling to hold back tears.

“I demand of the Navy – you’ve got to move faster,” Lau said. “The AFFF systems only exist because there’s still petroleum stored there at Red Hill. Remove the petroleum and there’s no need for AFFF there or any other dangerous chemicals that might be stored at Red Hill.”

Those infrared sensors can activate pumps to apply foam where a heat anomaly has been sensed, he said.

The cause of the spill, however, is still under investigation.

The facility had only one holding tank for the AFFF, which is now empty, Wade said. Left with diminished capacity to suppress a fire, the facility has stationed a firetruck onsite round-the-clock, he added.

The Navy is working on other fire “risk mitigations,” Wade said.

All maintenance in the facility is now on hold as a result, he said.

“Because we just want to understand what the risk is,” he said. “And I want to be able to get to a point where we have adequate fire protection so that we can continue all the repairs, modifications and enhancements that are required per this [Health Department closure order] so that we can move forward and keep to our defueling timeline,” Wade said.

The timeline calls for completion of emptying the tanks by summer 2024, with full closure by 2027.