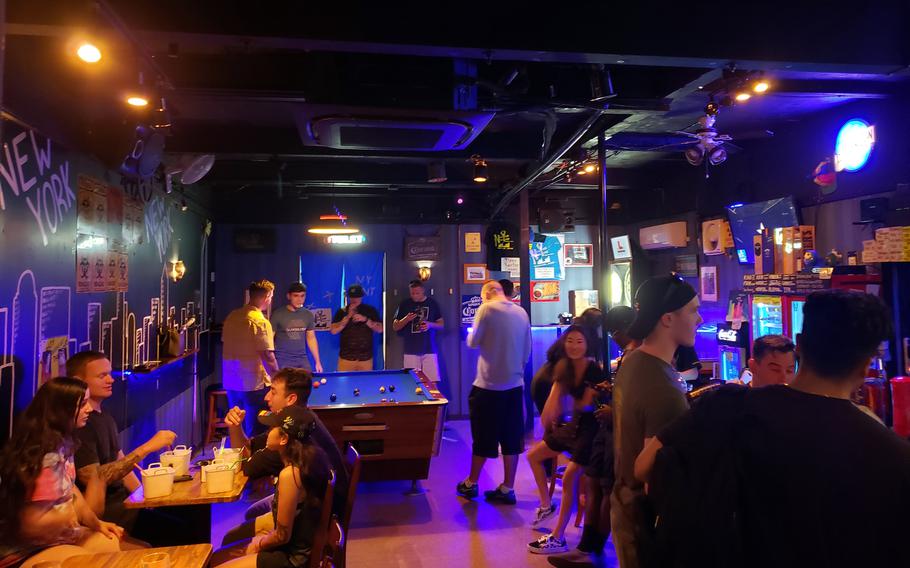 Sailors and locals party in summer 2021 in the Honcho district near Yokosuka Naval Base, Japan. (Alex Wilson/Stars and Stripes)

Liberty policies for U.S. service members in Japan ages 20 and older are about to become a little more generous, according to changes announced Thursday by U.S. Forces Japan.

New policies that take effect Monday will permit individual commands to shift their curfews from rank-based to age-based, USFJ spokesman Maj. Thomas Barger told Stars and Stripes by email Thursday. The standard 1 a.m. to 5 a.m. curfew in place since March 2020 that applies to enlisted service members of E-5 and below will apply instead to members ages 19 and younger, he said.

Eligible service members may have another drink in that extra hour. The changes move the deadline for consuming alcohol off-base from midnight to 1 a.m., according to Barger.

Service members in Japan are currently prohibited from consuming alcohol anywhere but their residence, hotel or other quarters between midnight and 5 a.m. The same conditions will apply under the 1 a.m. deadline.

“The current update is part of leadership’s ongoing review of the order’s necessity and provisions therein to allow for more individuals to experience the local communities they work and live in while maintaining relevant liberty safeguards,” he wrote in the email.

“This update better serves our military personnel while recognizing a shift in demographics to older, more mature, junior enlisted members now serving in the U.S. military,” Barger said. “Japanese society traditionally recognizes those 20 years and older as adults, therefore bringing the USFJ policy in line with local culture and norms.”

A third change eliminates the requirement for a “liberty buddy” for some service members. Under that system, military personnel below E-5 were required to be accompanied on liberty by another approved individual, such as another service member or a family member, between 10 p.m. and 5 a.m.

The new policy does away with the buddy requirement entirely, a decision influenced by the military’s built-in culture of camaraderie, Barger said.

“A buddy/wingman concept is engrained in our military culture, therefore administratively mandating a nationwide policy was deemed not relevant nor necessary to maintain military readiness,” he wrote in the email. “We always have and will continue encouraging our personnel to look out for each other.”