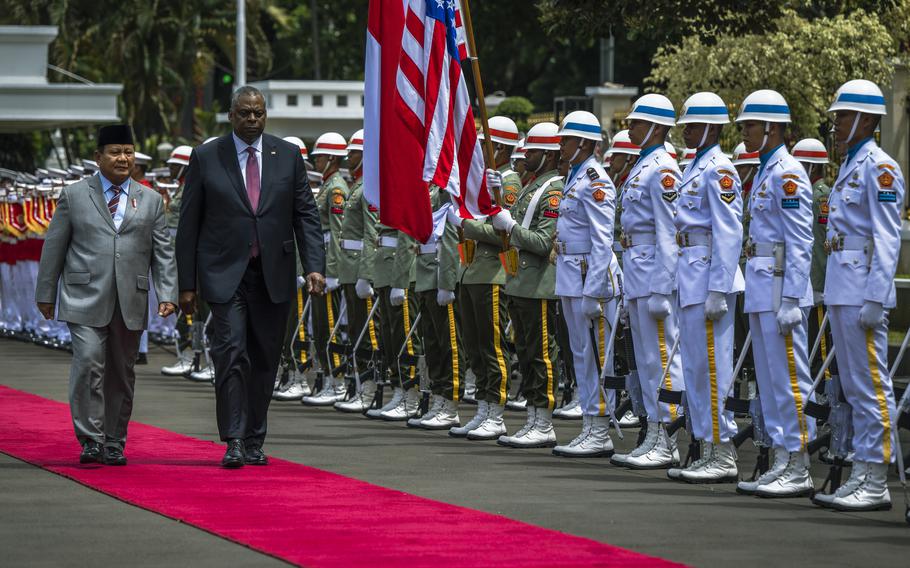 Defense Secretary Lloyd Austin met with Indonesia’s military chief on Monday in Jakarta, where he thanked the country for its support for Ukraine and promised to increase military engagements to ensure a free and open Indo-Pacific.

Austin traveled to Indonesia as part of a week-long foreign trip that took him to Canada late last week, and to Cambodia for a ministerial security summit later this week.

In Jakarta, Austin met with Indonesia Defense Minister Prabowo Subianto, the Pentagon said in a summary of the visit.

The two discussed greater security cooperation in the Indo-Pacific, which has become a region of increased significance in recent years — mainly due to rising Chinese influence.

“The United States has always been a good friend to us in our times of needs,” the Indonesian defense minister said. “We thank the United States government for the great assistance given to us during the [COVID-19] pandemic.”

Austin said at a joint news conference that Indonesia is considering a deal to buy F-15 fighter jets from Boeing and that the U.S. and Indonesian militaries will increase defense training and exercises in the future.

“We’re continuing to expand the scope and complexity of our engagements,” he said. “Earlier this year, Indonesia hosted a super [exercise] Garuda Shield, with more than 4,000 combined forces from 14 countries … making it one of the largest multinational exercises in the region.

“U.S. friendship with Indonesia stretches back more than 70 years. And the scope and scale of our defense cooperation only continues to grow, spurred both by our converging security interests and by our commitment to shared principles.”

Austin also thanked Subianto for Indonesia’s vote in the United Nations that condemned Russia for its invasion of Ukraine. 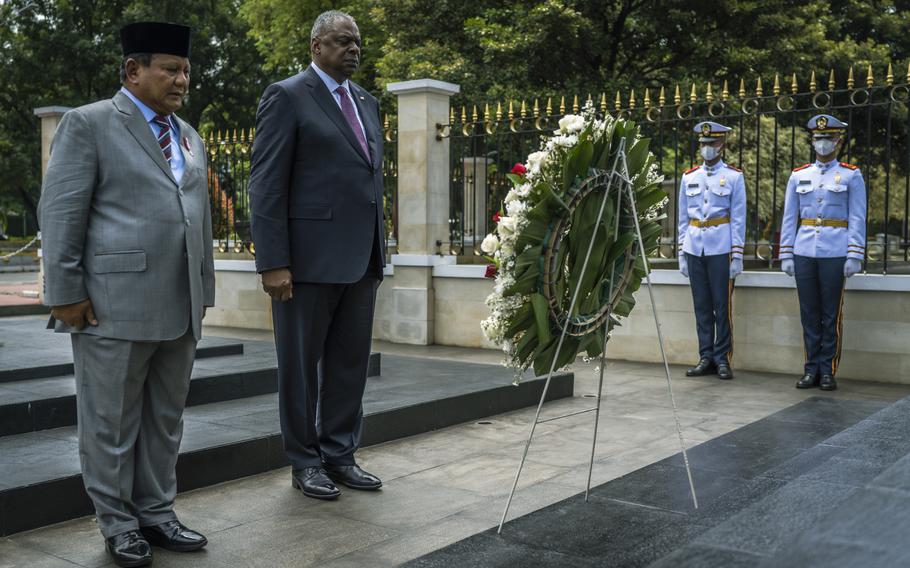 During the visit in Jakarta, Austin and Subianto participated in a wreath-laying ceremony to honor fallen soldiers — and Subianto said he supports U.S. efforts to recover remains of dead American troops that are still in Indonesian territory from past conflicts.

“We promise to expedite this to conclude with all of the relevant requirements, and we will support this because this is, I think, very honorable and it is a sacred duty with any country to bring back their fallen heroes,” Subianto said.

Austin also met with the commander of the Indonesian national armed forces during Monday’s visit.

The Defense Department said the main purpose of Austin’s visit to Indonesia was to “drive progress on key bilateral initiatives to support interoperability, capability development and modernization of the Indonesian armed forces.”

After leaving Indonesia, Austin traveled to Seam Reap, Cambodia, and will attend the 9th ASEAN Defense Ministers’ Meeting-Plus there Wednesday. The summit always involves the U.S. defense secretary, but this year will be Austin’s first time attending in person. He attended last year’s summit remotely because of COVID-19.

The Pentagon said the visit to Cambodia aims to reinforce U.S. support for allies and ensure “greater stability, transparency and openness” in the Indo-Pacific region, which has seen heightened tensions in recent months and years — mostly from China and North Korea.

Austin traveled to the Indo-Pacific for his first overseas trip as defense secretary in May 2021. At the time, he visited South Korea, Japan and India. Monday was the fourth time he met bilaterally with Subianto as U.S. defense secretary. He is expected to return to the United States this week.

The Defense Department’s National Defense Strategy, released last month, identified China as the top U.S. competitor and noted an array of concerns about Beijing’s influence in the Indo-Pacific, particularly as it relates to Taiwan. China claims sovereignty over Taiwan and considers the island to be a breakaway territory.

Some U.S. defense and intelligence officials have expressed concern that Russia’s war in Ukraine could persuade China to attempt an invasion of Taiwan. President Joe Biden said in September that the U.S. would defend Taiwan militarily if such an incursion occurred.