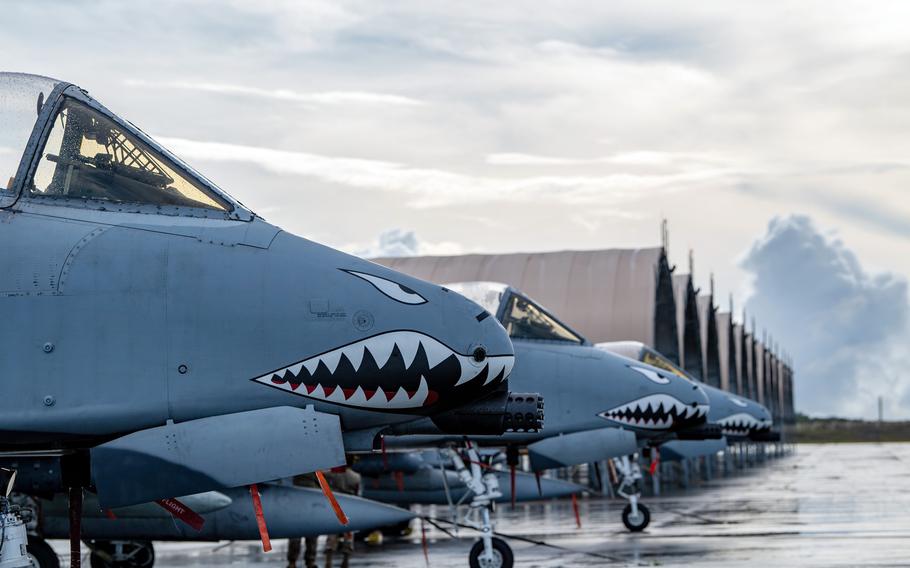 U.S. Air Force A-10 Thunderbolts arrived on Guam last week for a dynamic force employment operation that aims to foster unpredictability in overseas deployments, the service said in a news release Wednesday.

“The United States is committed to being ready to execute missions quickly in unpredictable ways and rapidly respond to adversary moves within and across theaters of operation,” the release said.

The Air Force did not disclose the exact number of A-10s deployed to Guam. A photo posted on Andersen’s Facebook page showed four of the aircraft — complete with their hallmark paintings of jagged teeth on their nose cones — lined up at the base.

Dynamic force employment “is designed as a way for Pacific Air Forces to exercise their ability to generate combat air power from dynamic force elements while continuing to move, maneuver, and sustain these elements in geographically-separated and contested environments,” the Facebook post states.

The A-10, nicknamed “Warthog” for its aggressive maneuverability and those teeth, are designed for close air support of ground forces. It is highly effective against tanks and other armored vehicles and can operate at low speeds and altitude. The aircraft arrived about a week after the Air Force deployed an undisclosed number of B-1B bombers from South Dakota to Guam for a bomber task force mission.

The American territory of Guam is of growing importance to America’s defense, according to the updated National Defense Strategy publicly released last week.

“Guam is home to key regional power projection platforms and logistical nodes and is an essential operation base for U.S. efforts to maintain a free and open Indo-Pacific region,” the document states.

“Within the context of homeland defense, an attack on Guam or any other U.S. territory by any adversary will be considered a direct attack on the Unite States, and will be met with an appropriate response,” the document states.

A $1 billion effort to establish a comprehensive, integrated missile defense system for Guam is underway, an endeavor some lawmakers regard as urgent given North Korea’s stepped-up missile testing and China’s military ambitions in the region.