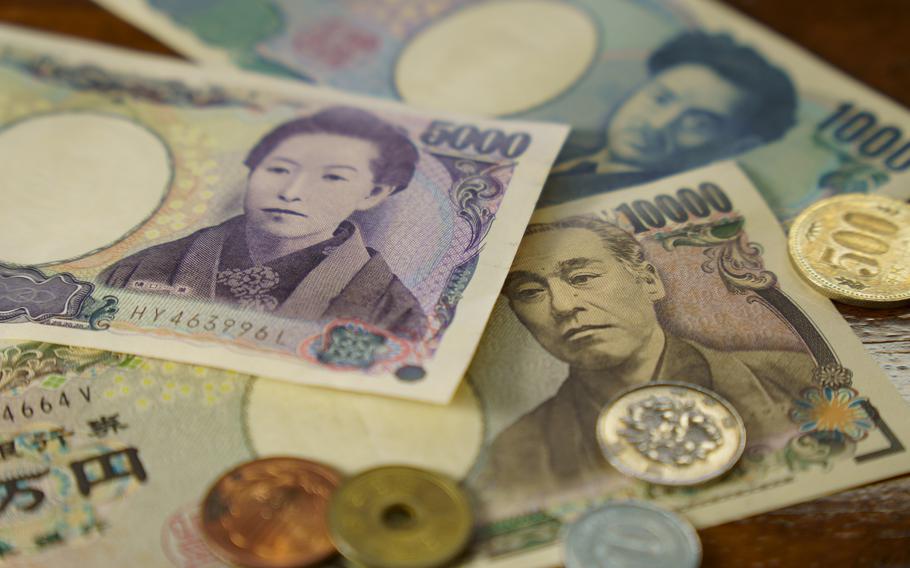 The yen has dropped 23% against the dollar this year as Japan continues to keep interest rates near zero. (Akifumi Ishikawa/Stars and Stripes)

YOKOTA AIR BASE, Japan — Japan’s plunging currency is softening the impact of inflation on American military personnel stationed in the country, even as the government cuts their allowances.

A dollar bought just over 149 yen on Monday for the first time in 32 years and was hovering around that level Tuesday evening. The yen has dropped 23% against the dollar this year as Japan continues to keep interest rates near zero.

In contrast, the U.S. Federal Reserve has raised its benchmark interest rate at each of its past three meetings, most recently in September, bringing the rate to between 3% and 3.25%, the Wall Street Journal reported Thursday.

A higher interest rate is expected to slow inflation, but by promising higher yields it also attracts investment to the United States, which strengthens the dollar compared to other nations’ currencies.

The strong dollar is welcomed by U.S. service members in Japan, most of whom have hundreds of dollars less to spend each pay period due to cuts in their cost-of-living allowance this month.

Most are no longer receiving COLA — tax-free money to help offset the costs of living in expensive areas overseas — following changes announced by the State Department on Oct. 1.

The dollar’s rise comes also as prices increase across Japan due to the weak yen and increased costs for energy, packaging and logistics. Public broadcaster NHK reported Oct. 9 that prices of 20,665 items have or will be raised this year by an average of 14%.

“This is the best time to go to restaurants or go out because the yen is a really good value right now,” Air Force spouse Mel Reyes, 36, of Cebu, Philippines, told Stars and Stripes on Tuesday.

Her family, who lives on Yokota, took advantage of the exchange rate with a trip to Tokyo DisneySea last month. There are some good deals in local stores on items such as groceries and skin care products, she said while eating lunch at Yokota’s food court.

The dollar’s strength against the Philippine peso (a dollar bought 58.89 pesos on Tuesday) is also helping with money Reyes sends to family back home, she said.

However, Air Force Master Sgt. Jose Punzo, 30 of Los Angeles, who works at Yokota’s post office, said he thinks inflation is canceling out the savings gained through the exchange rate.

The costs of parking and things such as apples have gone up off base, he said.

“If the yen is going down that means prices are going to go up off base,” said Punzo, also at the food court on Tuesday. “We don’t feel it as much as the locals.”