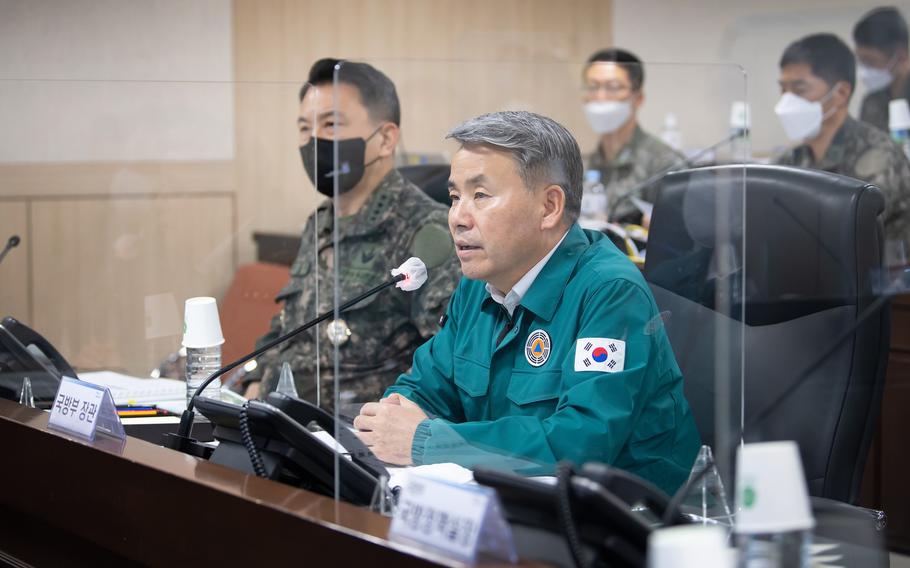 SEOUL, South Korea — South Korea’s defense minister on Wednesday promised “infinite” benefits for North Korea if it sheds its nuclear weapons, but “overwhelming costs” if it continues to develop them.

“North Korea continues to advance its nuclear and missile capabilities, now directly threatening the security of not only the Korean Peninsula but also the entire world,” Lee said to an audience of military officials and diplomats from over 50 countries. The annual defense expo is sponsored by the ministry.

North Korea has conducted an unprecedented 18 rounds of missile tests so far this year and has prepared to hold its seventh nuclear test, its first since 2017, according to U.S. and South Korean officials.

Lee in August said South Korea’s response to another test by the North would be “entirely different” compared to previous episodes.

In Tokyo on Wednesday, diplomats from the United States, South Korean and Japan met to discuss the anticipated nuclear test. The three countries will discuss ways to cooperate in the event of a test and the communist regime is still invited to negotiations without preconditions, State Department spokesman Vedant Patel said at a press briefing in Washington the same day.

In his speech at the defense dialogue, Lee said South Korea’s military is preparing to respond to nuclear and missile threats from the North by improving its missile defense system and staying in close communication with allies like the U.S.

“I ask for your continued cooperation with the international community so that North Korea can realize that the new route of denuclearization will present infinite benefits, whereas the conventional route of nuclear and missile development will only present overwhelming costs,” Lee told the audience.

North Korea has so far rejected the South’s offer. Kim Yo Jong, a senior party official and North Korean leader Kim Jong Un’s sister, described Yoon’s proposal as “ridiculous” and criticized him for suggesting the communist regime needed help with its infrastructure problems, according to the state-run Korean Central News Agency.