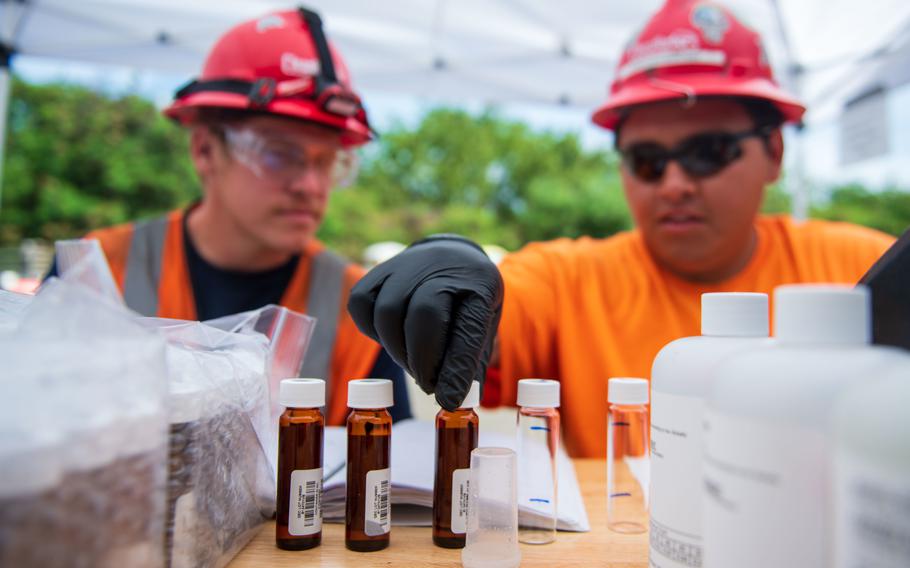 Navy contractors process water samples on March 17, 2022, as a part of monitoring at the Red Hill well in Aiea, Hawaii. (Mar’Queon A. D. Tramble/U.S. Navy)

The lawsuit, filed in U.S. District Court of Hawaii, alleges the U.S. Navy “made negligent errors” when it spilled jet fuel at the Red Hill Bulk Fuel Storage Facility in May and November 2021.

The suit does not specify the amount of compensation sought, but it states the plaintiffs’ injuries include past and future pain and suffering, mental anguish, medical care, loss of income and physical impairment.

“While the government failed to disclose the contamination as required by federal law, these families continued to ingest and immerse themselves in the toxic water,” the lawsuit states.

Just Well Law, the Austin, Texas-based firm bringing the suit, said in a news release Wednesday that it represents “hundreds more” clients who have filed pre-litigation forms with the Navy and will be added to the lawsuit.

The jet fuel contaminated one of three wells used by the Navy for its water distribution system supplying military communities on and near Joint Base Pearl Harbor-Hickam.

Roughly 3,200 families were temporarily relocated to hotels on Waikiki Beach for months beginning in December as the Navy worked at isolating the contamination and flushing the entire system.

The lawsuit, however, asserts that the Navy’s “actual efforts to remediate the water situation only compounded the harm.”

“The Navy’s initial flushing program asked residents to run their water, and flush toilets and other devices to remove contaminants,” the lawsuit states. “Some residents reported that chemical fumes became overwhelming when they started flushing.”

The plaintiffs allege that the flushing exacerbated symptoms they were already experiencing from the contamination, the lawsuit states.

The Navy said in a statement Wednesday that it does not comment on ongoing litigation.

“The Navy’s priorities are to ensure the safety and health of our people, their families, and the community members impacted by the Red Hill fuel spill, provide responses to their concerns, and ensure access to clean drinking water,” the Navy statement said.

A Navy investigation made public in June concluded that among the contributing factors leading to the contamination were “a culture of procedural non-compliance; material deficiencies; poor training and supervision; ineffective command and control; absence of ownership regarding operational safety; unacceptable immediate response actions, including a lack of timely, accurate and thorough reporting; and a fundamentally flawed investigative process concerning” the first of the two spills in 2021.

All have relocated away from Hawaii.

Wyatt lived in the military housing community of Earhart Village with her daughter and husband, an active-duty Air Force technical sergeant.

In the wake of the well contamination last fall, Wyatt “experienced migraines with visual auras, diarrhea, swelling in her right kidney that sent her to the emergency room, rashes that covered her face, abdominal pain, and a laparoscopic surgery where her doctor discovered endometriosis on her ovaries,” the lawsuit states.

Her daughter suffered from “abdominal pain, nausea, vomiting, diarrhea, headaches, irritation of the skin and eyes, mouth sores, heart palpitations, bladder incontinence, and substantial hair loss, all before the age of four,” the lawsuit states.

Wyatt’s request for toxicology and blood testing from the military health care system was denied, the lawsuit states.

Feindt, a former professional golfer, has undergone five medical procedures related to pain that radiates up and down his abdomen, the lawsuit states.

Freeman “spent her family savings to get off the island but still experiences multiple seizures a day,” the lawsuit states.

Simic and her family “have been in and out of the hospital multiple times since leaving the island in March,” the lawsuit states. “She has been to the emergency room over five times and hospitalized twice.”