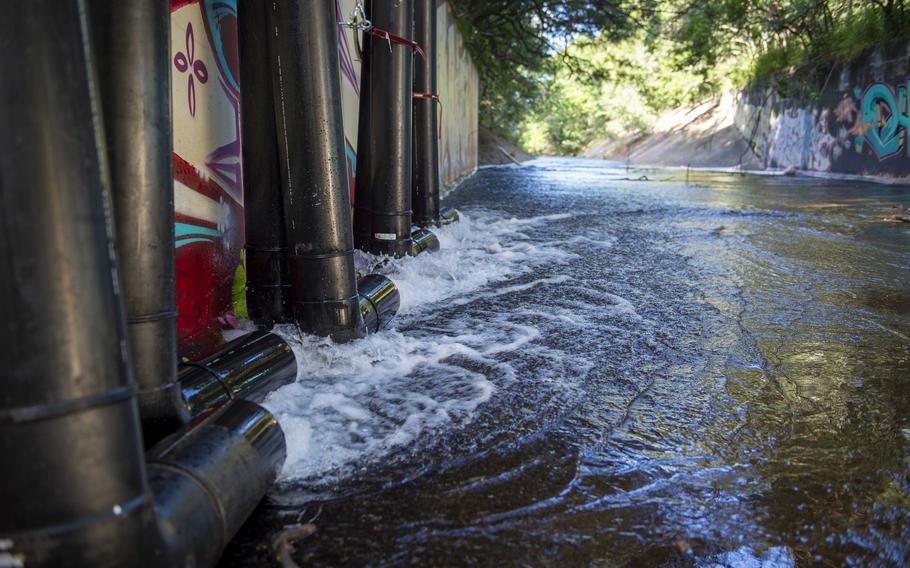 Water pumped from the Red Hill well in Aiea, Hawaii, and purified through carbon filters, is discharged into the Halawa Stream on Jan. 30, 2022. (Luke McCall/U.S. Army)

FORT SHAFTER, Hawaii — The Navy has pledged to contribute $14.9 million to help foster protection of the groundwater aquifer that serves Joint Base Pearl Harbor-Hickam and much of greater Honolulu in response to a disastrous jet fuel leak last year.

The Navy’s cooperative agreement with the state of Hawaii would provide funding through the Department of Defense Readiness and Environmental Protection Integration Program Challenge, the service said in a news release Thursday.

The move is an effort by the Navy to regain public trust after jet fuel from its Red Hill underground fuel storage tank leaked late last year into a well that supplied water to thousands of residents in military housing communities on and near the joint base.

The state and Defense Department have ordered the storage facility to be emptied and permanently shut down. One of the three wells used by the Navy for its water distribution system remains contaminated.

A Navy investigation made public in July catalogued a host of deficiencies by the service that led to the groundwater contamination, including poor training, a culture of not complying with procedures and slow response times.

Some island residents are no longer willing to give the Navy the benefit of the doubt when it comes to the water issue and fear the full extent of the contamination is not yet known.

Hawaii’s Board of Water Supply said in an Aug. 4 news release it had detected low-level petroleum contamination in a monitoring well about 1,500 feet southeast of the Red Hill facility.

The detection of chemicals associated with hydrocarbons “significantly heightens the [Board of Water Supply’s] concern that fuel contamination from the Red Hill facility is travelling through O‘ahu’s sole-source aquifer,” Ernest Lau, the board’s manager and chief engineer, said in the news release.

The new Navy funding is intended to “implement landscape-scale watershed protection, restore native forests to replenish the Pearl Harbor Aquifer, and provide long-term protection in the Koolau Mountains,” the Navy said in the Thursday release.

The aim is to protect roughly 7,155 acres of the upland forest in the watershed directly above the joint base, the service said.

“These native forests protect the source of drinking water for [the joint base] and the surrounding local community, provide a buffer from major storm events that cause erosion and flooding, and subsequently minimize impacts to mission operations,” the Navy said.

“The Navy sees itself as part of the community, and with that role comes a responsibility to protect and preserve the land, water, and other natural resources which Hawaii’s people have honored and depended upon,” Meredith Berger, Assistant Secretary of the Navy for Energy, Installations and Environment, said in the release.

The watershed funding is dwarfed by the $1.1 billion that Congress has approved to deal with the contamination crisis, which displaced thousands of residents for several months and sickened many.

Congress is considering spending another $1.1 billion in fiscal year 2023 to pay for emptying and shuttering the fuel facility.