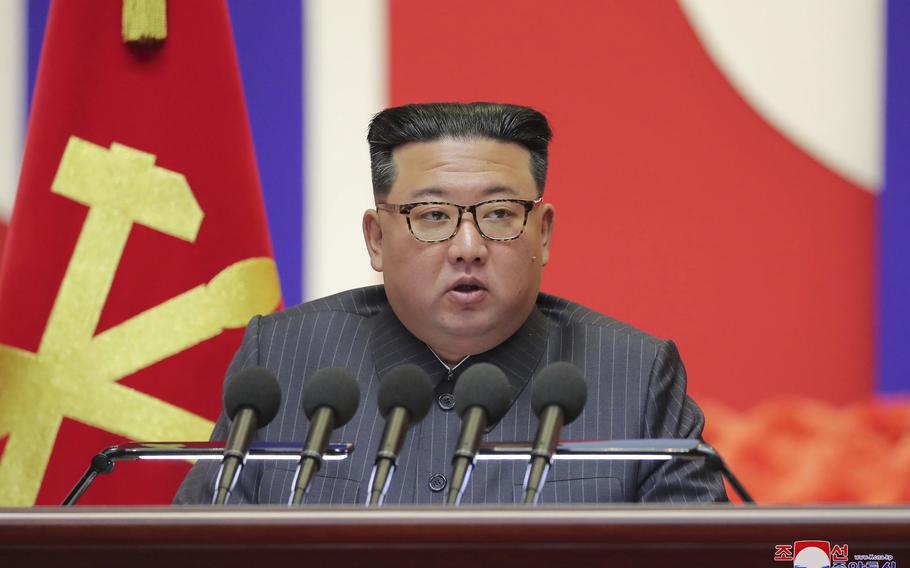 Kim Jong Un’s sister revealed the North Korean leader suffered from a “high fever” during a recent COVID outbreak, as she vowed to “eradicate” South Korean authorities if they continued to tolerate propaganda leaflets the regime blames for spreading the virus.

Repeating dubious claims that the pamphlets caused the recent COVID outbreak in the north, Kim Yo Jong blamed “South Korean puppets” for sending “dirty objects” across the border in leaflets carried by balloons, the official Korean Central News Agency reported Thursday. The revelation of her brother’s illness marked an unusual admission for a regime that rarely comments on the leader’s health — and then only to show that he shares the struggles of the people.

Kim Yo Jong said in a speech the North Korean leader was “seriously ill” during his bout with fever, according to KCNA. Still, she added in a quivering voice that her brother “could not lie down for even a moment because of his concerns for the people,” with state TV showing audience members in tears as she delivered her remarks. She didn’t say whether the elder Kim was among what North Korea calls “fever cases” or specify the date of his illness.

Overweight and a smoker, Kim Jong Un’s health has prompted speculation for years. His public appearances are closely tracked for insights about the autocratic and secretive regime in Pyongyang, especially since his family has a history of heart disease.

Kim Yo Jong delivered a carefully calibrated message to underscore that her brother has suffered, like the country’s citizens, said Rachel Minyoung Lee, regional issues manager at the Vienna-based Open Nuclear Network.

“It is consistent with North Korea’s leadership propaganda strategy in recent years that shifted from deifying the leader to portraying the leader as a regular human being who is constantly with the people and shares his life’s joys and sorrows with the people,” said Lee, who worked as an analyst for the CIA’s Open Source Enterprise for almost two decades.

Kim Jong Un went about 17 days without an appearance in state media last month, although the North Korean leader often drops out of view in summer to spend time at his seaside mansion and megayacht. He attended a ruling party meeting Wednesday in which he claimed “victory” in the “great quarantine war.”

North Korea hasn’t called its hundreds of thousands of reported fever cases “COVID,” perhaps because it lacks a sufficient supply of test kits. The country has refused vaccines from outside, with reports saying planned shipments have been put on hold because of its objections to rules from Covax, a World Health Organization-backed body.

While Kim Jong Un made mention of South Korea in published remarks, his sister issued her first threat against the government of South Korean President Yoon Suk-yeol since it took power in May. “If the enemy continues to do such a dangerous thing that can introduce virus into our republic, we will respond by eradicating not only the virus but also the South Korean authorities,” she said in the speech to ruling party members.

The South Korean Unification Ministry expressed “strong regret” over Kim Yo Jong’s statement, calling her claims “rude” and unsubstantiated. Kim Yo Jong’s threats were couched in conditional terms, analyst Lee said, adding “it is uncertain as of now how far North Korea will go to escalate tensions with South Korea.”

North Korea’s heated rhetoric against Seoul could set the stage for a resumption of military provocations that have slowed in recent months, possibility due to the outbreak. North Korea appears to be readying to conduct its first nuclear test since 2017, government officials from Japan, South Korea and the U.S. have said.

Any display of the weapons in its nuclear arsenal would serve as a reminder of the pressing security problems posed by Pyongyang that have simmered as U.S. President Joe Biden’s administration has been focused on Russia’s invasion of Ukraine.

There are plenty of places where the virus could have entered North Korea. While airports have largely been shut during the pandemic, the regime reopened a rail link with China in January and black-market traders frequently cross the border. A United Nations body has said there’s sea traffic at its international port of Nampho, and illicit trade is conducted on the open seas in violation of sanctions.

North Korea — one of only two UN member states that has not launched a vaccination program — might be seeking to deflect blame away from its leader over an outbreak that was too big to ignore. The government has claimed that “alien things” sent across the border by balloons from the south brought the coronavirus into its territory -- with health experts and the South Korean government saying there are no precedents for the type of transmission described by its neighbor.

“It is quite natural for us to consider strange objects as vehicles of the malignant pandemic disease,” Kim Yo Jong said adding her brother guided an “epoch-making miracle” in eradicating the virus.

Activist groups led by North Korean defectors have sent millions of anti-Pyongyang leaflets by balloon from South Korea for years, and Kim’s regime often seizes upon them when it wants to increase tensions.

Similar leaflets were at the center of a series of North Korean complaints in the summer of 2020 that culminated in the regime blowing up an inter-Korean liaison office on its side of the border. Kim Yo Jong was also at forefront of the rhetorical attacks then against the government of former President Moon Jae-in.

North Korea may be “paving its way to resume its trade with China” by claiming victory, said Yang Moo-jin, a professor at the University of North Korean Studies in Seoul who has advised the South Korean government.