Blinken in Tokyo delivers US condolences over Abe’s death 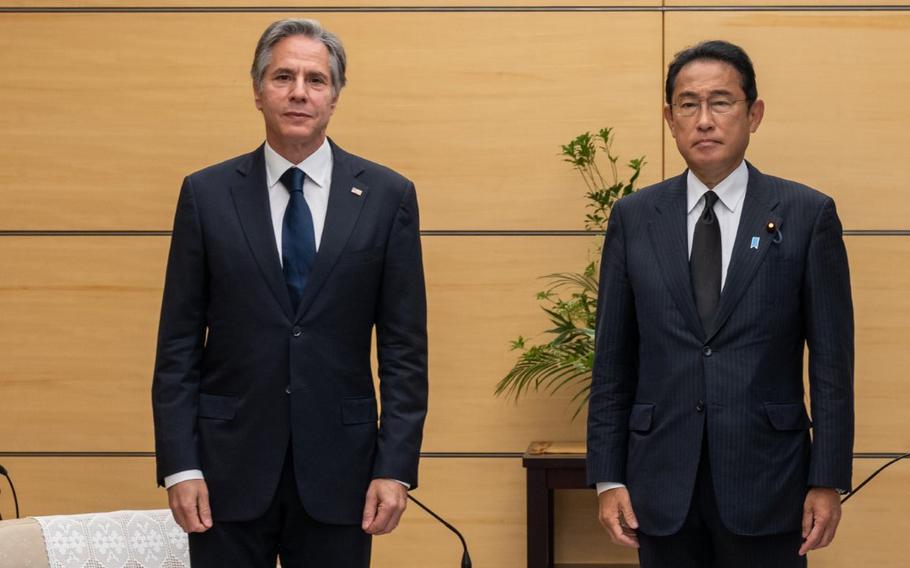 TOKYO — Secretary of State Antony Blinken in a visit to Japanese Prime Minister Fumio Kishida delivered condolences Monday over the death of former Prime Minister Shinzo Abe, who was fatally shot Friday on the campaign trail.

“I shared with our Japanese colleagues the sense of loss, the sense of shock that we all feel, the American people feel, at this horrific tragedy and killing,” Blinken said, according to a readout of his remarks to the media at Yokota Air Base in western Tokyo. “It’s such a loss too because during his time in office Prime Minister Abe really took the relationship between our countries to new heights.”

Abe, his country’s longest serving prime minister, died Friday afternoon after he was shot making a campaign speech outside a train station in Nara, about 300 miles west of Tokyo. A suspect, Tetsuya Yamagami, 41, was wrestled down by security personnel and according to news reports later admitted to police that he fired the fatal shots. He wielded what appeared to be a handmade weapon similar to a shotgun.

In Tokyo, Kishida thanked Blinken for the warm feelings from the U.S., including the visit and sympathy extended by President Joe Biden on a phone call during a Japan-U.S. summit meeting on Saturday, according to a statement Monday from the Japanese Foreign Ministry.

The Japanese leader reiterated that “the despicable act that took place in the midst of an election, the very foundation of democracy, is absolutely unacceptable,” according to the ministry.

Japanese voters at the polls Sunday handed the Liberal Democrats, the party of Kishida and Abe, a significant victory in the upper house of the Japanese Diet.

Kishida said he would defend democracy, not yield to violence and would strive to further strengthen the Japan-U.S. alliance, carrying on Abe’s legacy, according to the ministry statement.

Abe was considered a strong U.S. ally who sought to counter Chinese influence in the Indo-Pacific region and restore Japan’s military strength beyond its constitutionally mandated self-defense role.

The U.S. flag flew at half-staff at Yokota Air Base, headquarters of U.S. Forces Japan, “to show condolences to former Prime Minister Abe,” according to tweet by the 374th Airlift Wing.

Blinken said he was grateful for the meeting with Kishida at an incredibly difficult time. He said he shared letters Biden had written to the Abe family and to the prime minister.

Abe was “a man of vision who had the ability to realize that vision,” Blinken said.

“I came at the President’s behest because, more than allies, we’re friends,” he said. “And when a friend is hurting, other friends show up. We try to help ease the burden, share the sense of loss, give a shoulder, and that’s what we’re trying to do today.”