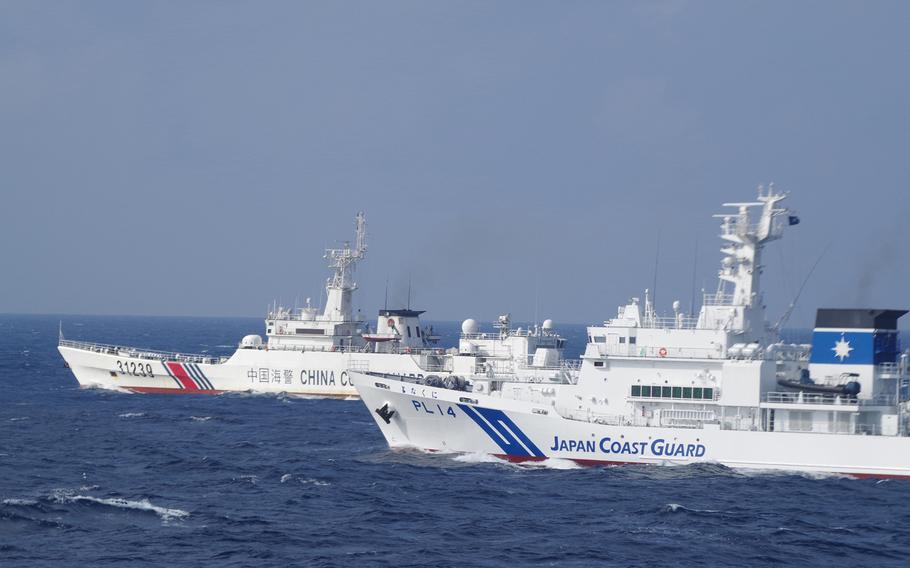 The Chinese ships were still in the area Tuesday despite demands from the Japanese vessels to leave Japan’s territorial waters, Matsuno said. The Japanese government “strongly protested” Beijing’s actions, he added.

Also known as Diaoyu by China, the Senkakus are a chain of small, uninhabited islands located approximately 105 miles northeast of Taiwan and about 280 miles west of Okinawa. Officially administered by Japan, the islands are also claimed by China and Taiwan.

Monday, Russian and Chinese frigates also steamed past the Senkakus just beyond Japan’s territorial waters, Matsuno said Tuesday. He said the Chinese warship was present several minutes and the Russian vessel stayed more than an hour. The Japan Maritime Self-Defense Force monitored the Russian and Chinese presence, according to the Ministry of Defense.

“Senkaku Islands are an inherent territory of Japan, in light of historical facts and based upon international law,” Kihara said in a Monday news conference. “We will act firmly and calmly to protect our territorial land, air and waters.”

Beijing responded by justifying the vessels’ presence in the area.

“Diaoyu Dao and its affiliating islands have been part of China’s territory,” Chinese Foreign Ministry spokesperson Lijian Zhao said at a Monday news conference. “The activities of Chinese vessels in the adjacent waters are legitimate and lawful. The Japanese side has no right to point fingers over these activities.”

China and Japan regularly trade barbs over the island chain, usually over Chinese activity in the area. In September, a flotilla of seven Chinese vessels entered the area, the largest since 2016, the Japan Coast Guard said at the time.

The flotilla’s presence prompted a response from President Joe Biden in October during his first official call with Prime Minister Fumio Kishida, in which Biden reiterated his commitment to defend the Senkakus through military force in the event of an attack.

Activity near the island chain this week, however, followed weeks of activity by Russian and Chinese warships throughout the Japanese archipelago that’s kept the country on alert.

Between June 12 and July 1, two Chinese guided-missile destroyers and a replenishment oiler effectively circumnavigated Japan. A flotilla of seven Russian warships completed a similar journey between June 15 and June 21.

Those trips coincided with the conclusion of a 12-day U.S. naval exercise in the Philippine Sea and preceded the start of Rim of the Pacific 2022, a naval exercise staged from Hawaii and California that includes 26 nations.