On China-Russia border, new bonds are forged against US over Ukraine 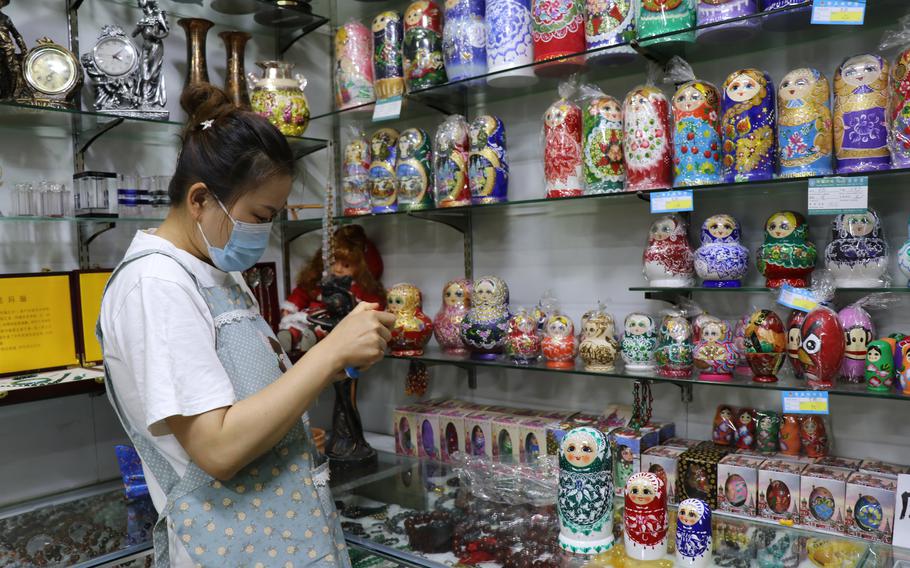 A shopkeeper in Heihe, China, near the border with Russia, arranges souvenirs on June 27, 2022. The tourist town has been hurt by pandemic restrictions against international visitors. (Eva Dou/The Washington Post)

HEIHE, China — On the bank of the Amur River across from Russia, Wang Xuzhen sat scrubbing some shoes on a sunny afternoon.

Wang, 67, has lived for decades within sight of Russia here on China’s northeastern fringe, but she has never felt moved to take the short ferry ride to see Blagoveshchensk. She recalls how frightening the fortified border was before exchanges began in the 1980s. She tells her grandchildren not to forget a Russian massacre of Chinese residents more than a century ago. Near the water, a sign urges vigilance against spies.

Despite the enduring wariness across the river, Wang is clear where she stands. When it comes down to it, she says, Russia and China are on the same team, resisting what she sees as America’s global meddling. She says Ukraine should have accepted its place in Russia’s sphere of influence instead of courting the United States and NATO.

“I support Russia,” she said. “Two neighbors have to stick together so they aren’t bullied.”

Wang’s outlook mirrors that of many of her compatriots. Around the world, ideological lines are hardening. In the United States, politicians and lay citizens alike increasingly view international affairs through the lens of great-power competition against China and Russia. The same is the case in China, where many see the Ukraine war as a proxy conflict with the United States.

Western governments have rallied to the cause of Ukraine, in Europe, and Taiwan, in Asia, calling them bastions of the “free” world that must not fall. In China, these moves are seen as worrisome attempts to ramp up the Western sphere of influence on the doorsteps of Russia and China. 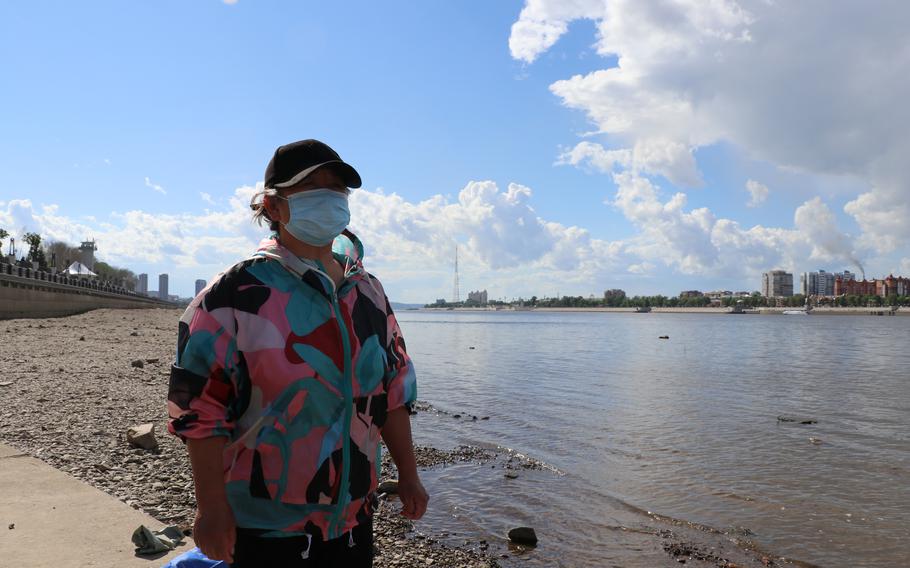 Wang Xuzhen, 67, stands beside the Amur River where she is scrubbing shoes in Heihe, China, on June 17, 2022. She named her dog "Trump" so she can tell him what to do. (Eva Dou/The Washington Post)

The widening ideological gulf is grist for China’s government to shore up its standing at home by playing to nationalist sentiment, galvanizing citizens against an overseas enemy to distract from domestic troubles. It also raises the risk of further international conflict, as governments and militaries boost preparations for any great-power confrontation.

In Heihe, many residents’ views on the Ukraine war don’t stray far from Beijing’s official stance, and it’s hard to say where government propaganda ends and where grass-roots opinion begins. The effect of propaganda is particularly strong in China, where news programs are closely controlled, many international websites blocked and social media comments censored.

People are regularly punished in China for political speech that diverges from the official line, and some in Heihe were wary of saying too much about the war in Ukraine. “We shouldn’t talk about it in the countryside,” said Chi Xiude, a 78-year-old who grows cabbages on the city’s outskirts. “It’s a war. It hurts the average people.”

Wang, though, could hardly contain her anger over U.S. geopolitical interventions abroad. She named her toy poodle “Trump,” after former president Donald Trump, so she can scold the dog: “Can’t you behave? What are you biting now?”

While sympathetic to the plight of Ukrainian civilians, she put the blame on Ukraine’s leaders for not pacifying Moscow.

China-Russia relations have long been tenuous. After close cooperation between the Soviet Union and Mao Zedong’s China in the early 1950s, relations turned bitter, leading to military clashes along the northeastern border in the 1960s.

In recent years, Moscow and Beijing have found common cause against the West, with China’s leader, Xi Jinping, and his Russian counterpart, Vladimir Putin, touting a “no limits” relationship in February. Still, the two countries do not have a formal alliance, and the bond is often described as a marriage of convenience. 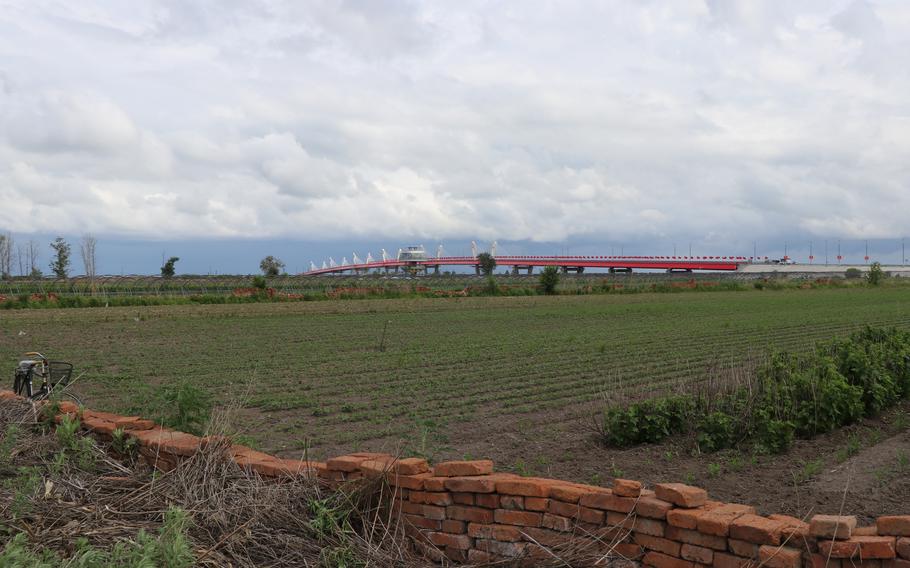 The first highway bridge between Russia and China, seen from Heihe, China on June 16, 2022. The bridge was opened on June 10, 2022, after a more than two-year delay. (Eva Dou/The Washington Post) 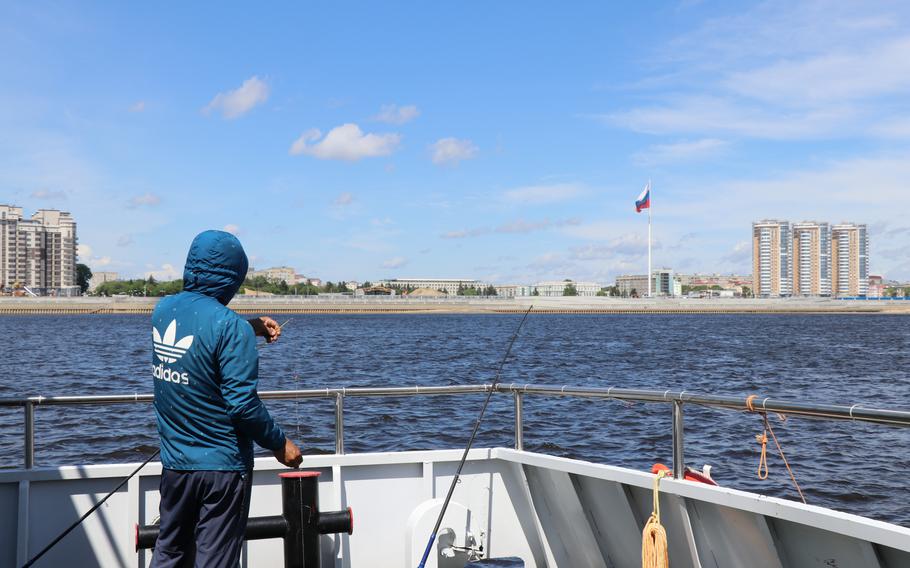 A man from Heihe, China, fishes on the Amur River within sight of Blagoveshchensk, Russia, on June 17, 2022. (Eva Dou/The Washington Post) 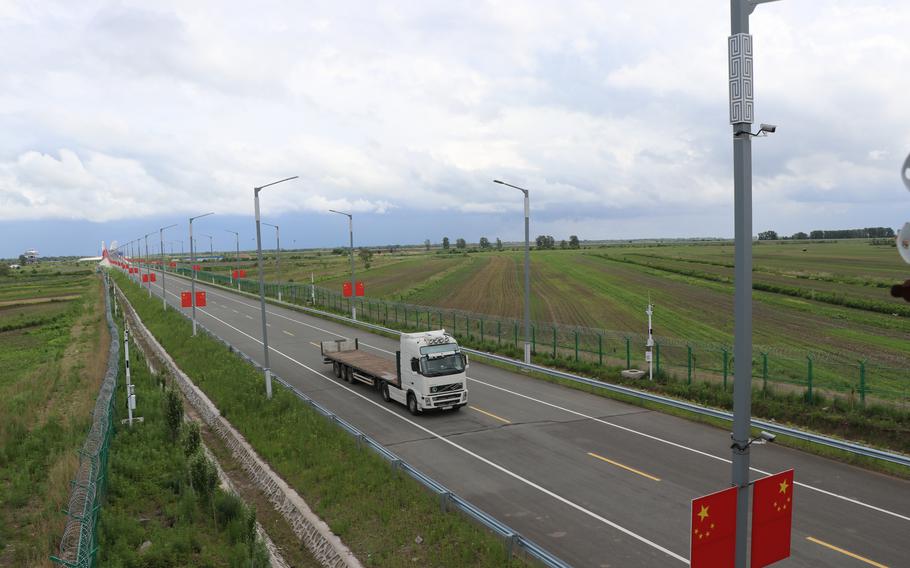 A truck drives from Blagoveshchensk, Russia, to Heihe, China, over the first highway bridge between the two countries on June 16, 2022. The bridge was opened on June 10, 2022, after a more than two-year delay. (Eva Dou/The Washington Post)

On June 10, China’s first highway bridge to Russia opened in Heihe, connecting it to Blagoveshchensk. The 4,200-foot bridge was a symbol of Beijing’s commitment to supporting Moscow — one that Xi touted in a phone call with Putin on June 15. Local Chinese authorities have said the bridge will decrease shipping costs across the river.

But this symbol of friendship isn’t quite so clear-cut: The bridge’s construction was completed in November 2019, but the opening was delayed because of China’s strict pandemic controls and negotiations over tolls. Although it can handle more than 600 trucks a day, the red-trimmed bridge had little use on a recent afternoon, with only a lone, empty flatbed truck seen making its way from Blagoveshchensk.

China has been wary of violating Western sanctions on Russia that could trigger secondary sanctions on its companies. Nor is it willing to relax its “zero covid” measures for the sake of trade. Russian tourists have yet to be allowed back into Heihe, leaving the tourist town ghostly quiet. The two sides sometimes wave to each other as their boats pass at a distance over the Amur’s coffee-brown waters.

Chinese purchases of Russian oil and other commodities have soared, and Xi recently pledged trade with Russia will reach new records. But China’s exports to its northern neighbor remain well below prewar levels, according to a study from the Peterson Institute of International Economics. Beijing has pushed back against Moscow’s requests for greater support in recent weeks, according to Chinese and U.S. officials, The Washington Post reported.

“The Chinese side has been very, very cautious about what kind of trade is going on,” said Jacob Gunter, senior analyst at the Mercator Institute for China Studies in Germany.

Despite Beijing’s efforts at caution, the Commerce Department on Tuesday put five Chinese companies on a trade blacklist for allegedly supplying Russia’s military or defense industry. China’s Foreign Ministry did not immediately respond to a request for comment Wednesday.

Fishing on the bank of the Amur River, a Heihe resident who would only give his surname, Wang, said the Ukraine war had little to do with them, except for higher gas prices. But he said Heihe locals followed the news and knew what was going on.

“There’s no way we’d support Ukraine,” he said. “The Americans are trying to cause trouble.” 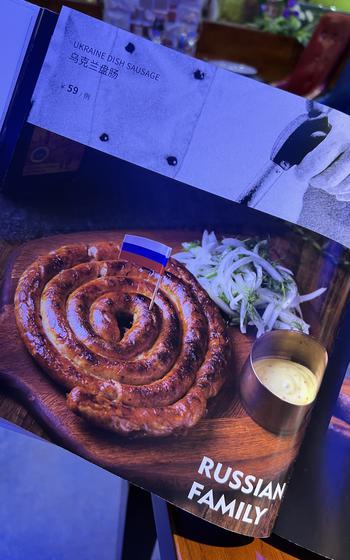 A restaurant menu in Heihe, China, near the China-Russia border, features "Ukraine dish sausage," with a photo of a sausage with a Russian flag on it on June 15, 2022. (Eva Dou/The Washington Post)

Another Heihe resident, 57-year-old Liu Hongyao, agreed, saying China’s fate was linked to Russia’s, so the two needed to hang together. He called Ukraine “cannon fodder,” saying he thought Western countries had somehow provoked it into a self-destructive confrontation with its powerful neighbor.

“If America wipes out Russia, then China is toast too,” he said.

Beijing has avoided calling Russia’s assault an invasion, and it has rebuffed Western requests for it to publicly denounce Moscow. The International Criminal Court is investigating evidence of Russian war crimes in Ukraine.

A handful of figures in China have publicly criticized Moscow, including a group of university professors who published an open letter in February. “As a country that was once ravaged by war, where families were destroyed, where everywhere people were dying of starvation ... [w]e sympathize with the pain of the Ukrainian people,” it said.

Chinese authorities have tamped down recent news of Russian atrocities toward civilians in Ukraine. But there is a different collective memory here in Heihe that is allowed.

In 1900, amid Russia-China clashes, Russian Cossacks drove the Chinese residents on the far side of the Amur into the river, resulting in thousands of deaths. People in Heihe today continue to recount the horror in vivid detail, although it happened long before they were born. “The river was full of blood,” Liu said.

The Aihui history museum on the outskirts of Heihe keeps alive the memory of that massacre in Blagoveshchensk, as well as other Chinese humiliations, such as when the Qing dynasty ceded a swath of land across the river to Russia in 1858.

Wang said she had taken her grandchildren to the museum twice.

“I told the children, ‘Never forget the nation’s humiliation,’” she said. “A country must have strong national defense. Or look what happens. They cut the barbed-wire fence and pushed the peasants into the river.”

Lyric Li in Seoul contributed to this report.