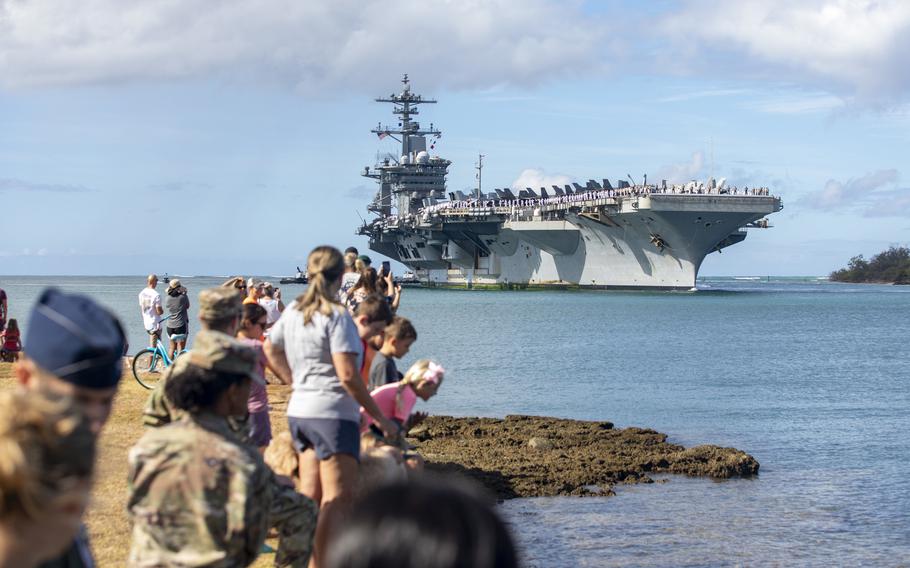 FORT SHAFTER, Hawaii — The Rim of the Pacific maritime exercise kicked off Wednesday in Hawaii, one day after the aircraft carrier USS Abraham Lincoln steamed into Pearl Harbor for the biennial drill.

Navies from 26 nations are participating in RIMPAC, which runs to Aug. 4 in waters near Hawaii and Southern California.

Thirty-eight ships, four submarines, more than 170 aircraft and roughly 25,000 personnel are expected to participate in the exercise, according to the Navy.

The Navy has not yet released an official list of ships joining the drills, but it has tweeted out the arrival of vessels over the past week. Navies and ministries of participating nations have also posted updates on ships on their way.

Among the U.S. ships involved are the Abraham Lincoln, the Zumwalt-class guided-missile destroyer USS Michael Monsoor and the Arleigh Burke-class destroyer USS Sampson.

Three of the U.S. Navy’s unmanned surface vessels — Nomad, Sea Hunter and Ranger — will also take part in the drills.

South Korea has sent three ships and one submarine, while Australia has brought three ships. Japan is participating with two destroyers.

This year’s RIMPAC, which returns in full after a significant downsizing in 2020 due to the pandemic, comes amid rising tensions with China.

China participated in RIMPAC in 2014 and 2016 but was disinvited in 2018 over its ongoing efforts to militarize portions of the South China Sea. Chinese military aircraft also routinely fly into Taiwan’s air defense zone.

Earlier this month, China’s Foreign Ministry emphasized Beijing’s claim to sovereignty over the Taiwan Strait, a narrow strip of sea separating the Chinese mainland from Taiwan. China regards the island, which has a democratically elected government, as a renegade province that must at some point come under Beijing’s rule.

The U.S. military continues to sail and fly through the strait, which it regards as international waters.

RIMPAC brings an influx of visitors that is a boon to Honolulu’s restaurants and bars, but not everyone welcomes the biyearly gathering.

An online petition by the Pacific Peace Network titled “Cancel RIMPAC 2022 — The World’s Largest and Most Dangerous Naval War Maneuvers” had garnered 2,650 signatures as of Wednesday.

“RIMPAC dramatically contributes to the destruction of the ecology and aggravation of the climate crisis in the Pacific region,” the petition states. “RIMPAC war forces will blow up decommissioned ships with missiles endangering marine mammals such as humpback whales, dolphins and Hawaiian monk seals and polluting the ocean with contaminates from the vessels. Land forces will conduct ground assaults that will tear up beaches where green sea turtles come to breed.”

The Navy has not announced the specifics of drills planned for the next month, but past RIMPAC exercises included the sinking of decommissioned ships and amphibious landings near Marine Corps Base Hawaii.