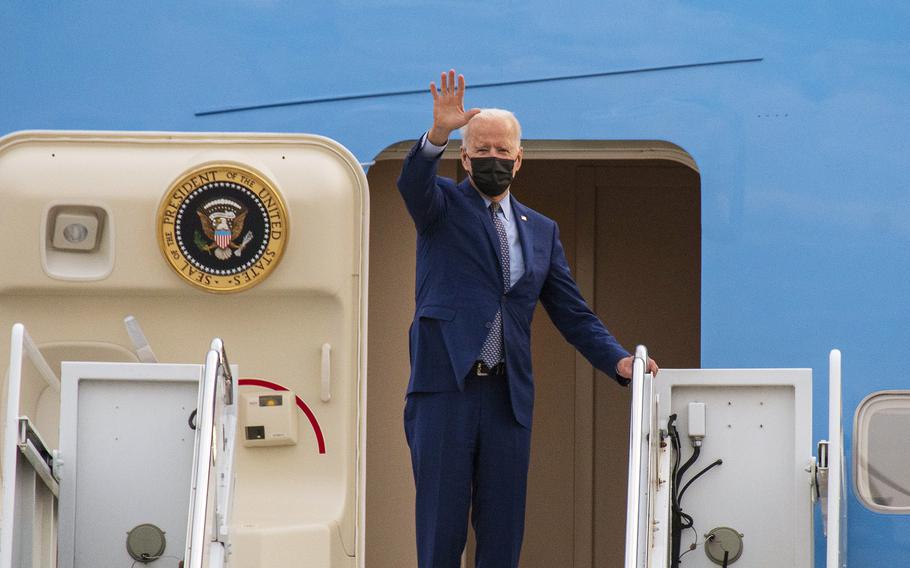 TOKYO – The Japanese government has given up scheduling an April visit by President Joe Biden due to his tightened schedule around the war in Ukraine, Kyodo News reported Wednesday.

Instead, the government hopes for a face-to-face meeting between Biden and Japanese Prime Minister Fumio Kishida at a May summit meeting of Quad leaders, the loose alliance of Japan, Australia, the U.S. and India, according to the report.

Officially, no date is set for either event, according to Japan’s Ministry of Foreign Affairs.

“A date for the Quad summit meeting and visit by President Biden is currently being coordinated but no specific date has been decided,” the ministry’s international press division told Stars and Stripes in an email Thursday.

Kishida proposed for Biden to visit Japan at the end of April when the two met in Brussels during the Group of Seven summit last month, Japanese television station Nippon TV reported.

The Japanese government also planned to host the Quadrilateral Security Dialogue, the Quad summit, by the end of April, and schedule the Biden-Kishida meeting at the same time, Fuji Television reported on Wednesday.

However, Biden’s schedule forestalled the trip as he deals with the crisis in Ukraine, Kyodo News reported, citing an unnamed diplomatic source.

The calendar is further complicated by anticipated general elections in Australia, according to Kyodo News. Australian Prime Minister Scott Morrison is expected to call a general election in mid or late May, the Sydney Herald reported Wednesday.

Nonetheless, Biden’s visit and the Quad summit will be coordinated for some time in late May, according to Kyodo News.

Although Biden has not visited Japan as president, he and Kishida have had bilateral and multilateral discussions and video conferences on common issues such as regional affairs, the economy, global security and the Ukraine situation, according to the ministry’s statement.

The Quad is an Indo-Pacific alliance aiming to promote “a free and open Indo-Pacific,” but it is essentially a means of countering China’s growing economic, political and military influence in the region.

The first in-person Quad summit meeting was held in Washington, D.C., in September. The leaders have agreed to meet annually.