Coronavirus continues its weekly retreat at US military bases across Japan 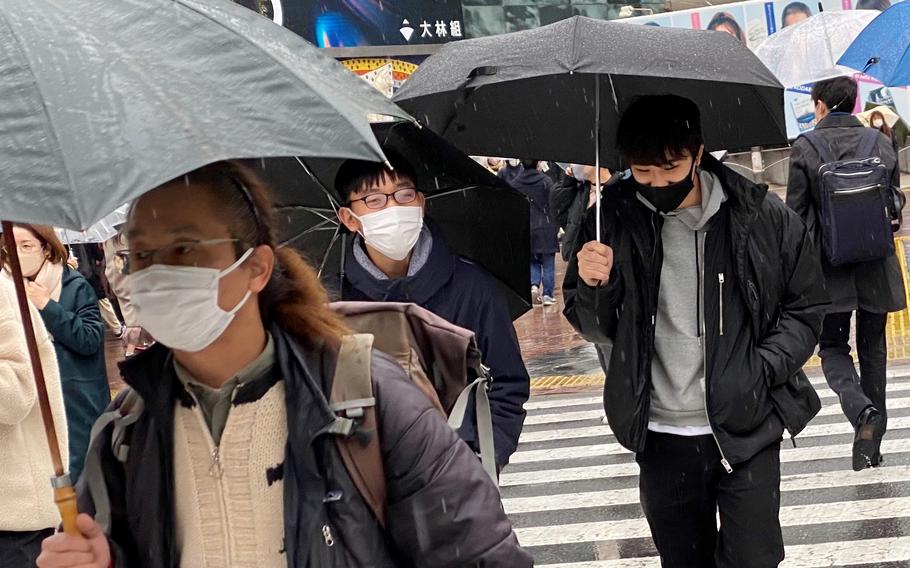 TOKYO – Japan’s capital city, which will drop most of its three-month-old pandemic restrictions next week, reported another 7,825 COVID-19 infections Friday, according to public broadcaster NHK.

New case numbers in Japan, although they fluctuate day to day, continue to decline from one week to the next.

Tokyo on Thursday averaged 8,159 new cases per day during the previous seven days, according to the most recent metropolitan government data available. The seven-day moving average was 9,402 cases on March 10.

At the omicron variant’s peak on Feb. 8, the city’s seven-day average reached 18,575 new cases per day.

U.S. Forces Japan, which did away with most of its COVID-19 mask requirements on Monday, reported 52 new cases Friday, 98 new cases Thursday and 102 Wednesday, according to updates this week.

The command ended the working week with an average 83.6 new cases per day.

Yokosuka Naval Base, the 7th Fleet’s homeport south of Tokyo, reported 12 new cases Friday. It was the only U.S. base with more than 10, according to USFJ.

USFJ reported one person hospitalized Wednesday, but no serious cases of the coronavirus respiratory disease. Yokosuka that day accounted for 23 new cases, the Marine Corps base Camp Foster on Okinawa had 18 and Marine Corps Air Station Iwakuni had 15, according to USFJ.

Three installations reported 17 new cases Thursday: Yokosuka, Kadena Air Base on Okinawa and Misawa Air Base in northeastern Japan. MCAS Iwakuni followed with 12, according to USFJ.

Kadena, one of the few U.S. installations still self-reporting case totals, had 108 cases as of Wednesday, according to its website.

Okinawa prefecture, home to tens of thousands of U.S. troops and their families, on Friday reported another 618 had contracted the respiratory disease, along with 15 new cases in the U.S. military population, according to the prefectural Department of Public Health and Medical Care.