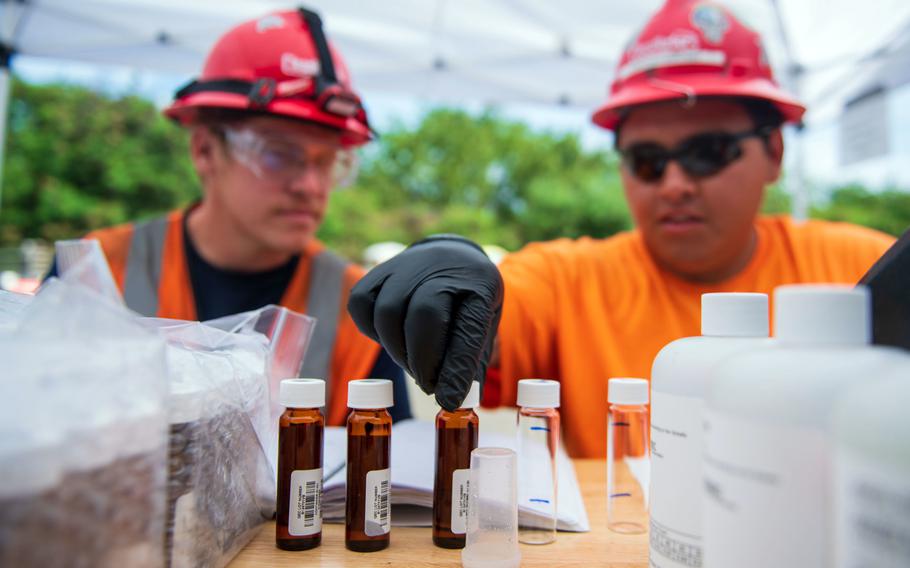 Contractors with the Naval Facilities Engineering Systems Command process water samples March 17, 2022, as a part of monitoring at Red Hill well, which is contaminated with Navy jet fuel. (Mar’Queon A. D. Tramble/U.S. Navy)

FORT SHAFTER, Hawaii – Safe drinking water has been restored to all homes in military housing communities on Oahu that were contaminated by petroleum in the Navy’s water system late last year, the Hawaii Department of Health said Friday.

Just over 9,700 homes in military housing on and near Joint Base Pearl Harbor-Hickam were affected by jet fuel that had seeped into the Red Hill well, one of three used by the Navy.

In late November, residents began complaining of foul-smelling tap water, with some suffering headaches, nausea, diarrhea, rashes and other maladies.

By the end of December, thousands of residents had temporarily relocated to Waikiki Beach hotels as the Navy picked up the lodging tab and worked at flushing and cleaning the system’s main pipes and those in each residence.

The Navy traced the contamination to the Red Hill fuel storage facility, a series of massive underground tanks built during World War II.

Defense Secretary Lloyd Austin announced on March 7 that the facility would be permanently closed before the end of next year.

The plan for flushing, sampling and testing homes was developed by the Interagency Drinking Water System Team, whose members come from the Navy, Hawaii Department of Health and U.S. Environmental Protection Agency.

The homes, along with other military buildings, schools and daycare centers, were divided into 20 zones, the first of which were declared as having safe water about a month ago.

“I can’t emphasize enough how much I admire the strength of the individuals and families impacted by this crisis,” Kathleen Ho, deputy director of environmental health for the Hawaii Health Department, said in a news release Friday.

Clearing the final four zones as having safe water capped “months of work,” she said.

“However, our work is not done,” she said. “We will continue rigorous oversight to protect drinking water, including our aquifer, and will hold the Navy accountable to protect public health and the environment.”

Secretary of Navy Carlos Del Toro hailed the “patience and resilience” of residents displaced by the contamination.

“If they have any concerns or issues regarding their water while moving back into their homes, I ask them to contact the rapid response teams immediately,” he said in a Navy news release Friday. “Our priority will continue to be their safety and returning them to a new, better normal.”

The Navy will continue to monitor homes by sampling and testing a small percentage from each zone over the course of the next two years. It is also continuing efforts to remove petroleum from the Red Hill well, which was isolated from the distribution system in late November.

On Nov. 29, the head of U.S. Pacific Fleet ordered a command investigation into the cause of fuel leaks from the Red Hill fuel tanks on Nov. 20 and May 6.

The Navy announced Wednesday that the initial probe, which had not been publicly released, had inadequately assessed the Navy’s response to the leaks and that further investigation was needed.