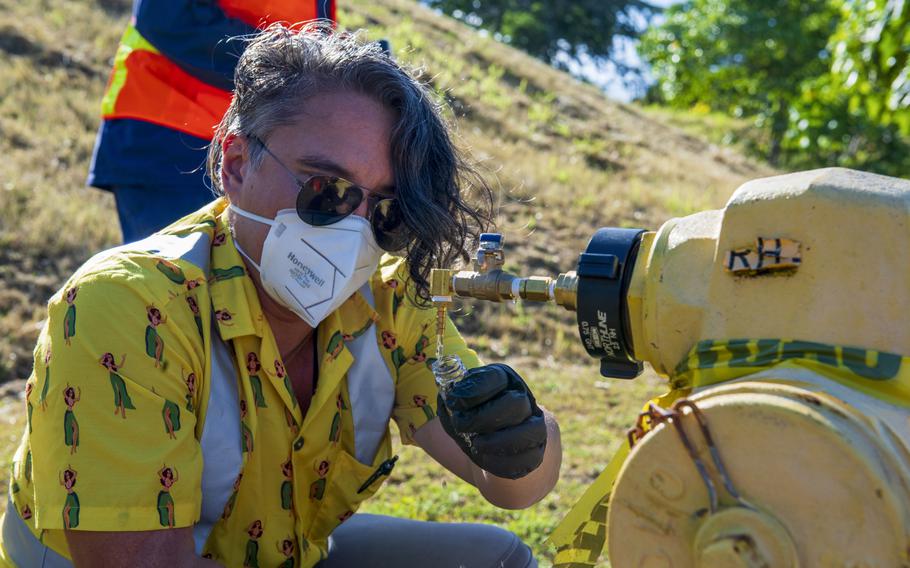 A Navy contractor collects a water sample at Red Hill Housing in Honolulu, March 11, 2022, as part of a long-term monitoring plan for drinking water contaminated by jet fuel. (Mar’Queon A. D. Tramble/U.S. Navy)

FORT SHAFTER, Hawaii – Almost four months since the Navy began an investigation into the causes of the widespread well-water contamination in Hawaii, the service is hitting reset.

The level of detail in that investigation was deemed inadequate by Adm. William Lescher, vice chief of naval operations, and he has ordered further review into how the Navy responded to two separate fuel leaks last year, according to a Navy statement released Tuesday.

In late November, Adm. Samuel Paparo, the head of U.S. Pacific Fleet, ordered a command investigation into fuel leaks from the underground Red Hill storage facility near Joint Base Pearl Harbor-Hickam after jet fuel turned up in one of three wells the Navy uses for its water distribution system.

Paparo ordered the probe to specifically review the causes of leaks on Nov. 20 and May 6.

The investigation results were eagerly awaited by state officials, Hawaii’s congressional delegation and thousands of residents of military communities who were displaced this winter by the tainted water.

Many were relocated to Waikiki Beach hotels, with some suffering from headaches, nausea, diarrhea, rashes and other maladies.

“Adm. Lescher directed the supplemental investigation because the initial command investigation, while sound in many respects, did not include a sufficient review of actions the Navy took in response to the May and November releases,” Rear Adm. Charlie Brown, the Navy’s chief of information, said in a statement Tuesday.

Waters is the director of the Military Personnel Plans and Policy Division in the Office of the Chief of Naval Operations, according to a Navy biography.

The call for further understanding of the Navy’s actions is remarkable given that Paparo’s original investigation mandated “identifying the root causes and remedial actions to safeguard the local environment and ensure this does not happen again,” the Navy said in a Nov. 29 news release.

“The Navy has a sense of urgency to get this investigation complete, but we also must have a full understanding of the facts to be able to fully assess the efficacy of the Navy’s response efforts,” Brown said. “We are committed to working as swiftly as is feasible to get this information while continuing our ongoing response.”

The state in January ordered the facility emptied, a mandate the Navy opposed.

Defense Secretary Lloyd Austin announced on March 7 that the facility would be permanently closed before the end of next year.

The Navy spent the winter flushing out its water distribution system, individual houses and other base structures in an attempt to get residents back into their homes.

As of Tuesday, 90% of the 9,715 homes using the Navy water system had tap water declared safe for all uses by the Hawaii Department of Health, Capt. Darren Guenther, chief of staff for Navy Region Hawaii, said Tuesday during a daily briefing livestreamed on Facebook.