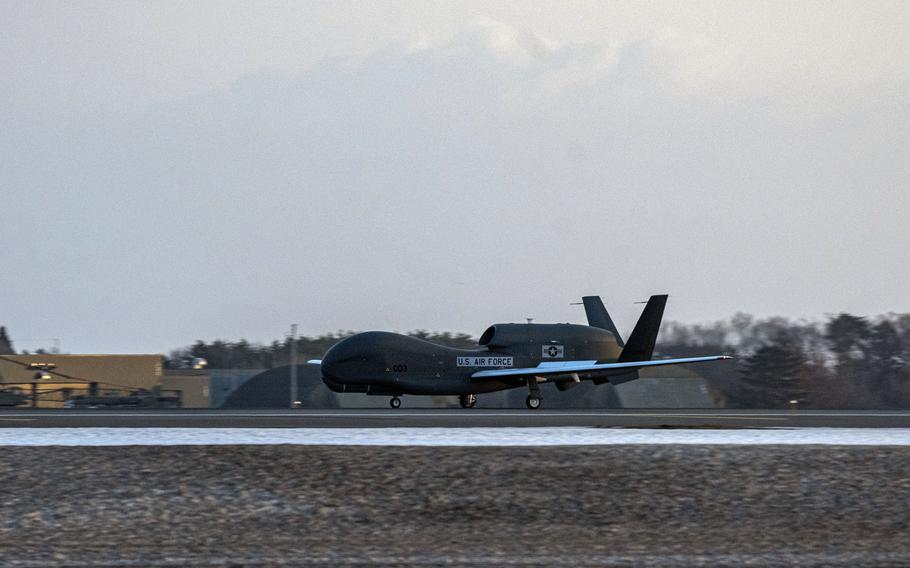 An RQ-4B Global Hawk surveillance drone lands at Misawa Air Base, Japan, March 12, 2022. It is the first of three that will be operated by the Japan Air Self-Defense Force. (Antwain Hanks/U.S. Air Force)

An RQ-4B Global Hawk surveillance drone that landed Saturday at Misawa Air Base in northeast Japan is the first of three that will be operated by the Japan Air Self-Defense Force, according to the unmanned aircraft’s manufacturer.

“Congratulations to our JASDF counterparts on their newest capability! The addition of the RQ-4B Global Hawk to the Japan Air Self-Defense Force’s inventory directly supports the defense of Japan, and peace and stability in the Indo-Pacific region,” said a message accompanying the images.

The Global Hawk flies at 60,000 feet and has a line of sight to targets more than 340 miles away, according to manufacturer Northrop Grumman.

The exact range of the aircraft’s cameras and sensors is classified, but a Global Hawk flying near the Korean Demilitarized Zone, for example, could see well beyond the Yalu River that marks North Korea’s border with China.

The new Global Hawks will “conduct information gathering in areas relatively remote from Japan, as well as persistent airborne monitoring during situations with heightened tensions,” Japan’s Ministry of Defense said in a statement after the drone landed.

“The arrival of the first Japan Global Hawk is an important milestone in the development of this critical security asset,” Jane Bishop, vice president and general manager for global surveillance at Northrop Grumman, said in her company’s statement. “The autonomous Global Hawk will provide the Japan Air Self-Defense Force with persistent, high-altitude surveillance of the Indo-Pacific.” An RQ-4B Global Hawk surveillance drone sits in a hangar at Misawa Air Base, Japan, March 12, 2022. It is the first of three that will be operated by the Japan Air Self-Defense Force. (Antwain Hanks/U.S. Air Force)

The U.S. Air Force has positioned its Global Hawks at Misawa for several summers since 2014. The drones come to Japan to avoid typhoons at Andersen Air Force Base, Guam. In recent years, including 2020, they have operated out of Yokota Air Base in western Tokyo during the summer.

South Korea has four Global Hawks that are believed to be flown out of Sacheon Air Base, near the port of Busan, according to an October report by Jane’s Defence Weekly.

The Royal Australian Air Force will acquire seven RQ-4C Tritons, the maritime version of the drone, and will fly them from RAAF Base Edinburgh, according to the service’s official website.

“The acquisition of these platforms, and subsequent operations by our allies, sends a strong signal to regional adversaries that the United States and our allies are equipped and ready to detect and defend our nations from regional threats,” he said.