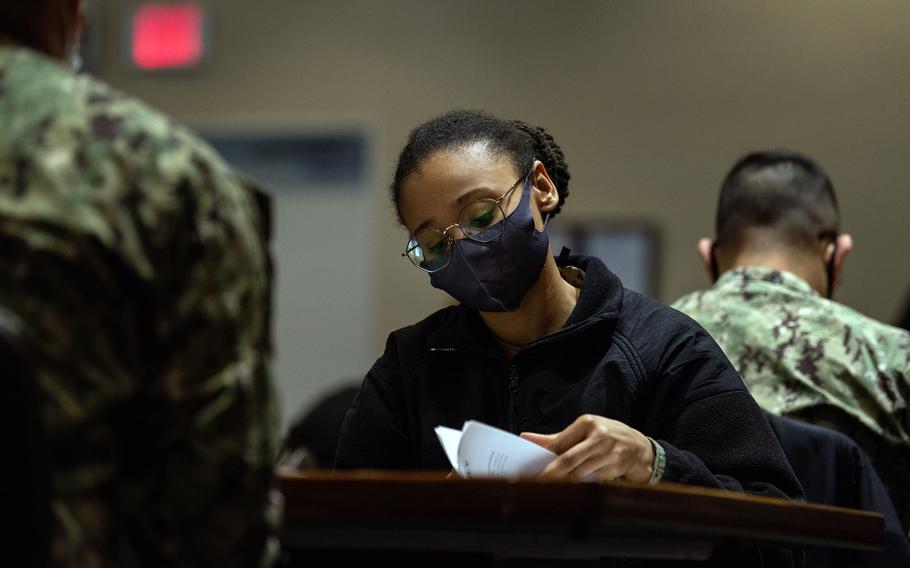 TOKYO — Two of the largest U.S. military installations in Japan have dropped their mask requirements, effective Monday, another sign that COVID-19 is loosening its hold on personnel stationed in the country.

Yokota Air Base, the airlift hub in western Tokyo that also serves as headquarters for U.S. Forces Japan, and Kadena Air Base on Okinawa, home of the 18th Fighter Wing, dropped their mask mandates, regardless of vaccination status but with some exceptions, according to base commanders’ announcements.

Masks must be worn outside any U.S. military installation by anyone under the status of forces agreement, which covers the rights and responsibilities of the U.S. military in Japan, including family members, according to the U.S. Forces Japan public health policy update Monday.

Defense Department schools at Yokota also dropped mask requirements for indoors and on buses, according to a notice sent to parents by four principals at base schools on Monday.

Masks are still required at medical and dental providers on both bases.

At Yokota anyone with COVID-19 symptoms, a positive test or exposure to someone with the infection “should” wear a mask until medically cleared, according to an order signed Saturday by base commander Col. Andrew Campbell.

Kadena on its website said anyone in those situations has to wear a mask. They are also still required inside the Air Mobility Command terminal, according to an update on the Kadena website.

Yokosuka Naval Base, homeport of the U.S. 7th Fleet south of Tokyo, is also preparing to ease its on-base mask guidelines, according base spokesman Randall Baucom.

The base will require masks on anyone inside a child-care facility but wearing a mask indoors will become the exception rather than the rule, Baucom wrote in an email Monday to Stars and Stripes.

The change follows the USFJ policy update. The command will keep the off-base mask requirement in place along with “aggressive Japan-entry testing protocols for SOFA personnel,” while permitting base commanders to loosen their mask requirements, according to USFJ spokeswoman Air Force Lt. Col. Brooke Brander.

“With current high levels of vaccination and high levels of population immunity, the risk of medically significant disease, hospitalization, and death from COVID-19 is greatly reduced for most people,” Brander wrote Monday in an email to Stars and Stripes.

USFJ eased its mask requirement, she wrote, in keeping with the Japanese government’s public health measures and guidance from the Defense Department and the Centers for Disease Control and Prevention.

U.S. installations considered to have medium or low community levels of COVID-19 may ease their mask requirements, Brander said. Yokota is at a medium level, according to the school principals’ letter.

Those levels are set according to the number of new COVID-19 cases and COVID-19 hospital admissions per 100,000 population in the past seven days and the percentage of hospital beds occupied by COVID-19 patients, Brander said.

“The stringent COVID-19 mitigations implemented by USFJ have bent the curve, inhibiting the spread of the virus on U.S. installations,” she wrote. “COVID-19 case rates on U.S. installations remain low and have continually decreased for the past six weeks in part due to a high vaccination rate of over 98% of USFJ active duty personnel.”

In addition, approximately a third of eligible service members, family members and Japanese employees of the U.S. military have received booster shots since November, Brander said.

Yokota also announced Friday that it would open its gates to the surrounding communities for Friendship Day on May 21 and 22, an event that brings thousands of people to eat, hear live entertainment and see military aircraft displays.

The base will also be open March 26 for the Sakura Spring Festival, which also brings Japanese visitors to see the cherry blossoms. Both events were off the base schedule for two years as the coronavirus pandemic held sway.

Stars and Stripes reporter Alex Wilson contributed to this report