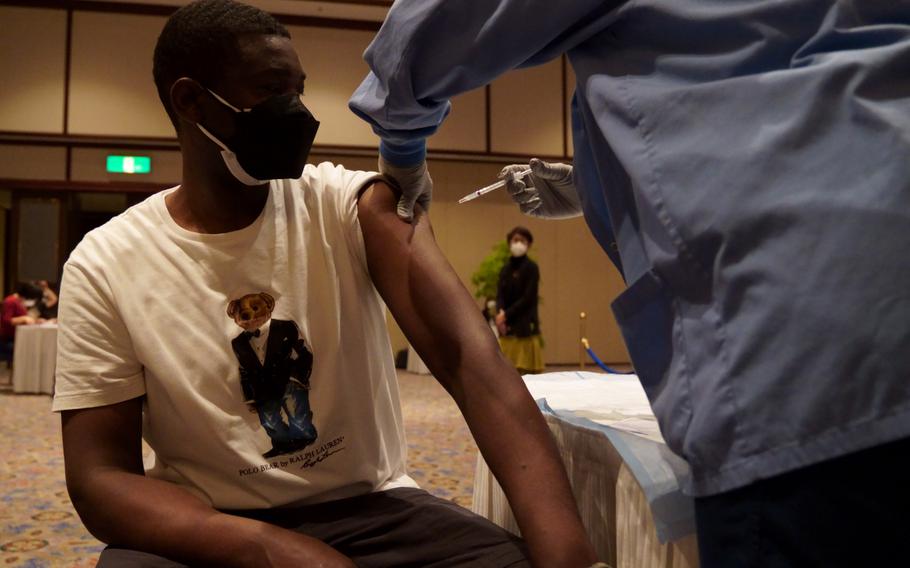 Erastus Nduru, manager of an eatery inside the New Sanno Hotel in Tokyo, gets a COVID-19 vaccine at the Navy-run facility on Feb. 16, 2022. (Akifumi Ishikawa/Stars and Stripes)

TOKYO — The number of new COVID-19 infections in Japan’s capital city on Monday was 4,000 less than a week prior, according to public broadcaster NHK and city data.

Tokyo confirmed another 5,374 people were infected with the coronavirus respiratory disease, 4,258 fewer than Feb. 28.

Also Monday, the Japanese government lifted emergency measures in 13 prefectures across the country, from Niigata in central Honshu, the largest of Japan’s four main islands, to Kagoshima at the tip of Kyushu, the southernmost of the four, according to a Japan Times report.

The government also extended to March 21 the emergency in Tokyo and 17 other prefectures, including its neighbors Kanagawa, Chiba and Saitama, thanks to a slow decline in case numbers, according to the Asahi Shimbun on Thursday. The emergency was scheduled to end Sunday.

It means that, among other measures, bars and restaurants are still encouraged to close early and to curtail their alcohol sales.

U.S. Forces Japan on Friday reported 85 new cases from the previous 24 hours at 15 installations. The command previously reported 99 new cases on Thursday. The USFJ daily average in March, so far, is 88.5 new cases per day.

Yokosuka Naval Base and the Misawa and Yokota air bases reported the highest figures, according to USFJ’s most recent update. Yokosuka, homeport of the U.S. 7th Fleet south of Tokyo, and Misawa, where the Air Force’s 35th Fighter Wing is located, each reported 18 new infections. Yokota Air Base, where USFJ is headquartered in western Tokyo, accounted for 10. Five installations reported no new cases.

None of the people with new COVID-19 cases are hospitalized or considered seriously ill, according to USFJ.

Okinawa prefecture, where the bulk of U.S. forces in Japan are stationed, reported 278 people tested positive for the coronavirus respiratory disease on Monday, 536 on Sunday and 900 on Saturday, according to the prefectural Department of Public Health and Medical Care. The department also reported 21 new cases in the U.S. military population Monday — 49 on Sunday and 46 on Saturday.

Stars and Stripes reported Mari Higa contributed to this report.