Lobbyists urge lawmakers to let them roam the Capitol again 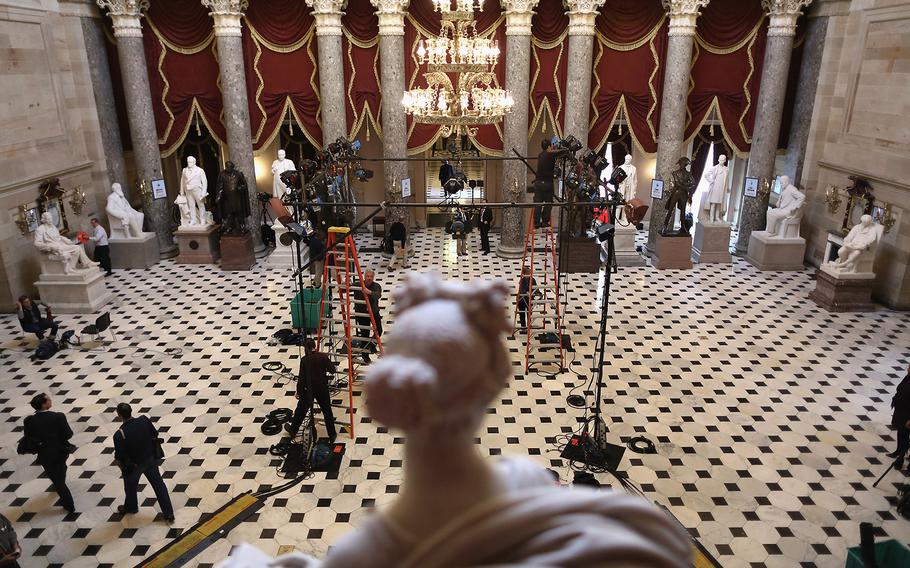 Television lighting technicians build sets inside Statuary Hall for post-speech interviews hours before U.S. President Barack Obama delivers the State of the Union address to a joint session of Congress at the U.S. Capitol on Jan. 28, 2014, in Washington, DC. (Chip Somodevilla/Getty Images/TNS)

WASHINGTON (Tribune News Service) — Lobbyists have a renewed plea to leaders in Congress: Let us roam the Capitol complex.

After two years of pandemic- and insurrection-related security restrictions, some lobbyists are putting their advocacy skills toward an effort to reopen the legislative buildings widely to tour groups and lobbying coalitions.

The National Institute for Lobbying and Ethics, which represents lobbyists, is putting together a letter to House and Senate letters to be delivered Wednesday, said the group's founder, Paul Miller. He declined to say how many lobbyists or lobbying groups had signed but said: "It's a good number."

"The country has reopened, and businesses have employees back in the office," a draft of the letter states. "Sporting and concert venues have opened for live events. And, with restaurants trying to make a comeback, we would urge Congress to do the same and reopen to the people without appointments starting July 11, 2022. What better message to send to the public that we are turning the corner on two years of very difficult and challenging times for this country than by announcing that Capitol Hill is again open to the public."

President Joe Biden called for a greater return to normalcy, including among federal workers, in his State of the Union address this week.

"It's time for Americans to get back to work and fill our great downtowns again. People working from home can feel safe to begin to return to the office," Biden said. "We're doing that here in the federal government. The vast majority of federal workers will once again work in person."

Currently, lobbyists may conduct in-person meetings on Capitol Hill, so long as a congressional aide signs them in and escorts them around the buildings. Rules are especially strict on the House side, said Miller, a partner with the firm Miller Wenhold Capitol Strategies. It's a concern he's held for more than a year.

Ryan Donovan, executive vice president and chief advocacy officer for the Credit Union National Association, said his group would sign the letter and supports efforts to reopen the Capitol more widely to visitors.

CUNA had its annual legislative conference in Washington this week with 4,000 members. He said the restrictions, especially on the House side, made it difficult to schedule in-person meetings, though some attendees did.

"Some meetings were held virtually, and a number of them were held off the Capitol complex," Donovan said, citing the Republican Capitol Hill Club and Bullfeathers pub, which are a half block from the Cannon House Office Building. "Some were in our office. There were a smaller number that were held in congressional offices, in House office buildings. We feel pretty confident that we hit just about every office, either virtually or in person."

The COVID-19 pandemic isn't the only obstacle to reopening. The violent attack on the Capitol on Jan. 6, 2021, is also a reason for additional restrictions, Miller added.

His group has proposed a security pass for lobbyists and other frequent visitors to the Capitol.

Miller said the process for entering the Capitol complex now can be "painful."

"Some days it's not worth going down there for those meetings," he said.

Not all lobbyists, though, believe the Capitol is ready for an onslaught of visitors.

Daniel Schuman, policy director for the group Demand Progress, said both COVID-19 and security issues, as well as longstanding fire hazards, made the Capitol complex unsafe for the full return of visitors.

The Capitol Police force, he said, is "not sufficiently staffed to be able to maintain security in the Capitol complex."

In December, a Capitol Hill employee with a loaded gun in a backpack was able to put the bag through a security screener, pick it back up and enter the Longworth building before police noticed the weapon on the X-ray screen and locked the building down while they searched for him.

Schuman said lobbying remotely was working for him as an alternative.

"I'm a registered lobbyist, and I regularly have meetings with members of Congress all the time by Zoom," he said, adding that it saves time traveling between the Capitol Hill office buildings, too. "So for me, it's actually more convenient."

"I want, as much as anyone, for the Capitol complex to be open to everyone, but we are not yet at a point where the physical and health security risks have been adequately addressed," Schuman added.

Lobbyist Cesar Conda, a founding principal and policy adviser at Navigators Global, said he ventured to the Capitol this week for the first time in two years.

"I worked in and around the Capitol for 18 years as a Senate staffer. It was a great thrill to go back inside after two years," he said.

But he noted big differences. Before the pandemic, lobbyists could access the complex to take a meeting with a lawmaker or aide. "Once you had your meeting, lobbyists could roam around the Capitol all day to buttonhole members and staff," Conda said. "Yesterday, I had a meeting on the Senate side of the Capitol. Once you clear the security and appointment desk, someone from the office you are visiting escorts you to the meeting and then back to the exit. No more roaming around freely."

He said he supports a larger reopening of the complex to lobbyists and other visitors.

"I really don't think there are any health, safety or security reasons for keeping the Capitol closed to outsiders," he said. "It should be open to tourists, advocacy groups, lobbyists, the way it was pre-pandemic."