After keeping the virus at bay for so long, COVID-19 is now tearing through the nation’s population courtesy of the highly infectious omicron variant. In the span of two weeks, new case numbers exploded from less than 1,000 a day to more than 22,000.

“Psychologically it’s quite a big shock because to date the pandemic has been largely something that’s happened to other people,” said Michael Baker, Professor of Public Health at the University of Otago. “Until recently, the only people I knew who got infected with the virus lived overseas.”

New Zealand is one of the pandemic success stories. When COVID-19 first arrived, the government slammed the border shut, imposed one of the toughest lockdowns in the world and eradicated the virus from the community, allowing a quick return to normal. So far, the death toll is just 65.

But the emergence of more infectious strains in the second half of last year — first delta then omicron — proved too much for Prime Minister Jacinda Ardern’s elimination strategy.

Tight border controls, dubbed “Fortress New Zealand,” then became a mechanism to slow the spread of the virus, rather than to keep it out, while the government rushed to get people vaccinated.

Today, omicron is infiltrating daily life in a way New Zealanders have never experienced. Universities across the country are awash with the virus as the new semester starts, and high schools are asking pupils to study at home as infections rise. In capital city Wellington, usually bustling streets are almost empty as people either work from home or isolate as they or household members fall ill.

After outperforming most of its peers during the pandemic, New Zealand’s economy faces some bumpy months ahead.

“New Zealanders haven’t experienced massive outbreaks in the community as other countries have, and I do think it’s taking people a bit of adjustment,” Finance Minister Grant Robertson said in an interview. Despite there no longer being any restrictions on going out or traveling, “a lot of people are self-policing because this is the first time they’re dealing with it,” he said.

Omicron’s spread has rendered border fortifications obsolete and the government is rapidly dismantling them.

First to go were the managed isolation facilities — hotels used to hold returning New Zealanders for two weeks to be sure they weren’t infected before entering the community. Demand for rooms far outstripped supply, leaving tens of thousands of citizens stranded overseas and causing a political headache for the government.

That was to be replaced by a requirement to self-isolate on arrival, but the government quickly scrapped that too, conceding the measure was pointless with the virus running rife.

Now the floodgates are opening. Kiwis in Australia could travel home freely from the end of February, and those in other countries were permitted to enter from March 4.

Ardern has signaled tourists will be allowed to return much sooner than previously indicated, perhaps shortly after the omicron outbreak has peaked, which is expected to happen later this month.

The revival of the tourism industry — the country’s largest export earner before the pandemic — may provide some economic relief, though Robertson cautioned it will take some time for international travel to recover.

There is also optimism that New Zealand’s high vaccination rates leave it well placed to weather the omicron outbreak and dodge the carnage the pandemic has caused in other countries.

More than 95% of people aged 12 and over are fully vaccinated and more than 70% of adults have had a booster shot.

Baker said the fact New Zealand managed to avoid widespread transmission of the virus for so long has been “hugely beneficial to the country.”

“It’s meant that we’ve avoided most of the grim consequences,” he said. “By delaying its entry we’ve been able to get very high vaccine coverage. I think this is probably about the optimal timing that we could manage.” 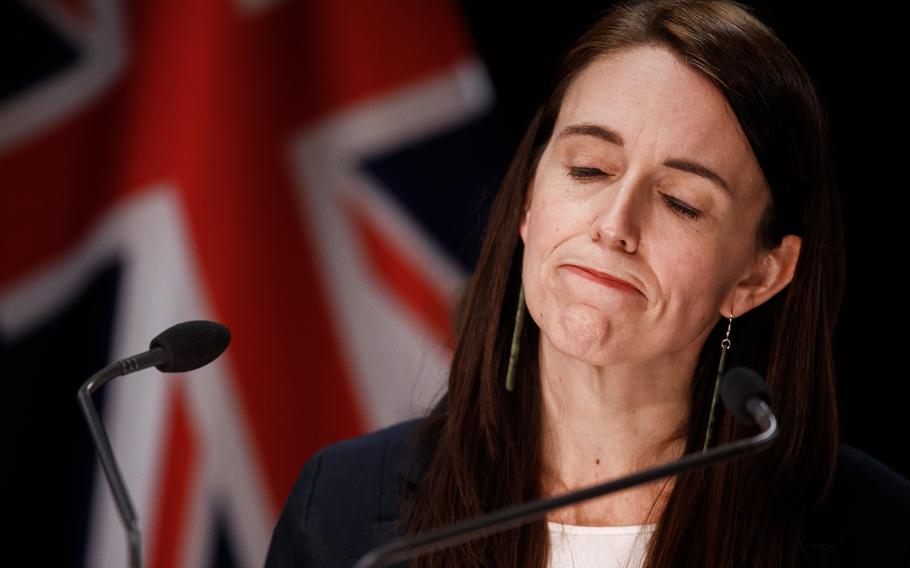