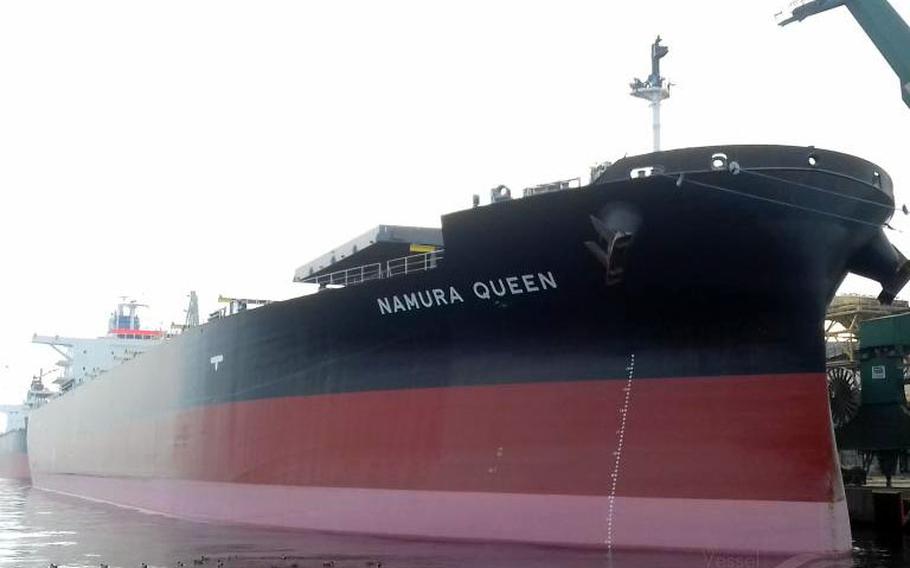 The cargo ship Namura Queen was the second commercial vessel struck by a projectile following the invasion of Ukraine by Russian military forces on Feb. 24, 2022. (Wikimedia Commons)

TOKYO – A Japanese-owned cargo ship is undergoing repairs in Turkey days after a rocket attack in the Black Sea off Ukraine’s coast, according to a cabinet minister in Japan.

One of the 20 Filipino crewmen aboard was injured but the bulk carrier Namura Queen left the area under its own steam after Friday’s attack. The ship is the property of an overseas subsidiary of a Japanese firm but flies a Panamanian flag, Minister of Land, Infrastructure, Transport and Tourism Tetsuo Saito told reporters Tuesday.

Nikko Kisen, a firm based in Ehime prefecture in western Japan, is the ship’s registered owner, according to VesselFinder.com. A company representative declined comment when reached by phone Tuesday by Stars and Stripes.

The vessel is in port at Yalova, Turkey, east of Istanbul on the Sea of Marmara, according to MarineTraffic.com. It was anchored east of Odessa, Ukraine, when the projectile slammed into the aft portion of its superstructure, according to FleetMon.com. Both sites specialize in tracking ships.

Photographs online show a breach in the structure and smoke wafting from the vessel.

In response to the incident, Saito said the ministry alerted the shipping industry and international shipping businesses to secure the safety of their ships in waters near Ukraine.

The Namura Queen was struck while its crew waited to load corn, TV Asahi reported on Saturday.

The ship, built in 2020, was the second commercial vessel struck by a projectile following the invasion of Ukraine by Russian military forces on Feb. 24. The Yasa Jupiter, a Turkish bulk carrier flagged by the Marshall Islands, was struck that day off Odessa and slightly damaged, according to Reuters and Splash247.com.