Laurie Fernandez, a nurse with Navy Medicine Readiness and Training Command at Yokosuka Naval Base, Japan, prepares a COVID-19 vaccine shot at the New Sanno Hotel in Tokyo, Feb. 16, 2022. (Akifumi Ishikawa/Stars and Stripes)

TOKYO — The number of new COVID-19 cases in Japan’s capital city continued its week-over-week slide Thursday, although the day’s total was the highest in six days.

Tokyo confirmed another 17,864 people tested positive for the coronavirus, the ninth consecutive day that number was lower than one week prior, according to public broadcaster NHK and metropolitan government data. NHK reported 24 people had died.

Japan reported 90,885 new cases on Wednesday, according to the Johns Hopkins Coronavirus Resource Center, an increase over the previous day’s 84,158. The seven-day average, however, dipped to 82,681. 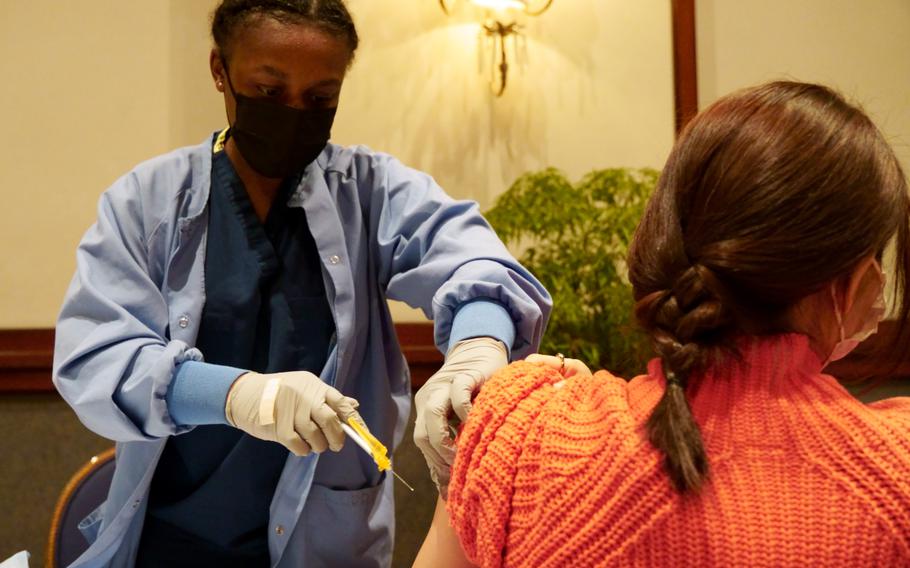 Niyona Gibbs, a nurse with Navy Medicine Readiness and Training Command at Yokosuka Naval Base, Japan, gives a COVID-19 vaccine shot at the New Sanno Hotel in Tokyo, Feb. 16, 2022. (Akifumi Ishikawa/Stars and Stripes)

U.S. Forces Japan on Thursday reported 115 new cases at 13 installations, with four pending confirmation, since its report the previous day. None of the USFJ cases are hospitalized or considered serious. The command reported 81 on Wednesday and 115 on Tuesday.

Kadena Air Base on Okinawa on its website said its active cases were up to 89 on Thursday. According to USFJ, another 11 people had tested positive at Kadena.

Okinawa prefecture reported 702 new cases Thursday, an increase of 42 over Wednesday, according to the prefectural Department of Public Health and Medical Care. It also reported 27 new cases in the U.S. military community.