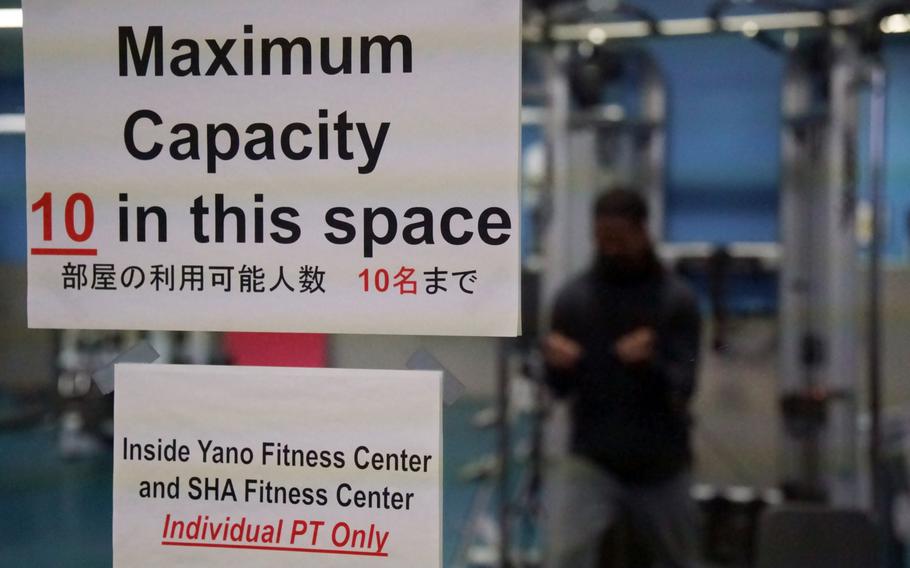 A sign alerts people to capacity restrictions inside a fitness center at Camp Zama, Japan, Feb. 3, 2022. (Akifumi Ishikawa/Stars and Stripes)

Tokyo and other prefectures, including neighboring Kanagawa, home of the U.S. 7th Fleet, asked the central government to extend a quasi-emergency scheduled to end Sunday, according to Kyodo News on Tuesday.

Thirty-four of Japan’s 47 prefectures are under public health restrictions. Quasi-emergency measures encourage bars and restaurants to close early and refrain from alcohol sales, and residents to avoid unnecessary travel.

In Tokyo, the number of severely ill COVID-19 patients surpassed 50 for the first time since October, NHK reported. Still, less than 10% of hospital beds reserved for those patients are filled. But 55% of those set aside for routine coronavirus patients were filled on Monday, according to metro government data.

Japan’s new case numbers fell from 103,038 on Thursday to 92,865 on Tuesday, according to the World Health Organization.

U.S. Forces Japan on Tuesday reported 103 new cases at 15 installations,34 fewer than the previous day, according to its daily update. Yokosuka Naval Base again held the top spot with 61 new cases. Tied for No. 2 were Yokota Air Base and Marine Corps Air Station Iwakuni with nine each.

Thirty-four people at Yokota tested positive between Thursday and Monday, the airlift hub in western Tokyo said on its website Tuesday. The base also serves as USFJ headquarters.

Kadena Air Base on Okinawa reported 123 active cases Tuesday, according to its daily website update.

Okinawa prefecture on Tuesday reported another 682 people had contracted COVID-19, the highest one-day count since 709 on Thursday, according to the prefectural Department of Public Health and Medical Care. The department reported 17 cases from the U.S. military on Okinawa, the fewest in that category since 15 on Jan. 26.

Sasebo Naval Base on Kyushu island has recorded one infection since Monday, according to a post on the base Facebook page. Sasebo has 32 active cases.