Buy Photo
Chris and Yuko Nesbitt run Help Oki, a food bank and thrift shop in Okinawa City. They say they have passed out five times as much food, clothing and other assistance during the coronavirus pandemic as they did before. (Frank Andrews/Stars and Stripes)

OKINAWA CITY, Okinawa — Ask Chris and Yuko Nesbitt how deeply the coronavirus pandemic has struck Okinawa and they’ll answer with one telling statistic.

The couple, who run Help Oki, a food bank and thrift shop in Okinawa City, has passed out five times as much food, clothing and other assistance during the pandemic as they did before.

“Before COVID we’d have maybe two families a week come in,” Chris Nesbitt, a former Marine, told Stars and Stripes on Nov. 23. “Now it’s 10 to 15 cases a week that are asking for help.”

During August and September, the island prefecture with a population of about 144,000 reported the highest per capita rate of COVID-19, the coronavirus respiratory disease, of Japan’s 47 prefectures.

More than 50,340 people there have contracted the disease and nearly 400 have died since March 2020, according to the prefectural Department of Health and Medical Care. In August, the daily number of new cases exceeded 800.

To curb the disease’s spread, the prefectural government declared four separate states of emergency, the last from May 23 to Sept. 30. It urged tourists and young people to stay home, and bars and restaurants to close early and refrain from selling alcoholic beverages – hard measures for an economy that derives 15% of its revenues from tourism.

Nesbitt described how the owner of a Japanese pub came to him for help in 2020. The father of five had lost the business he inherited from his father due to the coronavirus measures. 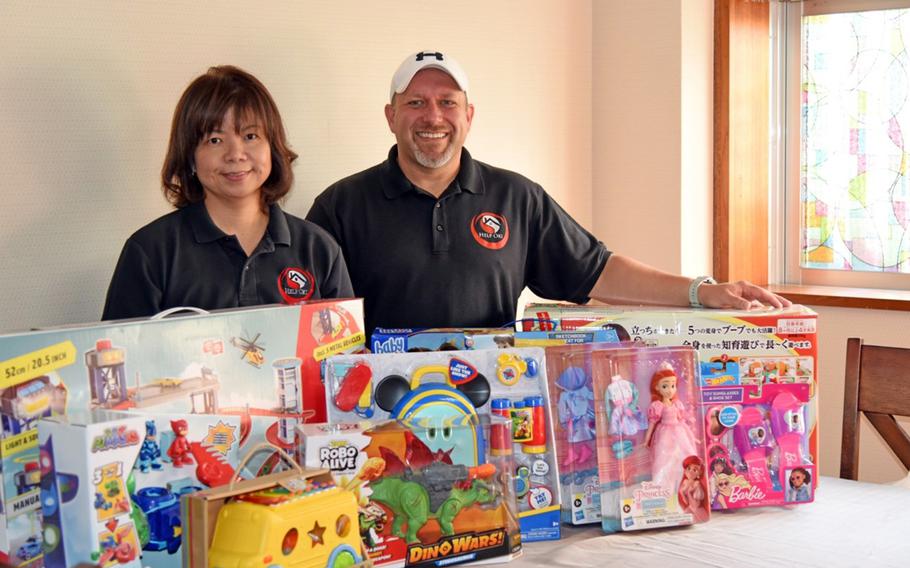 Buy Photo
Chris and Yuko Nesbitt run Help Oki, a food bank and thrift shop in Okinawa City. They say they have passed out five times as much food, clothing and other assistance during the coronavirus pandemic as they did before. (Frank Andrews/Stars and Stripes)

“When he came to get clothing and food from us, he said to me, ‘I never needed help before, but the COVID crisis brought me to this point,” Nesbitt said of the former pub owner, who declined an interview request.

In 2020, 461 businesses on Okinawa closed, an 8.2% increase from the previous year, according to a February report by the credit research company Teikoku Databank Ltd. Nearly a quarter of those businesses, 103, were in the service sector, which employs about 13% of Okinawa’s labor force.

Families suffered as wage earners lost their jobs. More than 35% of Okinawa households with small children experienced a loss of income, according to a survey by the prefectural Department of Child Care and Social Welfare in September and October 2020.

Single-parent households fared particularly poorly. Of those, 13.4% said their income was halved because of the pandemic.

Okinawan social welfare agencies that relied on local businesses for food donations suddenly found themselves in need, Nesbitt said. They, too, turned to Help Oki for food support.

“The amount of food that we are getting out to the community, over a thousand kilograms of food every month,” he said. “Our numbers have just tripled in terms of people coming for support.”

Most of the food and clothing donations that Help Oki distributes come from U.S. service members and their families stationed on the island.

“We are always in need of food. We stock the shelves then next month there is almost nothing in there,” Nesbitt said.

“We do a lot of food drives,” he said. “We ask the American military and Boy Scouts of America in Okinawa – if anybody would like to drop off food during our normal working hours of operation that would be greatly appreciated.”

In November, as the number of new COVID-19 cases fell, Okinawa’s government lifted its requests for shorter business hours and its prohibitions on alcohol sales.

The prefecture reported 17 new cases during the first week in December, and 67% of its population was fully vaccinated as of Nov. 28, according to the Public Health Department.

Economic recovery is underway, but many people on Okinawa still need assistance as winter descends on Japan, Nesbitt said.

“The number of families that are in need – we have seen so many cases,” he said. “I think a lot of families were already on that border of poverty, where they are just kind of maintaining.