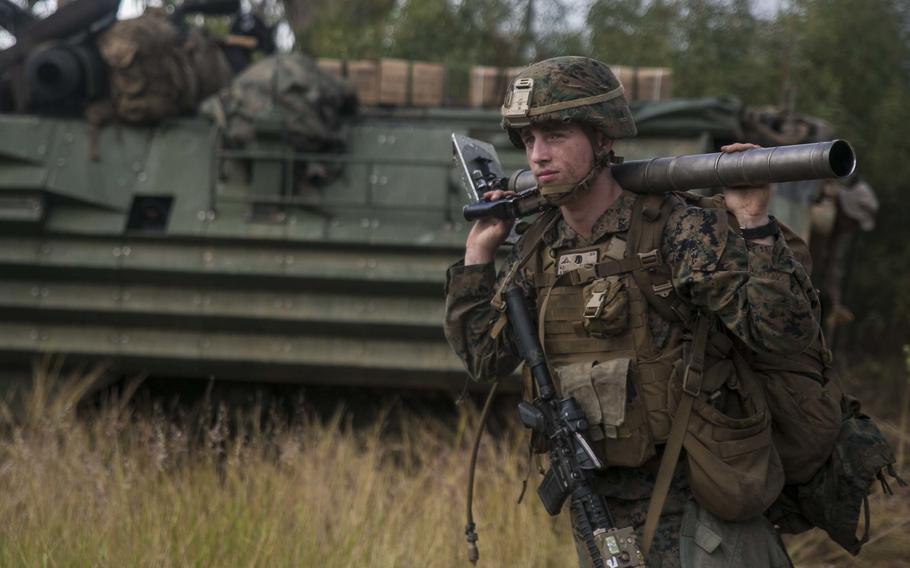 WASHINGTON — More American military resources should be dedicated to Guam and Australia as the United States tries to keep pace with the Chinese military in the Indo-Pacific region, the Pentagon announced Monday after completing its monthslong study of U.S. forces around the world.

The report, known as the Global Posture Review, is designed to help the military decide where to position forces throughout the world and determine whether it “has the correct number of troops in the correct places,” Pentagon officials have said.

The report, which was announced in February, remains classified and was not released publicly. It supports the continued U.S. strategic shift toward the Indo-Pacific region to “deter Chinese military aggression and threats from North Korea,” a senior defense official told reporters at the Pentagon Monday on condition of anonymity.

“Direction from the [review] will strengthen the [Defense Department's] focus on China by reducing posture requirements in other theaters to enable improved warfighting readiness and increase activities in the Indo-Pacific,” the official said.

That concept, nicknamed the “Pacific Pivot” during former President Barack Obama’s administration, was supported in the 2018 National Defense Strategy, which listed China as the “strategic competitor” with the United States because of its rapidly growing military, operations to influence other nations and “predatory economics” used in an attempt to dominate the Indo-Pacific region.

The National Defense Strategy sets the nation’s military priorities and objectives. The Pentagon is now working on an updated version, which acting Deputy Undersecretary of Defense for Policy Mara Karlin said Monday will be influenced by the posture review.

“The results of the Global Posture Review will serve as a disciplining framework for the department to match our posture to our strategy with benefits accruing for years to come,” Karlin told reporters Monday at the Pentagon.

The report calls for “seeking greater regional access for military partnership activities, enhancing infrastructure in Guam and Australia and prioritizing military construction across the Pacific islands,” according to the defense official who spoke anonymously. “We are still developing these issues into fully implementable actions that we can discuss with relevant allies and partners.”

The report will help decide where U.S. forces are positioned during the next two to three years as U.S. leaders consults allies in the region, the official said. The emphasis on expanding efforts in the region might require the U.S. to consult foreign governments on where to station troops.

The official did not discuss specifics, though some U.S. allies in the Pacific have been open to hosting U.S. forces to protect the region from China’s growing influence. For example, the Western Pacific nation of Palau in September 2020 invited the U.S. to build military facilities on the island about 930 miles east of the Philippines.

The review also influenced Austin’s decision to create new rotational aircraft deployments and logistics cooperation in Australia, which he announced during a U.S.-Australia ministerial meeting in September, Karlin said.

A Pentagon task force established in February by President Joe Biden to analyze the department’s efforts to counter China determined four months later that the department’s actions and policies were not living up to its stated counter-China objectives.

The task force urged the department to get its “house in order ensuring that the department lives up to the stated prioritization of China as the No. 1 pacing challenge,” a senior defense official told reporters at the time on condition of anonymity.

At the time, Austin issued a directive to address those issues, but its contents were largely classified.

The posture review also made suggestions for positioning forces to counter threats outside the Indo-Pacific region, including Russia. For example, Karlin said the review helped Biden decide in February to rescind former President Donald Trump’s order to cap the active-duty force in Germany at 25,000 troops.

The review also influenced the Pentagon’s decision in August to keep seven military sites in Belgium and Germany that the U.S. previously planned to return to the host nations under its European infrastructure consolidation plan, Karlin said.

“The Global Posture Review identified additional capabilities that will enhance our deterrence posture in Europe, which we will discuss with allies in the near future,” she said.

In the Middle East, the report assessed “evolving counterterrorism requirements” for the United States following the end of military operations in Afghanistan on Aug. 30, Karlin said.

“The Global Posture Review directs that the DOD posture will continue to support the defeat of [the Islamic State] campaign and building the capacity of our partner forces,” she said.

The report also directed the Pentagon to conduct further analyses of how many troops will be required in the Middle East in the future, Karlin said.

“We have a global responsibility and must ensure the readiness and modernization of our forces,” she said. “These considerations require us to make continuous changes to our Middle East posture, but we always have the capability to rapidly deploy forces to the region based on the threat environment.”

The report also touched on ensuring the U.S. has the proper resources in Africa to support diplomatic efforts and monitor threats from terrorist groups there, Karlin said.

In Central and South America, the review focused on the ability of the U.S. to provide humanitarian assistance, disaster relief and continue its counter-narcotics missions in the region.

“[Austin] is confident that the Global Posture Review sets the department on the right path toward greater strategic alignment in support of the president's national priorities,” Karlin said.