Former US military, diplomatic reps are cautious about formal end to Korean War 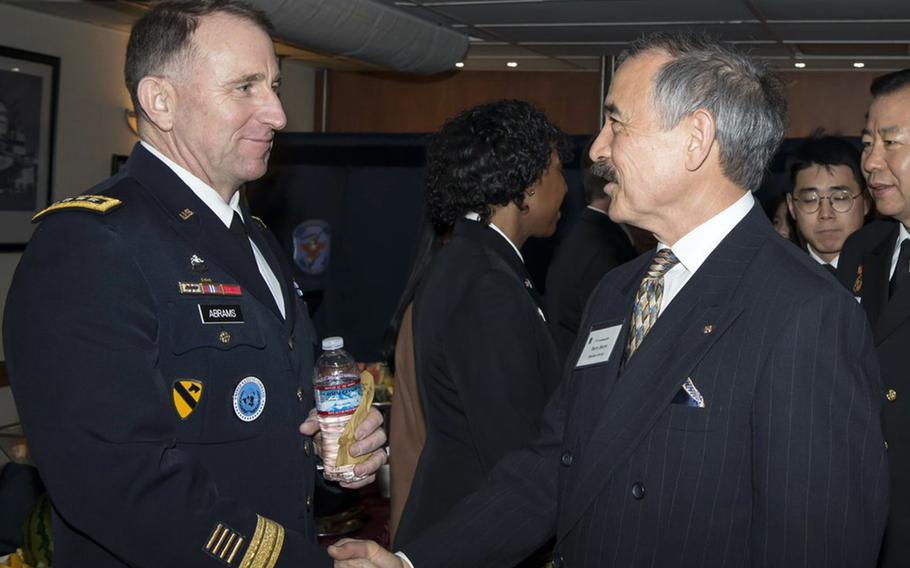 The former U.S. ambassador to South Korea and the retired top commander for U.S. forces in the region said they are cautious about a formal declaration to end the Korean War, a plan championed by the South Korean president as his tenure nears its end.

Former ambassador Harry Harris, a retired admiral who once led U.S. Indo-Pacific Command and the Pacific Fleet, and retired Army Gen. Robert Abrams, the former commander of U.S. Forces Korea, delivered their remarks Wednesday at a panel discussion hosted by The Korea Society in New York.

Harris expressed skepticism over a formal end-of-war declaration and suggested the results may fall short. He urged listeners to ask themselves “what will change the day after that declaration is signed?”

Harris echoed warnings from foreign policy watchers and added “the quest for dialogue” with North Korea must not come at the expense of the ability to respond to its threats.

“We must not relax sanctions or reduce joint military exercises just to get North Korea to come to the negotiating table,” he said. “This is a tried and true road to failure.”

Rather than ending with a peace treaty, fighting from the 1950-53 Korean War ended with an armistice agreement.

South Korean President Moon Jae-in recently renewed his call for the agreement’s signatories to formally end the war. During a speech to the U.N. General Assembly in September, he urged the signatories to “come together and declare that the war on the Korean Peninsula is over.”

Diplomats from Seoul and Washington, D.C., have since discussed the possibility of ending the conflict. Moon’s presidency ends in February and his renewed drive to end the war is viewed as one of the last major policy decisions of his tenure.

Abrams, who led the roughly 28,500 American troops stationed on the Korean Peninsula from 2018 to July 2021, spoke publicly about the U.S. and South Korean alliance for the first time as a private citizen. He reiterated that the concept of an end-of-war declaration has been discussed for many years, and that “we ought to be really careful and proceed deliberately.”

“This is my issue,” he said. “That declaration … is not an end-state or an objective unto itself, but rather a way to achieve that end-state.”

Abrams warned that an end-of-war declaration would be followed by calls to abolish the U.N. Command, the U.S.-led international body that defends South Korea. Such a move, he said, would prompt the dissolution of “the only internationally recognized legal instrument that has prevented the resumption of hostilities.”

Supporters of an end-of-war declaration have said it would rekindle the peace process between the two Koreas. It could lead toward reunification or entice North Korea to join the international community, they say.

The U.S. has not yet clearly defined what the ultimate policy goal for North Korea would be, according to Abrams.

“Is it a peace treaty or is it denuclearization?” he asked. “We haven’t answered that question yet.”