US alliance under Biden more popular with South Koreans than under Trump, poll finds 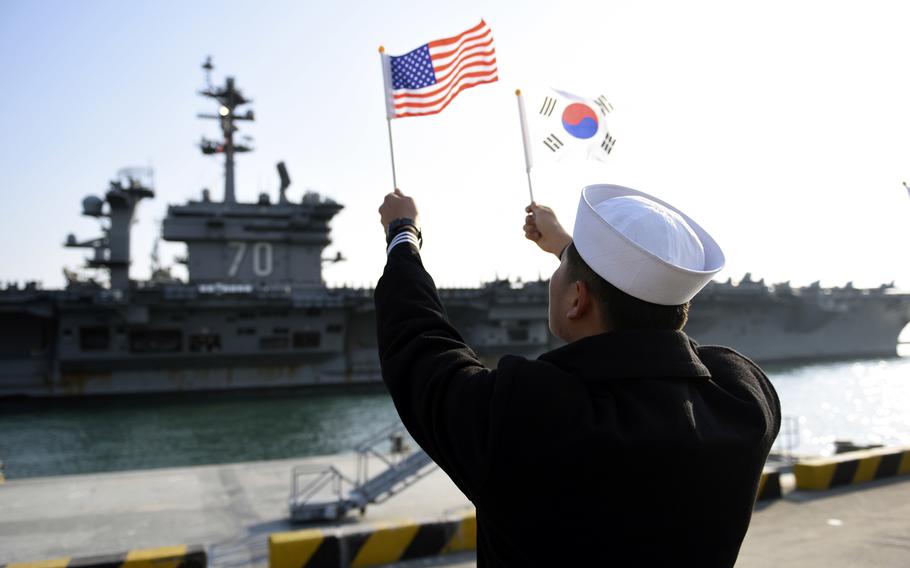 CAMP HUMPHREYS, South Korea — Most South Koreans see the alliance with the United States as stable, a dramatic increase over last year, according to an annual poll from a government-funded think tank.

The Seoul-based Korea Institute for Defense Analysis polled 1,000 South Koreans, 67% of whom view the alliance favorably. The figure represents a “substantial” increase from last year’s 47%, and the two years prior to 2020.

“The relatively low level of stability perceived by the public during these past few years implies that they were concerned about the disharmony between [South Korean President Moon Jae-in] and the Trump administration over North Korea policies,” Hong Sukji, an institute fellow, wrote in her analysis published Tuesday.

Foreign policy analysts questioned the relationship between the two allies during President Donald Trump’s tenure. Trump, who railed against North Korea with threats of “fire and fury” before holding summits with its leader, also criticized the U.S. trade relationship with South Korea and demanded Seoul foot more of the bill for stationing roughly 28,500 American troops on the peninsula.

“In contrast, the sharp improvement in the sense of stability within the alliance suggests that anxiety regarding the [South Korea]-U.S. Alliance is being alleviated due to consistent signaling by the Moon and Biden administration reaffirming their firm relations since the inauguration of the Biden administration in January 2021,” Hong wrote.

Other evidence from the poll suggests more South Koreans believe the U.S. would come to their aid than in previous years. Asked if the U.S. will be “fully committed to the defense of South Korea if there is a military provocation by North Korea,” 77% of respondents said they agreed, compared to 62% last year.

Most respondents also viewed the alliance as a positive force on the peninsula: Nearly 94% said they agreed it is “contributing to the peace and stability of South Korea.”

However, the continued presence of U.S. troops in South Korea in the event of a peace treaty with the North may create mixed feelings, the poll suggests. President Moon, who must step down next year because of term limits, has prioritized a formal end to the 1950-53 Korean War to normalize relations with Pyongyang.

About 35% respondents said U.S. Forces Korea ought to remain in the country, while another 40% said “it should be decided based on the circumstances after the signing of a peace treaty.”

Another 21% said USFK troops “should withdraw.”

The results demonstrate that South Korea’s view of a USFK withdrawal is incumbent “on the circumstances and conditions” of the political climate, rather than merely the passage of a peace treaty, Hong said in her analysis.

Critics have scrutinized Moon’s push to end the Korean War and remain doubtful of substantial changes by North Korea. The communist regime has long lambasted the joint military exercises conducted by the two allies and has called for the immediate withdrawal of U.S. forces from the South.

The defense policy institute’s poll was conducted between Sept. 10 and Oct. 14 and has a 3.1% margin of error.