Only 44% of South Koreans think reunification with the North is necessary, poll says 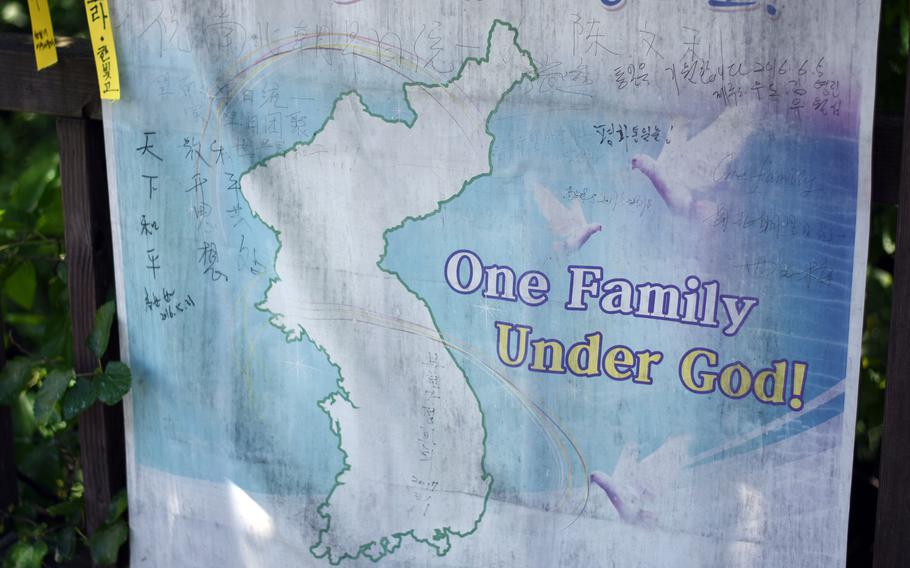 Buy Photo
A reunification banner hangs on a fence near the Demilitarized Zone in Paju, South Korea, May 24, 2017. (Aaron Kidd/Stars and Stripes)

CAMP HUMPHREYS, South Korea — Less than half of South Koreans believe it’s necessary to reunify the war-divided peninsula, the lowest percentage in over a decade, according to a recent poll by Seoul National University.

Roughly 44% of respondents to the survey conducted between July and August said it is at least somewhat necessary for North and South Korea to reunify, said the poll released Tuesday by the university’s Institute for Peace and Unification Studies.

The annual in-person poll surveyed 1,200 people between the ages of 20 and 74 and has a margin of error of 2.8 percentage points.

The figure represents the lowest number of people who believe reunification is necessary since the poll’s inception in 2007. The number of respondents who think it is not essential has been steadily increasing, from around 16 percent in 2018 to 29 percent this year.

The younger generation played a major role in the decline in support, according to university researchers. Nearly 43 percent of respondents between the ages of 20 and 39 said the South does “not really” need to reunify with the North, and 34 percent said the country does not need to “at all.”

The generational divide is unsurprising due to the social changes over the past few decades, said North Korean studies professor Park Wongon of Ewha Womans University in Seoul.

The survey also asked participants the reason for their responses. Roughly 32 percent of those who disfavored reunification cited “economic burdens” imposed by North Korea, the highest percentage among the survey’s choices.

Seoul is expected to absorb much of the costs associated with reunification. Previous government estimates started at $1 trillion, which, according to the World Bank, amounts to over 60 percent of the country’s gross domestic product last year. Former South Korean President Lee Myung-bak called for a “reunification tax” in 2010, but the proposal was abandoned after facing public backlash.

Over 26 percent of the survey’s respondents cited “social problems that can arise after unification,” and 21 percent said they opposed reunification because of differences in the countries’ political systems.

South Koreans are also increasingly pessimistic about the possibility of reunification, the poll said. Roughly 25 percent said they believe it is “impossible” while another quarter think it will happen after 30 years. Only 1.3 percent believed reunification is possible within the next five years.

The two Koreas remain separated after the 1950-53 Korean War, which ended with an armistice agreement rather than a peace treaty. South Korean President Moon Jae-in last month repeated his calls for formally ending the conflict, which senior North Korean official Kim Yo Jong, the sister of leader Kim Jong Un, responded to as a “good idea.”