China has improved the accuracy of its missile force, US Army finds 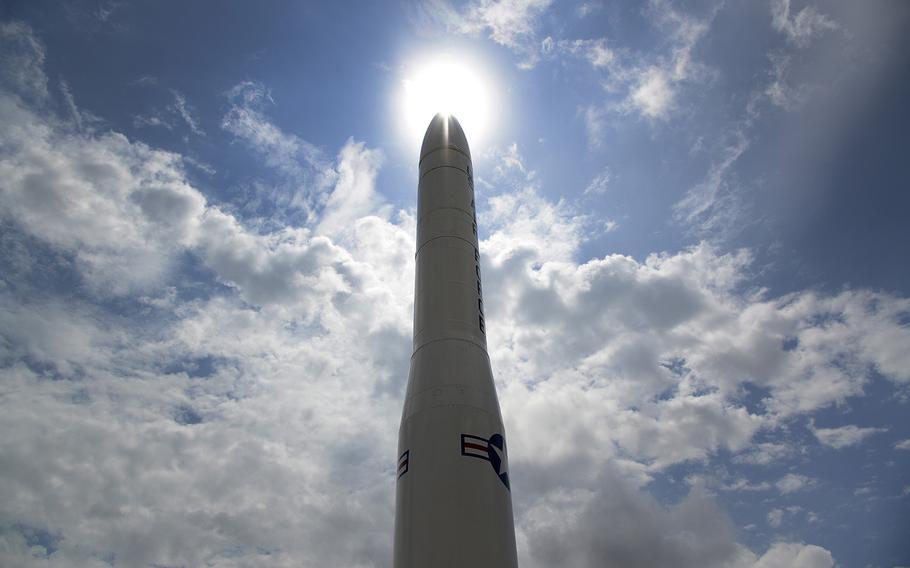 An out of service missile stands as a sculpture at the main gate of Malmstrom Air Force Base in Great Falls, Mont. A new U.S. Army report says the Chinese military has improved the accuracy and range of its ballistic missile force, the world’s largest. (Robert Gauthier, Los Angeles Times/TNS)

WASHINGTON (Tribune News Service) — The Chinese military has improved the accuracy and range of its ballistic missile force, the world’s largest, according to a new U.S. Army report.

The DF-11, the most widely deployed short-range ballistic missile of the People’s Liberation Army Rocket Force, was originally designed to hit targets out to 186 miles, but newer models have expanded ranges beyond 435 miles, according to an Aug. 9 Army publication titled “Chinese Tactics” released Monday by the Federation of American Scientists’ Project on Government Secrecy.

“Accuracy has also increased, reducing” the intended target point to only 32 yards, “giving theater commanders a long-range precision strike capability,” according to the Army publication. The DF-11 can employ both conventional and nuclear warheads. The “solid-fuel rocket and mobile transporter-erector-launchers enable rapid launch and reload operations,” it added.

The U.S. Army is attempting to reshape its forces from their 20-year emphasis on counterinsurgency to focus on an Indo-Pacific presence geared toward countering China in coordination with the Air Force and Navy. The new publication presents a menu of the longer-range and more accurate Chinese missiles that U.S. forces and Taiwan would face in a conflict.

In addition, the newer DF-15/16 missile has ranges of 600 kilometers to 1,000 kilometers and “they employ advanced antiballistic missile countermeasures such as terminal maneuvers and decoys,” the Army publication says. “Early variants were not accurate enough for precision strikes,” but newer models are much improved. “These missiles can employ nuclear or conventional warheads, and have a significantly larger payload” than most short-range ballistic missiles.

The publication, which also covers many other Chinese military capabilities, is the latest to portray the military might of a nation U.S. leaders consider the prime threat driving U.S. strategic planning and spending.