US still a ‘global leader,’ Harris says on Asia trip, as allies fret over China 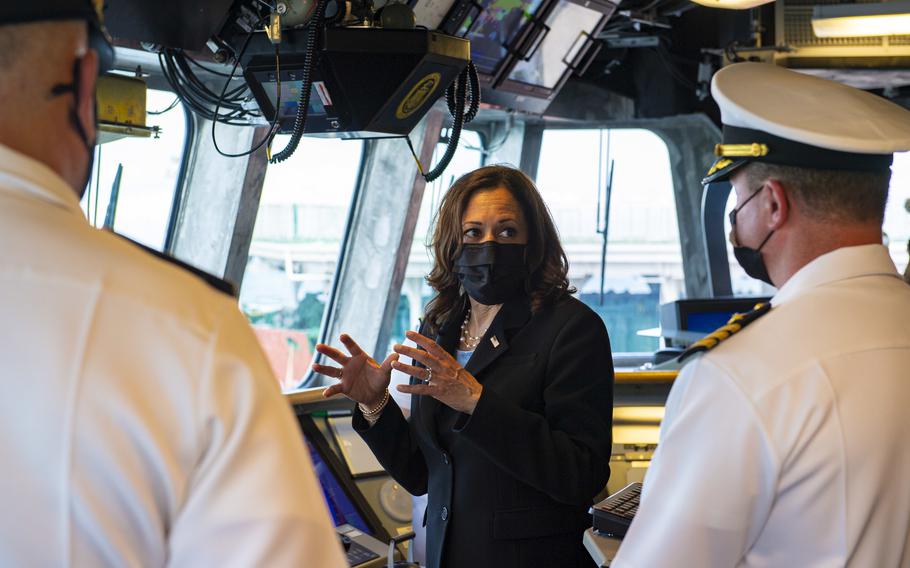 Vice President Kamala Harris visits the Independence-variant littoral combat ship USS Tulsa (LCS 16), Aug. 23, 2021. Tulsa, part of Destroyer Squadron Seven, is on a rotational deployment in the U.S. 7th Fleet area of operation to enhance interoperability with partners and serve as a ready-response force in support of a free and open Indo-Pacific region. (Richard Cho/U.S. Navy)

Successive U.S. administrations have pledged to pivot away from unending military entanglements and focus American foreign policy on the Indo-Pacific, where a string of nations are anxious about China's growing military clout and hungry for U.S. engagement.

A question facing the Biden administration is how far it will be able to do that — and maintain credibility among U.S. allies alarmed by the collapse of the U.S.-backed government in Afghanistan and with fresh memories of chaotic diplomacy under President Donald Trump. Vice President Kamala Harris's visit to Singapore and Vietnam this week, only her second foray internationally, is emerging as a test of Washington's ability not just to lead but counter an increasingly aggressive Beijing.

"The current narrative now is that America is withdrawing, which puts even more pressure on her trip," said Huong Le Thu, a nonresident fellow with the Southeast Asia Program at the Center for Strategic and International Studies. "[The United States] needs a win."

Harris's visit officially began Monday, when she met Singapore Prime Minister Lee Hsien Loong. In a bilateral meeting that lasted more than an hour, the two discussed issues including deepening economic engagement, shoring up supply chains, the launch of a new climate partnership between the United States and Singapore, and expanded cybersecurity cooperation.

"The reason I am here is because the United States is a global leader, and we take that role seriously," Harris said in a joint news conference with Lee. The initiatives, Harris added, "speak, I believe, volumes in terms of the integrity of the relationships the United States has around the world."

Harris on Tuesday is scheduled to deliver a speech on Washington's Indo-Pacific policy. A senior administration official, speaking to reporters ahead of Harris's meetings on Monday, said Southeast Asia "was important before recent developments in Afghanistan; it's important now, and it's going to remain important, as is the broader Indo-Pacific."

"We're pursuing the deepening of these partnerships for economic and security interests, and global health interests, and much more," the official said.

Singapore was one of the countries that deployed personnel to Afghanistan since 2007 as part of the International Security Assistance Force, withdrawing these forces in 2013. Vietnam, the second stop on Harris's trip, has obvious echoes of the messy withdrawal from Afghanistan but has grown closer to the United States out of shared concerns over China's actions in the South China Sea. (Vietnam fought a war with China in 1979 and has overlapping maritime claims with Beijing.)

China's state media, which has mocked the United States over the chaotic events in Afghanistan, noted that Harris's visit came at an "embarrassing" time.

"The U.S.'s hasty withdrawal from Afghanistan has triggered changes in the country's situation. This is creating a crisis of confidence among U.S. allies and partners," Zhang Tengjun, assistant research fellow at the China Institute of International Studies, wrote in the Global Times.

Both countries on Harris' itinerary are looking for firm and tangible commitments from the vice president, analysts say, particularly deeper economic commitment and, in Vietnam's case, stronger defense ties.

Harris on Monday also visited Changi Naval Base and toured the USS Tulsa, a littoral combat ship, where she spoke to American sailors on board, thanking them for their service and acknowledging the emotion they must feel watching the events unfold in Afghanistan.

"At the same time, other missions continue all around the world," she added. "So you all are here in Singapore, and Southeast Asia, and the Indo Pacific, with the mission of your own, a mission that is vital to the American people."

Singapore grants the United States access to its military facilities and is an anchor for American naval presence in the region. This, however, is not a permanent base, with Singapore treading carefully in its relationships with the United States and China.

Some of the partnerships announced Monday in Singapore came without a specific start date, or were nonbinding memorandums of understanding. Chong Ja Ian, a political scientist at the National University of Singapore who studies U.S.-China competition in the region, said the developments were "incremental."

Pledges to work together on climate change and supply chains "sound nice, but it's the substance rather than the sticker and packaging that matters, especially at this moment," he said. "Think about the promises made to Afghanistan from last year."

The two leaders also discussed Myanmar, where more than 1,000 people have been killed by security forces since the military seized power in a coup Feb. 1. In the news conference, Harris said the United States wanted to see democracy restored in Myanmar.

Neither Harris nor Lee provided details or specifics on how their countries would address the situation in Myanmar, which has deteriorated into a major humanitarian crisis that could destabilize the region, already wrecked by the pandemic.

Lee, in response to questions from reporters, pushed back on the idea that the United States has become an unreliable partner. He said that his country as an ally would be deploying a multi-role tanker transport plane to help in the mission to evacuate Afghan citizens.

Countries "have to adjust their position from time to time," Lee said. "Sometimes it can be done smoothly, sometimes there are hiccups, sometimes things go awry and take time to put right."

Still, he added, "Singapore hopes and works on the basis that the U.S. will continue to . . . engage with the region for many more years to come."

Analysts, though, note the Biden administration's repeated indications that its priorities are domestic, which also colors the actions in Afghanistan. The success of the trip, Chong said, will rest on Harris's ability to prove Washington has the "political will and resources" to follow through on statements and announcements.

"Regional allies, partners and even rivals need to be convinced that the United States is able to devote time, energy, resources and attention to Asia, even as it tries to get its own house in order," he said.