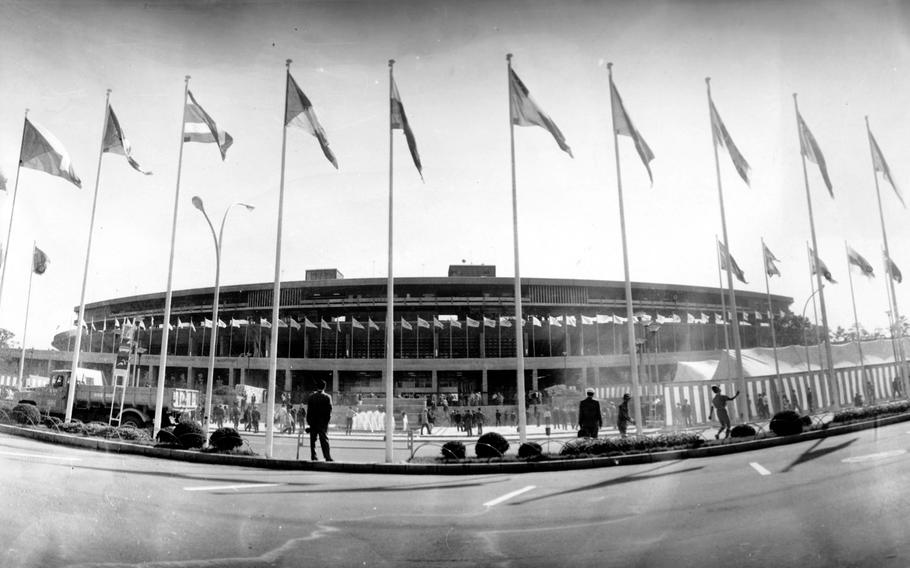 Buy Photo
Emperor Hirohito led 72,000 people packed into National Stadium in cheering 7,000 young athletes as they marched into the arena for the Tokyo Olympics' opening ceremony on Oct. 10, 1964. (Stars and Stripes)

TOKYO — Emperor Hirohito led a crowd of 72,000 people packed into Japan’s National Stadium in cheering 7,000 young athletes as they marched into the arena for the Olympic opening ceremonies on Oct. 10, 1964.

“Tokyo Lights the Olympic Flame” was the front-page headline in Pacific Stars and Stripes the next morning announcing the start of the first games to be held in Asia.

“Guns sounded, 10,000 gaily colored balloons were released, and pigeons fluttered around the stadium after the athletes gathered before the crowd,” the newspaper reported. “The Olympic flame … was ignited by a torch brought from Mount Olympus in Greece.” 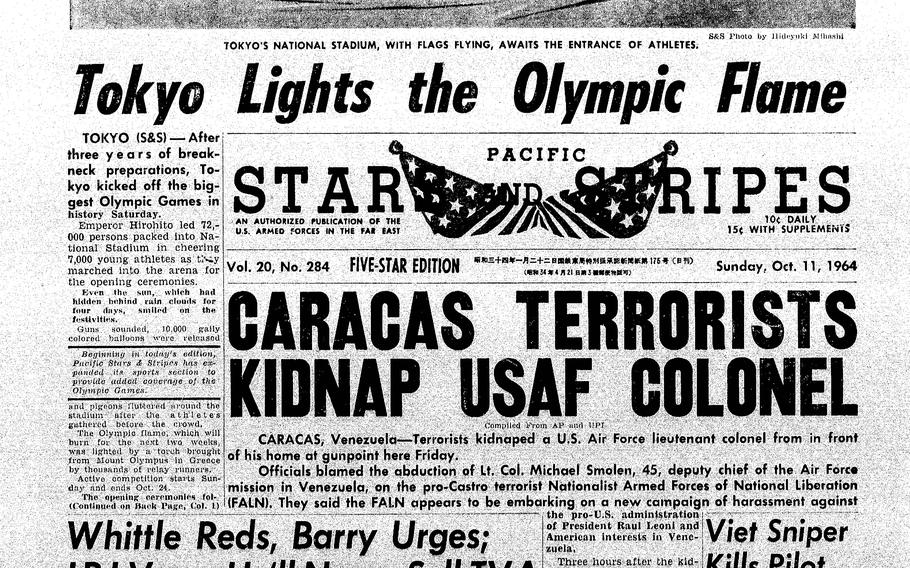 The “biggest Olympic Games in history” began after “three years of break-neck preparations” that saw Japan’s once war-torn capital transformed into a modern wonder with newly built skyscrapers, elevated expressways and the country’s first bullet train, which began operating the month of the games.

But the Olympics was also held with Cold War tensions at a fever pitch as the Russians vied with the West for nuclear and space supremacy and communist insurgencies threatened to topple Southeast Asian nations like dominoes.

“US Wins Its 1st Gold Medal,” Stars and Stripes announced in a front-page on Oct. 14, but that news was overshadowed by the lead story: “Historic First – 3 MEN IN SPACESHIP; ORBITED BY SOVIETS”

At the Olympic Village in Tokyo, “a billboard went up under the hammer and sickle flag over the Russian headquarters … charting, in Russian, the Soviet Union’s medal scores for the last three Olympics and their target for the 18th Olympiad here,” The Associated Press reported Oct. 16.

The billboard, which showed Russia targeting a record 210 medals at the games — 39 more than the United States won in Rome four years earlier — was removed after a Russian-speaking American reporter was spotted jotting down the information, according to the story.

That same day AP reported that capitalist Coca-Cola and Pepsi were being served on three huge Soviet ships moored in Tokyo Bay as floating hotels for Russian and Eastern European visitors to the Olympics. 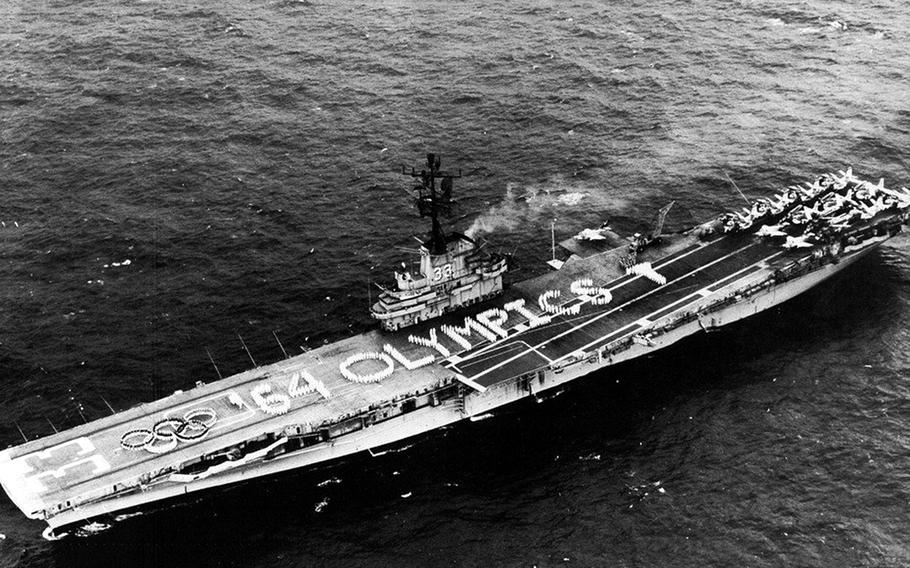 In the Oct. 17, 1964, edition reporting the overthrow of Soviet leader Nikita Khrushchev, Stars and Stripes ran this aerial photograph of the USS Kearsarge cruising in the South China Sea while its crew paraded on deck forming the Olympic rings and the message “64 OLYMPICS.” (U.S. Navy)

Soviet leader Nikita Khrushchev was overthrown midway through the games. In the Oct. 17 edition reporting his ouster, Stars and Stripes ran an aerial photograph of the USS Kearsarge cruising in the South China Sea while its crew paraded on deck forming the Olympic rings and the message “64 OLYMPICS.”

Along with the Olympics, newspapers during the games were also full of reports on the fighting in Vietnam.

James Pickerell, a former Navy and Stars and Stripes photographer, was shot by the Viet Cong while working as a freelancer, becoming the first newsman to be wounded in the conflict, according to an Oct. 21 UPI report. 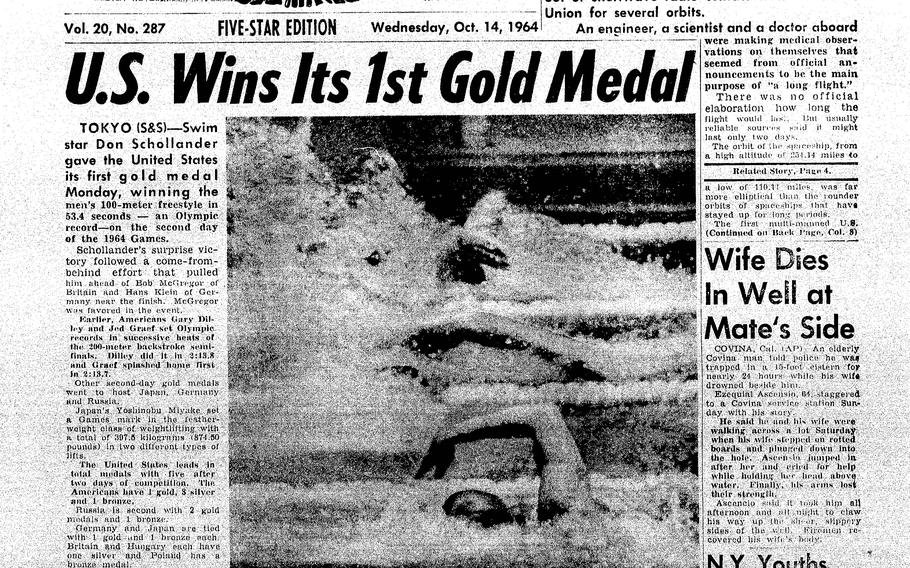 The same day, sportswriter Staff Sgt. Dick Kelly wrote of U.S. games athletes: “Wearing their cowboy hats they were easy to spot. You could find them dancing in the International Club, trying on Oriental clothes in the (Olympic) Village stores and enjoying the favorite pastime here of girl watching.”

Kelly interviewed Army Sgt. Mel Pender at the hospital on the now-closed Tachikawa Air Base in Tokyo for an Oct. 20 story. Pender ran the semi-final and final of the 100 meters with a torn abdominal muscle.

He placed sixth and collapsed after the race, won in a record 10.06 seconds by teammate Bob “The Bullet” Hayes. But Pender still wanted to compete in the 400-meter relay, according to the story.

“I promised my wife and daughter I’d bring them home a gold medal,” he told Kelly. “If there would have been more time between the semi-finals and the finals of the 100, I think I could have won it.”

Pender was too injured to compete again in Tokyo but, after the games, he became an officer and was awarded a Bronze Star in Vietnam. He went on to win relay gold at the 1968 games in Mexico City.

She recalled, during a July 9 phone interview, putting on a smart uniform, translating for an army of international press and building up an impressive collection of Olympic pins.

Cooper saw the finish of the marathon, won by Abebe Bikila of Ethiopia, who had raced to gold in bare feet four years earlier in Rome.

“I didn't get to see too many other games because of my job, but I really wanted to see this famous runner,” she said. “It was a once in a lifetime type thing, you know. I can still hear the roaring cheers that covered the big stadium.” 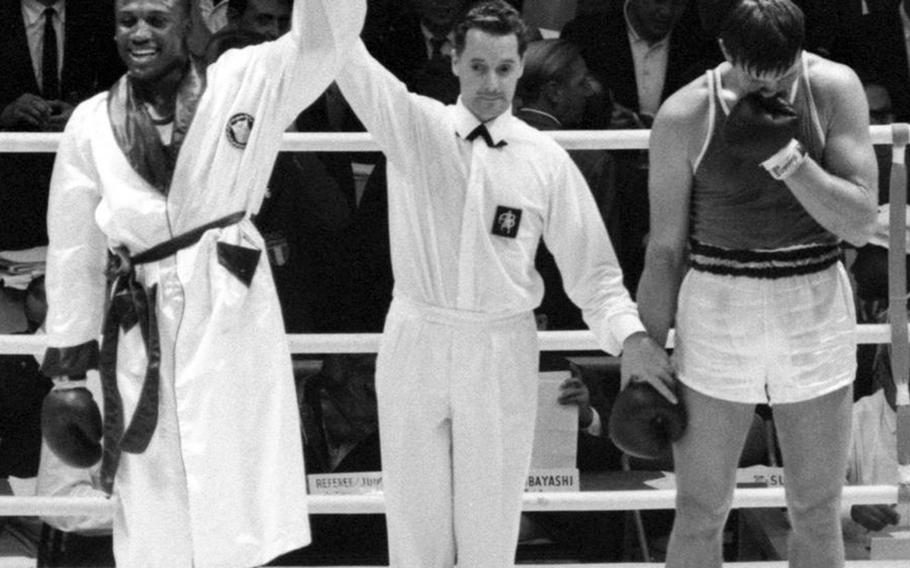 Buy Photo
Joe Frazier of the United States is declared the winner over Vadim Yemelyanov of the Soviet Union during the heavyweight boxing semifinals at the 1964 Olympic Games in Tokyo. Frazier went on to win the gold medal. (Stars and Stripes)

‘The crowd is everything’

Masahiko Nakamura, 87, a Stars and Stripes photographer at the games, recalled the throngs of cheering people who lined the marathon route.

“Everywhere there were big crowds,” he said in a July 12 phone interview.

The 1964 Olympics were the first broadcast in color and the first beamed to Americans by satellite. Nakamura said he bought his first color television to watch the events.

Mike Mealey, 81, of Park City, Utah, reported on the ’64 games as a 23-year-old private first class after he was drafted into the Army.

Stars and Stripes sent the former Oakland Tribune reporter to work as a combat correspondent in Vietnam, but he was back in Tokyo for the Olympics, he recalled in a July 12 telephone interview.

“The Japanese were the Japanese,” he said of the games’ organizers. “They did everything to the nth degree. They did a beautiful games.”

Mealey covered events ranging from swimming to athletics, boxing and judo. A highlight was sitting in a press box next to Jesse Owens, a four-time gold medalist in track and field from the 1936 Berlin Olympics, he recalled.

At each event enthusiastic locals were important part of the action, Mealey said.

“It’s going to be strange with no spectators (this year), because the crowd is everything,” he said.