The Royal Navy plans to bolster its Pacific presence with a visit to Japan by the U.K. Carrier Strike Group and by permanently assigning two offshore patrol vessels in the region later this year.

U.K. Secretary of State for Defence Secretary Ben Wallace met with a variety of U.S. and Japanese officials this week, including Adm. John Aquilino, head of U.S. Indo-Pacific Command, and Japanese Prime Minister Yoshihide Suga, according to a press release Monday from the U.K. Ministry of Defence.

“As we witness a tilt in power towards the Indo-Pacific region, we are committed to working with our partners here to defend democratic values, tackle shared threats and keep our nations safe,” Wallace said in the release.

The British Embassy in Tokyo announced on Tuesday that elements of the U.K. strike group would be visiting ports in Sasebo, Okinawa, Kure, Yokosuka and Maizuru.

“Following exercises with the Japan Maritime Self-Defense Force in the Gulf of Aden and in the waters off Japan, the upcoming visit of the U.K.-led Carrier Strike Group to five ports across the country is a clear demonstration of our commitment to maintaining regional security and upholding the rules-based international order with Japan,” Wallace said in the Tuesday release. 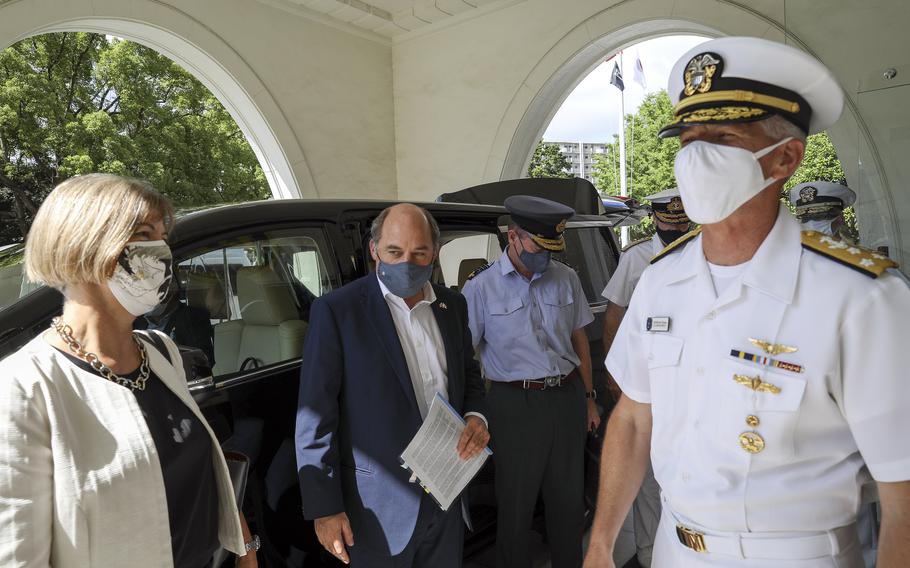 The British Embassy also announced that the U.K. plans to permanently station two offshore patrol vessels in the Indo-Pacific region later this year, and eventually contribute a littoral response group in “the coming years,” according to the press release.

A Royal Navy spokesperson could not be reached for comment Wednesday.

“The UK’s defense relationship with Japan is the closest it has been in the last century,” Wallace said in the press release.

The Ministry of Defence said Monday the U.K. strike group, led by the aircraft carrier HMS Queen Elizabeth, will take part in exercises in the Philippine Sea in August alongside the U.S., Australia, France, Japan New Zealand and South Korea.

The Queen Elizabeth would operate in conjunction with a “U.S. Carrier Strike Group,” although the Defence Ministry did not identify which U.S. carrier group would participate.

A spokeswoman for the U.S. Navy’s 7th Fleet, Cmdr. Hayley Sims, referred questions regarding the Queen Elizabeth and the exercises to U.S. Indo-Pacific Command, which was not immediately available for comment Wednesday.

The ministry said training would include anti-submarine exercises and aircraft exercises that would, when combined with a U.S. carrier strike group, represent “the largest concentration of F-35 jets anywhere in the world.”

The news comes a little over a week after the Queen Elizabeth, which is on its maiden deployment, conducted a large-scale exercise in the Gulf of Aden on July 12 with the USS Ronald Reagan strike group, the Dutch frigate HNLMS Eversten and the amphibious assault group lead by USS Iwo Jima.

The BBC reported 100 cases of COVID-19 aboard ships of the U.K. Carrier Strike Group on July 14, including on the Queen Elizabeth.