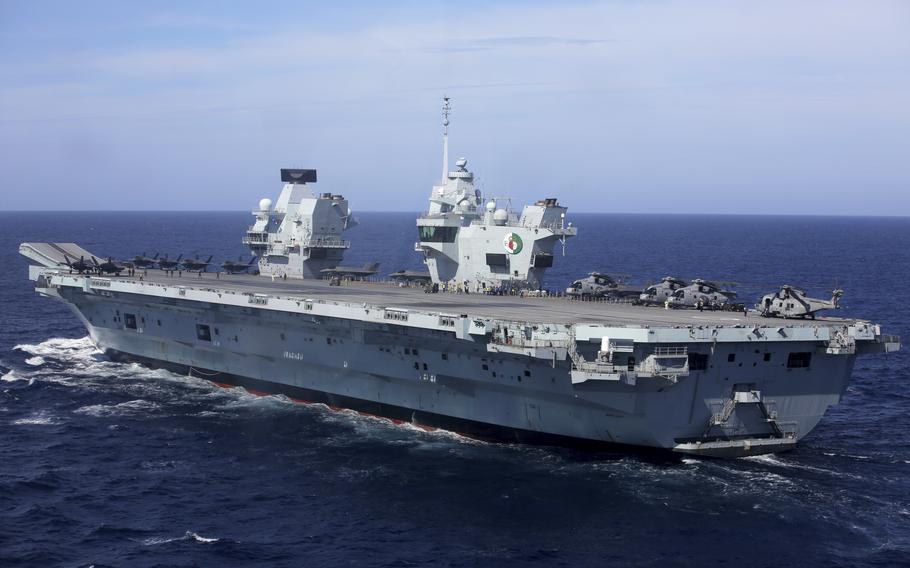 Military personnel participate in a NATO training exercise on board the aircraft carrier HMS Queen Elizabeth off the coast of Portugal on May 27, 2021. (Ana Brigida/AP)

British defense secretary Ben Wallace said the visit by the Royal Navy's largest warship is part of his country's "Indo-Pacific tilt" that shares goals with Japan.

"Both our countries seek to protect and uphold the rules-based international order," Wallace said at a joint news conference after meeting with his Japanese counterpart, Nobuo Kishi.

Japan has been seeking to expand and deepen security ties with other nations in addition to its chief ally, the United States, as China presses its claims to contested areas in the South China Sea and to the Japanese-controlled Senkaku islands, which China also claims and calls Diaoyu.

Tokyo has been strengthening ties with Britain, Australia, France and Southeast Asian countries.

Kishi said Britain is an important partner in addressing the joint challenges they face in the Indo-Pacific region. "We confirmed our shared position in strongly opposing unilateral attempts using force to change the status quo in the East and South China Seas," Kishi said.

The Royal Navy strike group left home in May as part of Britain's increased involvement in the Indo-Pacific region.

Wallace said it is the duty of the two like-minded countries "to protect those that are unable to protect themselves from adversaries that will threaten them."