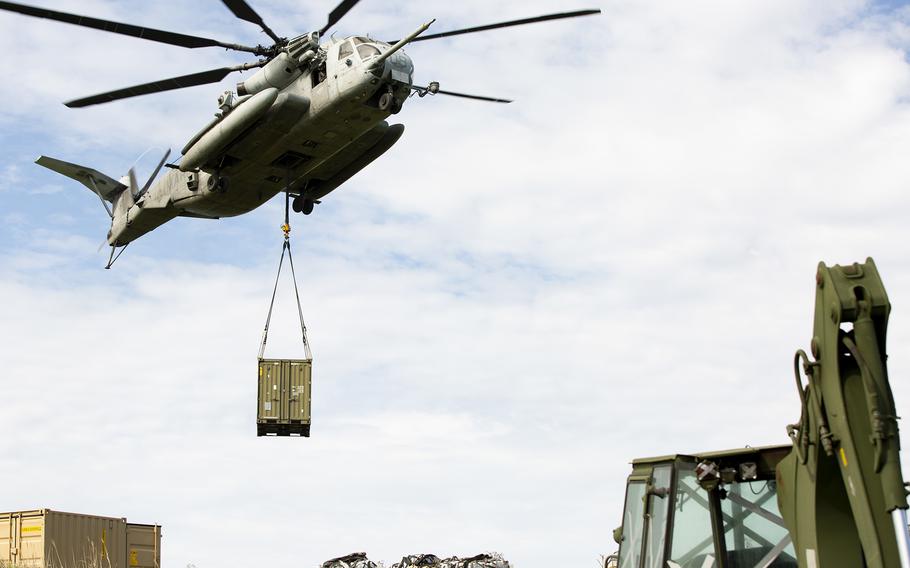 CAMP FOSTER, Okinawa — The Marine Corps is investigating what caused a steel shipping container to fall from a heavy-lift helicopter into the sea Tuesday off the western coast of Okinawa.

The Tri-Con container — 8 feet long, 6 ½ feet wide and 8 feet tall — fell from a CH-53E Super Stallion around 12:30 p.m. between Irisuna and Tonaki islands, according to a statement Tuesday from the 1st Marine Aircraft Wing.

“1st MAW takes all aviation related events seriously and will conduct a thorough review to determine the cause of the incident,” the statement said.

The helicopter was returning from an exercise at military ranges on Irisuna at the time. No injuries resulted from the incident, according to a report Wednesday by The Okinawa Times, which cited the Okinawa Defense Bureau.

The Marines are assessing whether they can salvage the container, whose depth is unknown, wing spokesman Maj. Ken Kunze wrote in an email to Stars and Stripes on Wednesday.

An empty Tri-Con container of that size weighs 2,600 pounds, according to oceancontainer.com.

The container held tools, Meals, Ready to Eat and less than 3 gallons of fuel in a sealed vessel and was on its way to a beach landing zone on the Army base Torii Station in Yomitan, Kunze said.

The contents were used in Poseidon’s Watchtower 21, an exercise in expeditionary advanced base operations by the 3rd Marine Logistics Group and Seabees from Naval Mobile Construction Battalion 4 that started June 2 and concluded June 17.

Expeditionary advanced base operations is a relatively new concept that calls for Marines to move inside the range of an adversary’s “long-range precision fires” and establish difficult-to-target forward bases.

“Objects falling from the sky is something that does not happen in an ordinary living environment,” Tonaki village Mayor Suguru Tobaru said, according to Okinawa Times. “The villagers and fishermen must be worried.”

This is at least the third incident involving objects falling from Marine Corps aircraft at Okinawa since late 2017.

On Aug. 27, 2019, a Super Stallion lost a cabin window over open water off the Okinawa coast. No injuries or property damage were reported.

In December 2017, a window fell from a Super Stallion and landed on an elementary school sports field near Marine Corps Air Station Futenma’s fence line. More than 50 children were playing nearby at the time.