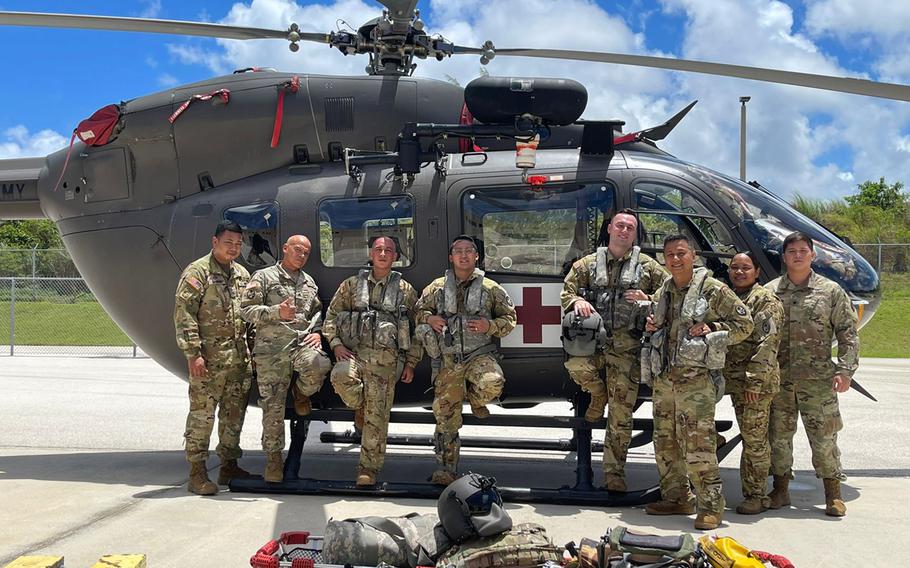 A service member left behind by his hiking party was rescued over the weekend by a Guam National Guard helicopter crew near Mount Lamlam in the island’s southern interior.

First responders found nine lost hikers, all active-duty military from an unspecified service branch, just after 11 p.m. Those hikers left the trail on their own and returned to their barracks, Chargualaf said.

The hikers called firefighters again around 1 a.m. Sunday, saying there had, in fact, been 10 of them and one service member, a 38-year-old male, had been left behind in the woods, Chargualaf said. She said the hikers were all recent arrivals on the island.

“They were all fairly new to each other,” Chargualaf said. “They weren’t actually friends, more acquaintances.”

Firefighters searched through the night, Chargualaf said. The National Guard aviation detachment was called at about 10 a.m. Sunday to assist.

The hiker was found several miles away, near the Fena Valley Reservoir, by a UH-72 Lakota helicopter and its seven-person crew shortly before 11 a.m., according to Chargualaf and a guard news release on Sunday. The man, exhausted and dehydrated, was hoisted aboard and flown to U.S. Naval Hospital Guam where he was admitted for observation.

Chargualaf called the incident “strange,” due to the hikers not knowing how many members of their own party there were.

“This is what we train for— this is why we’re here,” Detachment 2 commander Maj. Michael Chen, D Company, 1st-224th Aviation Regiment Medevac Unit, said in the guard’s statement.

“We’re all just glad and relieved the hiker is OK. Executing a quick response like this can make the difference, and thanks to the professionalism of our civilian lead agency, in this case GFD, that’s exactly what happened.”