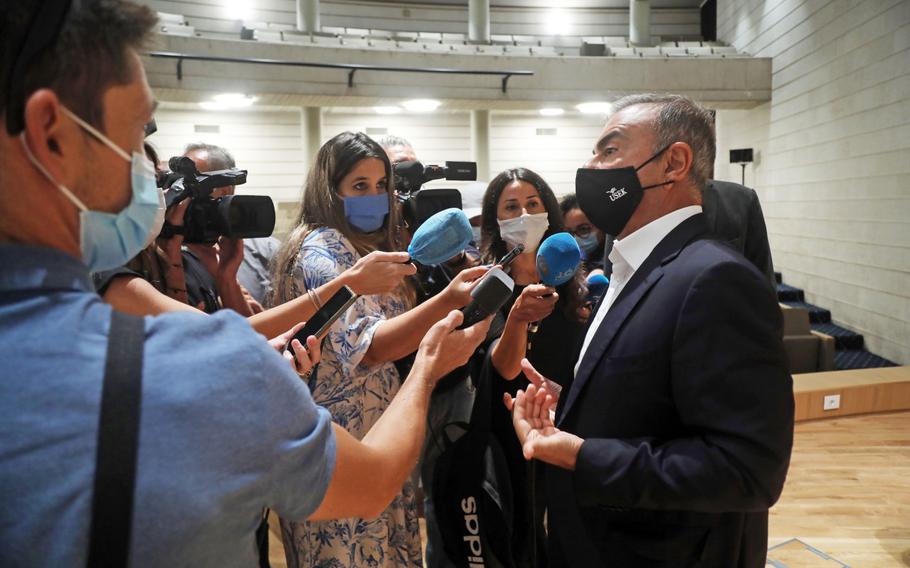 Helping Carlos Ghosn escape trial in Japan was a mistake, one that they deeply regret, said the Americans who helped the former Nissan chairman flee the nation to safety in Lebanon.

"I helped Carlos Ghosn escape Japan while he was on bail," Michael Taylor said on Tuesday, his voice quavering. It was the first time he spoke at length in court. "I deeply regret my actions and sincerely apologize for causing difficulties for the judicial process and for the Japanese people."

At a hearing two weeks ago, Michael and his son Peter agreed with assertions by prosecutors that they helped Ghosn escape the country at the end of 2019. They were extradited to Japan from the U.S. earlier this year, and face a maximum of three years in prison on charges of harboring or enabling the escape of a criminal.

"After more than 400 days in jail, I have had a lot of time to reflect," Peter Taylor said. Both stood and bowed deeply after making their statements. "I take all responsibility and deeply regret my actions."

The pair, dressed in dark suits and white shirts, arrived in handcuffs, flanked by guards. Michael Taylor was questioned by his attorney for about 18 minutes, followed by questioning by one of the prosecutors. He described how he came to learn that Ghosn wanted to escape, and that Ghosn's cousin was his wife's sister-in-law, who pressed him to help the former auto executive.

The Taylors' case in Tokyo is the latest addition to multiple legal proceedings around the world left in Ghosn's wake. Former Nissan director Greg Kelly is currently standing trial in Tokyo for allegedly helping to understate Ghosn's compensation and Nissan is suing Ghosn for 10 billion yen ($95 million) in damages in a separate suit that is proceeding slowly in Yokohama. French investigators have been questioning Ghosn in Beirut on accusations he siphoned Renault funds, and last month the former executive was ordered to pay almost 5 million euros ($6 million) to a local unit of Nissan in a case in the Netherlands.

The Taylors were brought to Japan in March to face charges related to their involvement in Ghosn's escape from Japan, where he was facing charges of financial misconduct. After concealing himself in a case for audio equipment and being smuggled aboard a private jet, the former auto executive made his way to Beirut, where he currently resides.

A former Green Beret, Michael has never denied his involvement in Ghosn's escape, even describing how he executed the operation in an interview with Vanity Fair before he was arrested. A longtime security consultant, Michael said he had been planning the operation for months, though he had maintained that Peter had no role.

By pleading guilty and showing remorse, the Taylors appear to be seeking a speedy sentencing and reduced sentence. They've already served time in the U.S. although it's not clear whether that will be factored into their sentencing in Japan.

The State Department said it would inform the Japanese government of the amount of time the Taylors had served so that it could be taken into account, according to a letter seen by Bloomberg News. Their sentencing is set to take place later in July.

Michael Taylor said that he arrived in Japan on Dec. 29, 2019, for a "dry run" but that Ghosn had decided, after seeing the large music box, to make a run for it that same day. There was also an alternate plan to escape Japan by ship, Taylor said.

"They told me that the charges should not have been brought, and that bail jumping wasn't a crime," Taylor said in response to questions by the prosecutor. "They told me that he would be here for 10 to 15 years and so he would probably die here.

Peter Taylor gave more detail about his family's connections to Ghosn, who asked him in July 2019 to do some work for him to on digital documentaries and reputation-related work. Peter testified that he received $862,500 for his services and also for his father's work for Ghosn.