Despite danger and cost, Japan gambles on successful Olympics 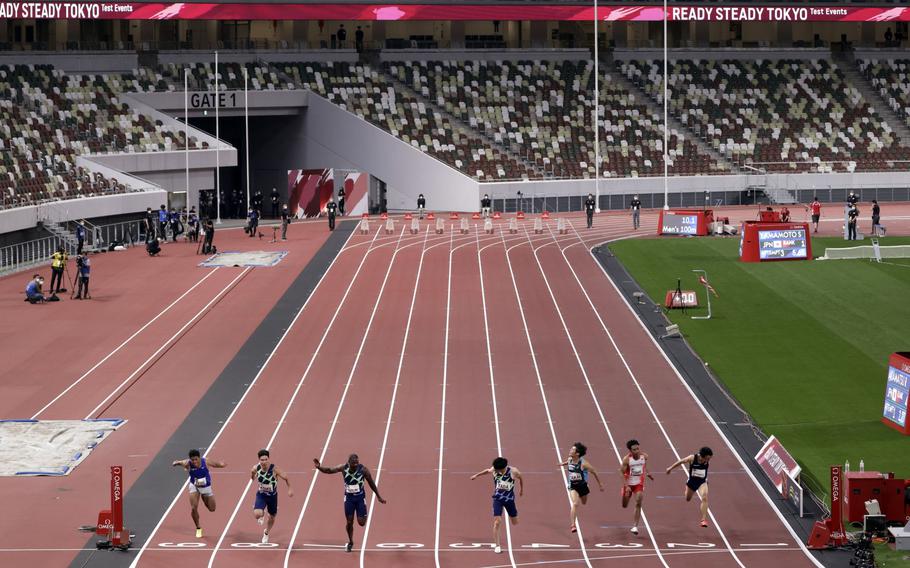 Athletes compete during an Olympics test event at the National Stadium in Tokyo on May 9. (Kiyoshi Ota/Bloomberg)

The Tokyo Olympic Games is reaching the point of no return.

With seven weeks until the opening ceremony, the Japanese government, the International Olympic Committee and major stakeholders are gambling political reputations and billions of dollars on staging a games that could lift global spirits and show how we could begin a return to normality. Or, in the worst case, create a superspreader event that savages Japan's tottering economic recovery and blights the image of the world's biggest sporting showcase.

Mired in controversy since the coronavirus outbreak caused it to be delayed in early 2020, the event has become a weathervane for opinion on how governments and populations should beat the virus. Initially, the goal was to delay the 205-nation spectacle until the pandemic was under control. But as months passed and vaccine rollouts struggled to quench new outbreaks, the tournament has become symbolic of a divide between those who want to keep restrictions until COVID is stamped out, and those driven by the financial and reputational cost of not holding the event, even while the threat remains.

Here's what's at stake, whether the Olympics go ahead or are canceled at the last moment, from the reputation of Japan's top political echelon to the investments of sponsors, governments and organizers, as well as the health of the city's population and the dreams and well-being of the world's greatest athletes.

The economy: Scrapping the Olympics could inflict a direct economic loss of as much as 1.8 trillion yen ($16.4 billion), according to Takahide Kiuchi, an economist at Nomura Research Institute Ltd. But the economic fallout could run much wider than that. As well as the lost spending by participants, their entourages and local residents, the cancellation would be a blow to the mood of the nation that could depress spending and investment across the economy. Organizers are already having to count the cost of a ban on overseas spectators, whom Tokyo had hoped would help pay for all the stadiums and infrastructure built for the event.

Yuki Masujima of Bloomberg Economics goes even further, with a worst-case analysis that sees most of this year's projected growth wiped out should the games be axed. His 1.7 percentage-point hit to the economy is based on a worsening local COVID outbreak triggering the cancellation of the event and forcing the government to extend restrictions.

Even worse would be the Olympics going ahead and turning into a superspreader event. While it's not his main scenario, Kiuchi says that could put Japan into an emergency that would be more costly than calling off the games.

On the other hand, a successful Olympics could have the reverse effect, not only bringing in revenue and boosting spending, but lifting the mood of companies and households. In an ideal case, it would propel a shrinking economy in emergency mode into a recovery that would be further fueled by an accelerating vaccination drive.

It might also have an even larger effect globally, sending a signal of optimism around the hundreds of nations that tune in to watch their athletes compete. 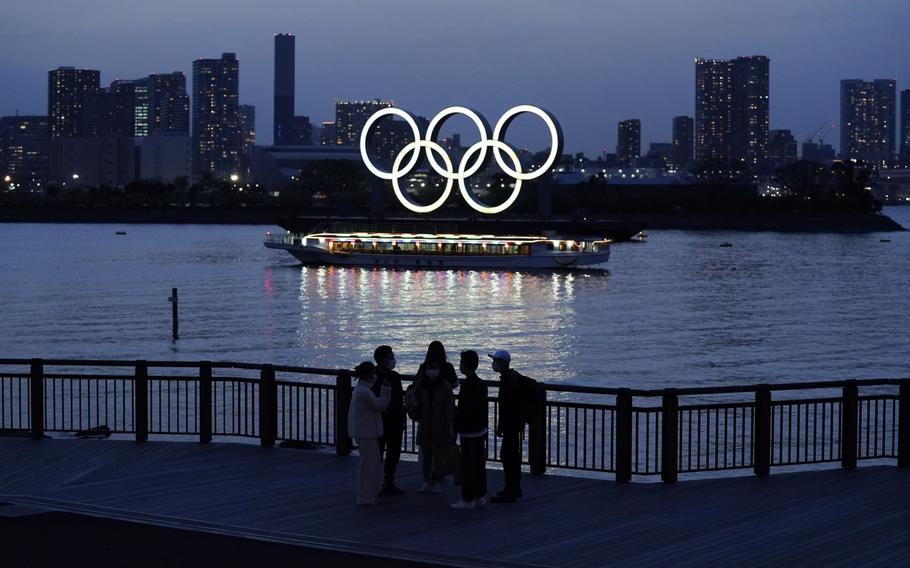 The politicians: Japanese Prime Minister Yoshihide Suga is gambling his job on pulling off a successful games in the face of opposition to the event from the general public and many top business leaders. He faces a party leadership election by September and general election that has to be held by October. While his ruling Liberal Democratic Party is unlikely to be toppled by a splintered opposition in the national vote, Suga's prospects are more precarious.

His support rates are at their lowest since he took office in 2020 and a catastrophic Olympics and public backlash could propel Suga toward the revolving door that dispatched six premiers in five years before his predecessor.

Even a safe and successful games may not bolster Suga's public approval rating. While the typical trajectory shows voters in host countries turn from curmudgeonly to exuberant when the Olympic flame is lit, he still faces judgment on his handling of the nation's vaccine rollout.

Others have also found that the games can be double-edged. U.K. Prime Minister David Cameron got no particular boost from London 2012, according to a survey following the games, despite widespread praise of the event. By contrast, then-London Mayor Boris Johnson became a favorite to take over as premier following the games.

The medics: Japan's medical establishment is becoming increasingly nervous about bringing together 78,000 people from around the world for the Olympics and Paralympics.

Organizers had initially planned to have about 10,000 doctors, nurses and medical staff on standby for the games, but have had to cut that number to about 7,000 because of the need for staff to deal with ongoing outbreaks. And organizers are struggling to meet even that. Only 80% of the reduced goal has been achieved, according to Seiko Hashimoto, president of the organizing committee. That's almost half the original goal.

"We have strong reservations about hosting the Olympics at the expense of the lives and health of patients and nurses," said Susumu Morita, secretary-general of the Japan Federation of Medical Worker's Unions.

Failure to ensure enough medical support for the spectators, athletes and delegations, could mean a decision to ban not only overseas fans, but also local spectators, leaving athletes performing in empty arenas.

The broadcasters: While spectators in the stands are a boost for the host city, the Olympics has long been about broadcasting rights - beaming events to more than 3 billion viewers. Comcast Corp. paid $4.4 billion to have its NBC network show the Olympics in the U.S. from 2014 to 2020 - about $1.1 billion per tournament - and the station is proceeding as if the Olympics will begin as scheduled.

NBC executives are betting that pent-up demand from last summer's postponement will help drive higher viewership and turn around recent ratings declines for the games. That would be a boost for the network as it has already agreed to pay another $7.75 billion to air the games from 2021 to 2032. It's a big money spinner for the company, which earned $250 million from the 2016 summer games in Rio de Janeiro.

The financial consequences of another postponement or cancellation aren't clear. In March 2020, just before the pandemic forced the games to be delayed, NBC said that it had sold a record $1.25 billion in advertising for the Olympics. The company hasn't detailed what happened to those advertising commitments. Some customers may have re-purposed that spending on other NBC programming last summer, others may have asked for their money back.

Discovery Inc., which broadcasts the Olympics in Europe, is counting on the event to promote its new online streaming service, Discovery+, while NBC is pushing its own service, Peacock, at home. Both companies say they are insured against the games being canceled.

"There should be no losses should there not be an Olympics," Comcast Chief Executive Officer Brian Roberts said last year before the games were postponed. But he also said that if the games didn't occur, there "wouldn't be a profit."

The insurers: Among the biggest casualties should the games be canceled are the insurance companies that have underwritten the risk for not only the broadcasters, but also the national teams, sponsors and hundreds of other companies and organizations that depended on the event.

The cost of cancellation to insurers is estimated to be $2 billion to $3 billion, hitting an industry already battered by 2020 losses. That includes the approximately $800 million taken out by the IOC in event cancellation insurance plus the additional cover purchased by the local organizing committees and likely claims from broadcasters, sponsors, professional sports teams and hospitality, according to Bloomberg Intelligence analyst Charles Graham.

Swiss Re said in March last year, just before the postponement of the games, that the Tokyo Olympics posed the biggest single risk at the time to the world's second-largest reinsurer, with a potential hit of $250 million. A spokesman for the company confirmed last week that remains the case.

Munich Re, the world's largest reinsurer, confirmed that it is involved in insuring the Tokyo Olympics and would be "affected" if the games were called off, but declined to provide additional details about its exposure. Aon Plc, which last year agreed to buy Willis Towers Watson Plc to create the world's largest insurance broker, declined to comment on what impact a cancellation may have on it.

Even so, for individual insurers, any potential impact won't derail their earnings outlooks, Graham said.

"It would be the largest single event loss but not large enough to be a major earnings event," Graham said. "To give some perspective, the two largest global reinsurers - Munich Re and Swiss Re - alone incurred $2.7 billion of event cancellation losses in 2020."

The athletes: For athletes in more than 30 different sports, the quadrennial Summer Olympics is the most important event in their calendar, not only for the glory of achieving the pinnacle of their sport, but also because it can determine rewards, sponsorship deals and professional careers. Just making an Olympic team requires a huge investment in time, dedication and money.

"The Olympics are pretty special," said Brady Ellison, 32, an archer in Team U.S.A., who is hoping for gold after winning bronze and silver medals in previous Olympics. "When you train for the Olympics, your life runs in four-year segments."

Training to be at peak performance for July 2020 and then finding the games has been delayed caused extra hardship, stress and expense for many participants. For Filipina weightlifter Hidilyn Diaz, 30, it meant seven months away from her family while she trained in Malaysia.

If the games don't go ahead, retiring athletes will probably never see another chance to win a medal at the Olympics. For those who are able to compete next time around in Paris 2024, it will be back to training and world tournaments to prepare, in three years instead of four. 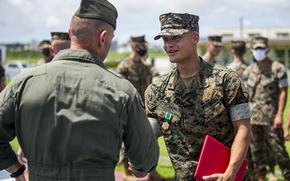