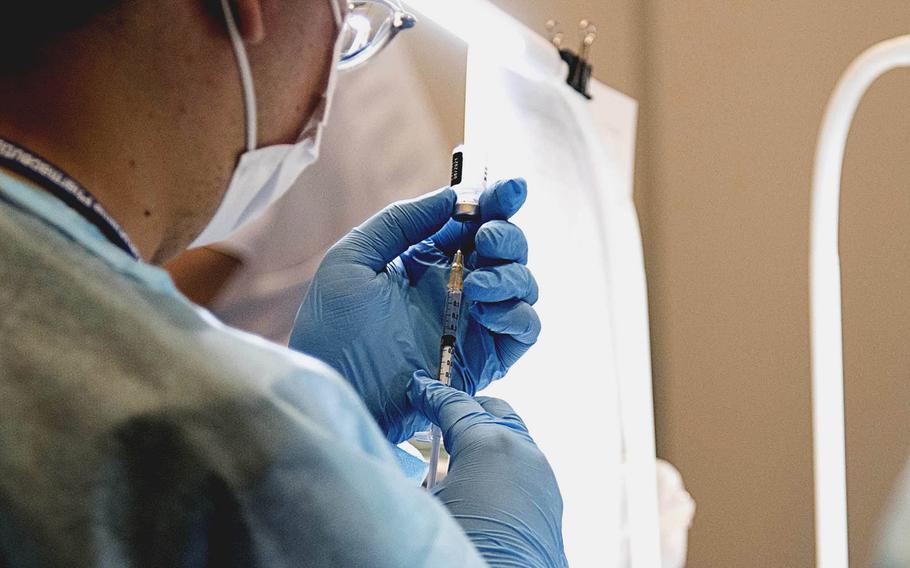 Buy Photo
A medical technician prepares a dose of coronavirus vaccine at a mass vaccination site in Yokohama, Japan, May 17, 2021. (Akifumi Ishikawa/Stars and Stripes)

The order signed Tuesday by Maj. Gen. Viet Luong, commander of U.S. Army Japan, and publicized Wednesday permits anyone fully vaccinated on an Army base to remove their masks indoors or outdoors, with some exceptions, including in medical facilities and in proximity to Japanese citizens. Unit commanders may set stricter rules.

On all U.S. installations in Japan, anyone unvaccinated must continue to wear a mask, with exceptions such as at home, in a vehicle with family members and outdoors and socially distanced. Off base, anyone associated with the U.S. military is required to wear masks, according to orders issued this week by U.S. commanders in Japan and Guam.

Japan, which is setting up mass vaccination sites in its largest cities, is behind other developed nations in getting its citizens inoculated against COVID-19. About 1.6% percent of the population is fully vaccinated, according to the Johns Hopkins Coronavirus Resource Center.

A person is fully vaccinated two weeks after a one-shot vaccine jab or the second of a two-shot vaccine, according to the U.S. Centers for Disease Control and Prevention.

Naval Base Guam also relaxed its mask mandate Wednesday to allow fully vaccinated individuals to go without a face covering indoors and outdoors. It follows Andersen Air Force Base, which eased its mask policy earlier this week.

The Army, headquartered at Camp Zama 26 miles southeast of central Tokyo, had one person test positive between May 12 and Wednesday, according to an Army news release. The individual had recently arrived in Japan and was quarantined during the test.

The Marine Corps reported one new case at Camp Foster on Okinawa, according to a Facebook post by Marine Corps Installations Pacific on Wednesday.

In South Korea, the Army reported that a South Korean employee at Yongsan Garrison in Seoul tested positive for the disease May 12, according to an Army news release Wednesday. That person has been quarantined at home since April 27 after having contact with a previously infected person.

Japan on Tuesday reported 5,204 new cases of coronavirus, the fifth day of a decline in one-day new cases from 6,927 on May 13, according to the Johns Hopkins center.

Still, some prefectures reported new COVID-19 cases in numbers that generated requests to broaden the public health emergency that covers nine prefectures, including the two largest metro areas, until May 31. The national government added Hokkaido, Hiroshima and Okayama prefectures to the list on Sunday, according to public broadcaster NHK.

Okinawa Gov. Denny Tamaki said he would request a state of emergency for his island prefecture, where he expected the one-day new case count to exceed 200, NHK reported on Wednesday. The number of new coronavirus infections recorded daily on Okinawa has risen from less than 50 in early May to 168 on Tuesday, the pandemic high, according to the prefecture’s online database.

Tamaki told reporters in Tokyo the fast-spreading infection is creating a sense of crisis on the island, according to NHK.

Tokyo on Wednesday reported another 766 people had become infected, 203 fewer people than tested positive the same day a week ago, the NHK report said.