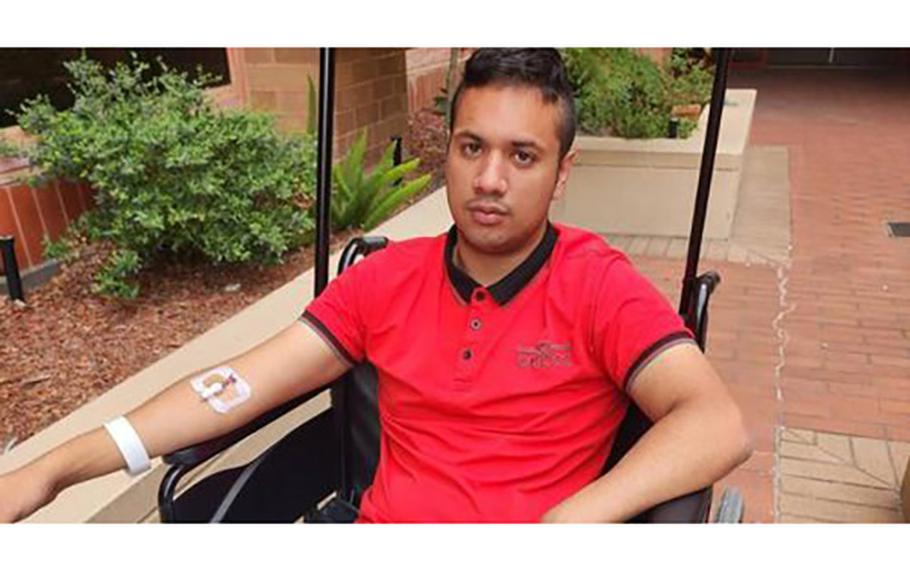 Osman Khan as seen after a prisoner swap between Venezuela and the United States. (Facebook)

(Tribune News Service) — Of all the depravity he says he endured while imprisoned in Venezuela, Osman Khan will never forget the smiles on his torturers’ faces.

When military intelligence officials interrogated the 24-year-old American, demanding to know if he was a spy and where he stood on a Venezuelan political system of which he knew nothing, they had a good laugh.

When Venezuelan guards held him at gunpoint, forcing him to write down a list of random words that he later learned would be used to frame him, the officers joked with one another.

And when Khan was first detained, driven to an indistinct house in a residential area near Colombia’s border, three officers chuckled as they sucker punched him to the ground, threw him onto a metal gurney and strapped him in.

“They put this rag over me that smelled of gasoline,” Khan told McClatchy and the Miami Herald in his first interview since his release. “They started pouring something on me and just started drowning me. I seriously thought I was going to die.”

“It’s not like they kept asking me questions,” Khan added. “They just kept doing it and doing it, and it seemed like they were getting pleasure out of it.”

Khan was one of seven U.S. citizens wrongfully detained in Venezuela released in a prisoner swap between Washington and Caracas on Oct. 1. Of all those released, he was the youngest and perhaps least prepared for the trauma he endured.

A fresh graduate of the University of Central Florida when he was detained, Khan is still suffering the physical toll of his detention and torture, which resulted in regular seizures he experiences to this day.

He has decided to speak with the press, he said, because he is determined to help free the Americans who were left behind in Venezuelan custody.

At least six U.S. citizens remain in Venezuela that are suspected of being detained for political purposes.

“I’d like to see the other Americans get home who are in Venezuela. That’s why I’m doing this interview,” he said. “I think it’s wrong to use Americans as political pawns, and to treat them as inhumanely as they’re treated.”

When Khan was in college studying finance and real estate, he dated a Colombian girl, once visiting the country to meet her family. Their relationship eventually ended, but his love affair with Colombia continued, and he decided to work remotely from the country after graduating school during the height of the coronavirus pandemic.

While in Colombia, Khan met another girl, of Venezuelan descent. They took it slow at first.

“We’d go out on excursions,” Khan said. “We’d go out for walks. We didn’t even have our first kiss until after about a month of going out together.”

Several months into dating, her father visited them for New Year’s Eve, and strongly encouraged him to cross the border into Venezuela to meet the rest of her relatives.

“Her family wanted to get to know me,” Khan said. “Her dad was so intent on me meeting her family as a sign of respect that it overwhelmed both of us.”

Khan agreed to make the journey, but her father told them to cross the border relatively far from their hometown, raising suspicions. His girlfriend’s half-brother, a member of the Venezuelan National Guard, assured them that they would be safe. So Khan proceeded with the plan in January of this year.

A taxi was waiting for them right as they crossed the border and they were immediately apprehended.

After an initial interrogation at a military complex, Khan and his girlfriend — who he has chosen not to name to protect her — were taken to the indistinct torture house.

It reeked of urine and feces, Khan said, and “looked like a scene out of a horror film.” In one of the rooms, a group was handcuffed behind their backs with their faces to the floor, seemingly for days. In another, people were stacked like logs on a pile, defecating on one another.

Between torture sessions, Khan was placed on a metal bunk bed with springs sticking into his back.

Finally, he was told he could leave if he passed a lie detector test.

Officers led Khan into a room, slapped him around and stripped him naked. They ordered him not to move as they latched him with metal clasps.

“That’s when they started electrocuting me,” he said. “It felt like a million needles around my body. It was so bad that, after they were done, I fell down and started throwing up. And they tried to force me to eat my own vomit.”

Khan paused for a moment. “It was gruesome,” he said.

Only then was he taken to the lie detector test, his guards and the test proctor smiling throughout.

He was finally let go from the torture house. But instead of taking him to the border or a civilian airport, Khan’s captors brought him to a military airfield. He was going to Caracas.

Khan would later learn that, from this point on, he was in the custody of DGCIM, Venezuela’s military intelligence unit.

DGCIM officers kept asking Khan if he was a spy. Yet by that point — after attempting to bribe his family for all the money they had on the false promise of his freedom — they had learned more about their prisoner, including details of his simple life in Winter Garden, Florida, and his recent college graduation.

They put him in a frigid cell, doused him with cold water, frequently beat him and occasionally injected him with unknown substances, he said. He was not served food or water for his first five days there, leading to rapid weight loss and forcing him to resort to drinking toilet water. The window on his door cell was kept shut.

“And then one day, I hear an American faintly talking. I heard Matthew Heath’s voice for the first time,” he said, referring to a Marine Corps veteran released alongside Khan on Oct. 1. “I’ll be honest, it was really nice — because when you don’t hear from people for a while, and all you hear is banging noises, it’s frightening.”

Despite that glimmer of hope, Khan attempted to take his own life with a shard of glass from a mirror in his cell, he said.

Khan believes the suicide attempt was captured on a cell camera, prompting guards to rush to his care. From that point on, the window on his cell door remained open — and he was able to yell across the prison hallway to the other Americans, getting to know their stories.

Heath started sending Khan food and clothing, and explained to him what he had learned about Venezuela’s practice of detaining Americans for political leverage. Khan discovered that he was part of a larger game.

“I was being used as a pawn, a chip by the Venezuelan government — Matt explained to me that that was going on,” Khan said.

Khan, Heath, and five Citgo oil executives imprisoned for years in Venezuela were told they were going home just hours before a prisoner swap was set to take place on the tiny Caribbean island of Canouan in St. Vincent and the Grenadines.

The American prisoners boarded a small plane without being told where they were flying — and joked that they could very well be heading to Cuba. “Up until the end, they treated us like criminals,” Khan said.

Khan remembers first feeling relief when a modern American jet landed, parking perpendicular to a shoddy Venezuelan plane — a maneuver he believed was intended to prevent the Venezuelans from taking off without the exchange completed.

The prisoners’ bags were thrown on the tarmac, and they were told to grab their bags, one by one, and run toward the American aircraft. The Citgo executives departed first, followed by Heath and Khan.

“When I entered that jet, I started crying. Cheers of joy. I don’t think I’ve been happier in my life,” he said.

Khan convulsed in a seizure on the return flight home, and was rushed to medical care upon landing in Texas. He missed the group photos with the rest of the released detainees. “I was out of it,” he said.

His recovery continues at home in Winter Garden with his family.

“I’m still dealing with the PTSD and the seizures — I’m still trying to get all that under control,” Khan said. “But thank god, overall, I’m happy. I’m happy to be home, happy to be with my family. Happy to be free.”