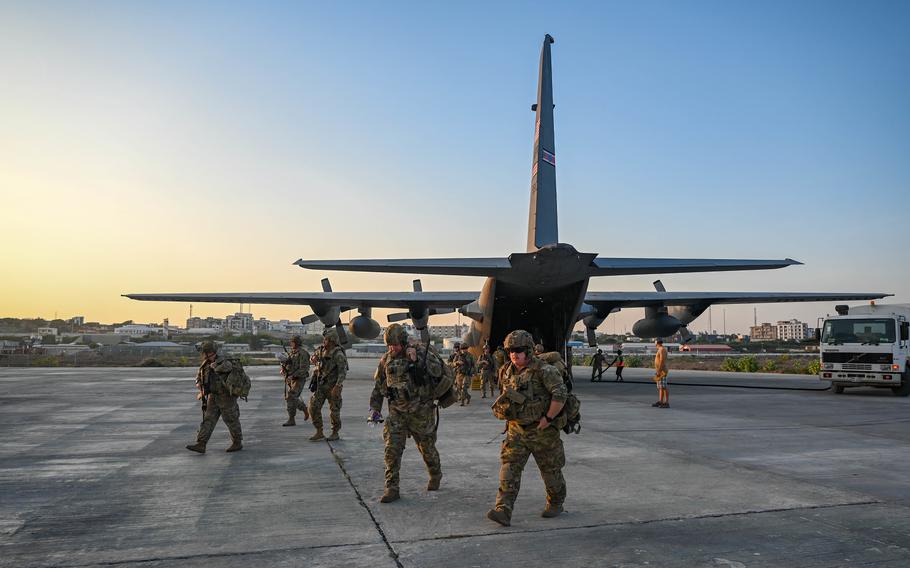 WASHINGTON — The United States has engaged in Africa for decades, though it needs a more modern approach to defending interests and allies there, the Defense Department said Thursday, particularly because China and Russia are expanding their reach into the world’s second-largest continent.

That’s the message that Defense Secretary Lloyd Austin will bring to the U.S.-Africa Leaders Summit next week, a senior defense official told reporters at the Pentagon. The event’s main purpose is to implement a new American strategy jointly with Sub-Saharan Africa that aims to add long-term stability and deepen relations — especially in places where Russia and China are making inroads.

“This strategy reframes the region’s importance to U.S. national security interests,” the White House states in its 17-page U.S. Strategy Toward Sub-Saharan Africa. “This strategy articulates a new vision for how and with whom we engage.”

“The United States firmly believes that it’s time to stop treating Africa as a subject of geopolitics — and start treating it as the major geopolitical player it has become,” Secretary of State Antony Blinken said in a statement. “The United States knows that, on most of the urgent challenges and opportunities we face, Africa will make the difference.”

The summit opens Tuesday and will run through Thursday. It’s being hosted in Washington.

On Thursday, the Pentagon stressed the importance of the meetings and their focus on issues such as defense, climate change, economic growth and ongoing coronavirus recovery.

A senior defense official told reporters that the Pentagon is taking a “3D approach” to the summit — defense, development and diplomacy — during this time of heightened conflict in the world and rising influence and aggression from Russia and China, countries that the U.S. views as two of its top challengers.

“Our focus is to make sure we work with partners so they understand challenges when they work with strategic partners,” the defense official said who spoke on condition of anonymity. “We respect African sovereignty.”

The defense official said there’s ongoing concern about basing efforts by Russia and China in parts of Africa. CNN reported in the summer that Russia was mining gold in Sudan to help finance its war in Ukraine and Moscow made a deal in 2019 allowing its naval forces to use Sudan’s ports. There was also an agreement to build a Russian base in Sudan, though the status of that deal is unclear.

As for China, there’s concern about Beijing’s basing efforts in Djibouti and Equatorial Guinea, and loaning money to African countries.

“China is doing infrastructure building and engaging from an economic perspective, which is different from what we are doing,” the defense official said. “Our concerns are more with partnerships Equatorial Guinea gets into with China.”

In recent months, President Joe Biden and the Pentagon have identified China as the top U.S. competitor and weaved strategies to mitigate harm to U.S. interests and allies — especially in the Indo-Pacific region, which reaches the eastern shores of Africa.

“The United States has an abiding interest in ensuring the region remains open and accessible to all and that governments and publics are able to make their own political choices,” the White House said in a statement. “Open societies are generally more inclined to work in common cause with the United States, attract greater U.S. trade and investment, pursue policies to improve conditions for their citizens and counter harmful activities by the People’s Republic of China, Russia and other actors.”

Along with Russia and China, Somalia — where U.S. forces again have a persistent presence — is also expected to be a key subplot at the summit. The Pentagon said troops in the country have produced “tangible” results in the past several months in helping Somalian forces fight off al-Shabaab terrorists.

Former President Donald Trump pulled U.S. forces from Somalia to focus troops elsewhere, but Biden ordered the return in May believing it essential to supporting Somalia’s armed forces and warding off al-Shabaab.

The senior defense official on Thursday attributed the tangible progress to three factors — the return of U.S. troops, a change in leadership and Somali forces standing on their own.

“The return to persistent presence has given confidence to Somali leaders and forces,” the official added. “Those three things, that’s really where I see the tangible results. ... Because there is this full court press."

U.S. officials have underscored several other priorities that will garner attention at the summit, including hunger, education, infrastructure and systemic racism in Sub-Saharan Africa, which includes all nations below the Sahara Desert.

“We believe in the nations of Africa,” Biden said in a statement. “Through the challenges ahead, although they are great, there is no doubt that our nations, our people, the African Union — we’re up to this task.”